The Army contract is being administered by the U.S. Navy and its Supervisor of Shipbuilding, Conversion, and Repair (SUPSHIPS) in Pascagoula, Miss.

Speaking at the ship's christening, James B. Emahiser, the Army's first program executive officer for troop support said: "This new generation of logistics support vessel will enable the Army to fulfill its logistics-over-the-shore (LOTS) mission by providing a ship which is not dependent upon external cranes nor port facilities. ... Its ramps, fore and aft, will provide drive-through capabilities, facilitating the transport of containerized, bulkbreak, and roll-on/roll-off cargoes from ship-to-shore at... the world's ports and unimproved beaches." The all-steel Somervell is 273 feet long, with a 60-foot beam, and 16- foot 5-inch depth. Her two General Motors EMD-16-645-E2 diesel engines can propel the ship at approximately 12 knots, and she can transport between 900 and 2,000 short tons of cargo with a range of over 5,500 nautical miles. Crews will consist of six officers and 24 enlisted men.

The supply ship is named in honor of Army General Brehon B.

Somervell, who was head of the Army Service Forces during World War II which provided most of the logistics support for troops overseas.

While on detached service, he served as chief of the Works Progress Administration (WPA) in New York City, and supervised various projects, including the construction of La Guardia Airport. Another of his construction projects included the building of the Pentagon in 1940.

Mr. Emahiser said the General Somervell will be assigned to the 604th Transportation Detachment, Washington Army National Guard in Tacoma. The ship will be used throughout the Northwest Pacific to support the 9th Infantry Division (motorized), I Corps, and the Washington and Alaskan National Guard.

The vessel will also participate in joint exercises with British and Canadian forces.

Moss Point Marine, Inc. is part of the Trinity Marine Group which is owned by Trinity Industries, Inc. of Dallas, Texas. Other members of the shipbuilding group are Halter Marine, Inc., with shipyards in Moss Point, Miss., and Lockport, La., Equitable Shipyards, Inc., withu facilities in New Orleans, and Madisonville, La., and Gretna Machine and Iron Works, Inc., Harvey, La. 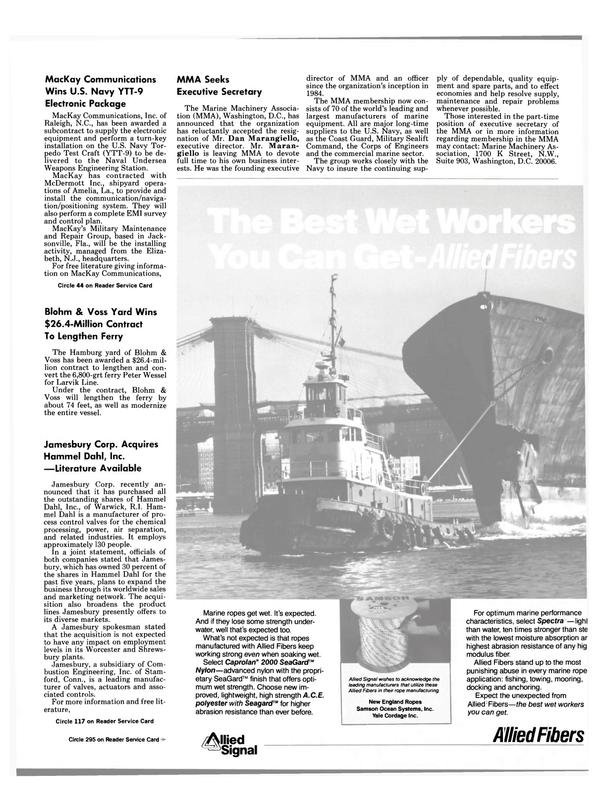