As might be expected when losing the most significant navy newbuilding project for a generation, Bath Iron Works (BIW) filed a protest with the General Accounting Office (GAO) challenging the fairness of the Navy's DD(X) evaluation process. The Northrop Grumman-led Gold team in a mild surprise was awarded $2.9 billion initial design contract in late April. Bath Iron Works was the leader of the BLUE Team in that competition; a team that included Lockheed Martin Corp., United Defense Industries, Northrop Grumman Electronic Systems, L-3 Corp. and others.

Cameron, in a statement cited three main issues: Test-Bed Hull Advantage The use of a Spruance-class DD 963 hull for atsea testing of the radar was cited by the Navy as one reason the GOLD Team had "significant" strength in its Radar Engineering Development Model. Yet, on January 16, 2002, in response to the BLUE Team's specific request to use a DD 963 hull for its engineering development models, the Naval Sea Systems Command formally said, "No." In an email on that date, NAVSEA wrote: "The NAVSEA position is that we will not entertain a leasing or other agreement at this time to lease, loan, grant, sell, etc., a DD 963 Class ship in furtherance of the BLUE team effort ..." Firewall Failure Firewalled information was used as a discriminator in rating the GOLD Team radar solution.

One of the GOLD Team members, Raytheon, had developed the SPY-3 radar under a separate and pre-existing contract. The Navy established a firewall to screen SPY-3 radar engineering development model data from both teams. However, the same Navy personnel were involved in reviews both inside and outside the firewall and in evaluating the GOLD Team's proposal. In fact, the Navy has conceded: "Source selection technical evaluators' knowledge of Phase II data concerning the radar suite integration approach, provided by the firewalled Raytheon personnel, provided confidence that the integration approach proposed by the GOLD Team was achievable..." This indicates that the Navy used "behind the firewall" information as a significant factor in its evaluation of the GOLD team proposal. By conducting an evaluation that effectively reached over the firewall.

the Navy undid the protections that the BLUE Team had relied upon for two years. The firewall built by the Navy to prevent an unfair advantage to the GOLD Team failed its essential purpose.

This double-counting was pivotal in the award to the GOLD Team. 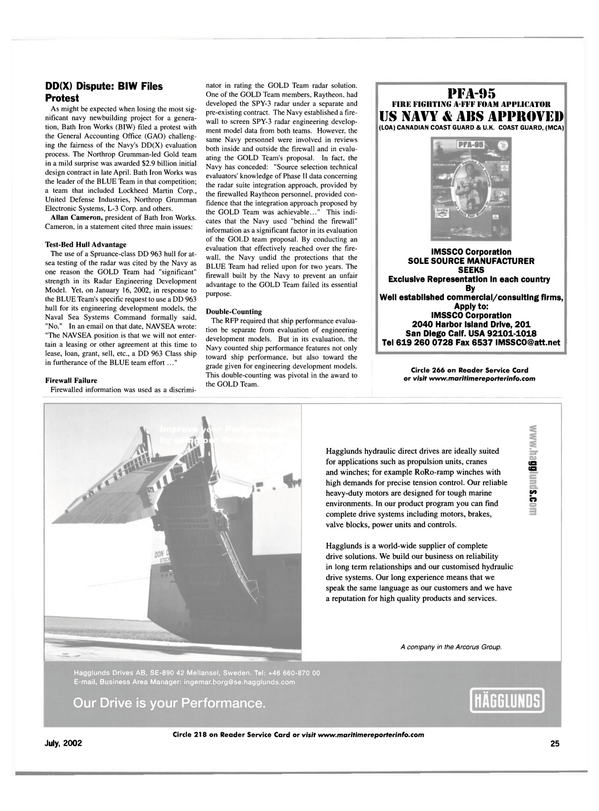