Technological Wonder, No Matter How You SLICE It

"Lockheed Martin is the only corporate entity represented by a ship," said George Root.

Advanced Programs Director for NE&SS-Marine Systems. Sea SLICE'S role in FBE-J is unique in that most of the crew — about two-thirds of the vessel's 20 person complement — will be Lockheed Martin personnel, with the remainder representatives from the armed forces. "We have a 35 mm gun, torpedo and missile capabilities, which is a good combat suite for a small littoral combatant," Root said. "We are a fast, stable gunboat, with the capability to escort ourselves in an armed fashion." Of particular interest is the fact that engineers will be the actual combat equipment operators, said Joe Wenderoth, Integrated Products Team Leader. This will afford the designers a frontline view of how the various systems work in the user environment of the future, providing an unequalled opportunity to integrate this experience into making a superior product.

The Pick-Up Truck Perhaps the Sea SLICE is best described as a mid-size pick-up truck with a large cargo bay, as it offers a large, flat, stable work platform from which to conduct military or commercial operations.

While Sea SLICE was invited by the Navy to exhibit its prowess as a modular base from which to conduct a variety of tasks, the vessel itself is considered a surrogate technology, meaning that the final product will like extract a number of its innovative features, but not be the entire vessel, per se. The secret of Sea SLICE'S success lies in its stability, which is significantly aided by its 2:1 length to width ratio, as well as its innovative hull design.

The ship has an advanced hullform that provides for outstanding stability and speed in high sea states and is capable of 30-plus knots in wave heights of up to 12 ft. (Sea State 5). This hullform is a variant on SWATH (Small Water-Plane Area Twin-Hull) technology and has four separate underwater hulls that provide buoyancy, propulsion, and excellent hydrodynamic efficiencies. The ship is controlled by a patented PC-based canard and stabilizer steering and motion control system.

SLICE technology is predicted to yield speeds of 45 knots in Sea State 6 (13 to 20 ft. seas); however a larger ship with greater propulsion than the existing Sea SLICE vessel is required.

Piece-by-Piece Modularity, or rather the ability to quickly change the operational hardware aboard the Sea SLICE, is one of its major selling points for military applications. The 110-ft. (33.5-m) vessel during FBE-J will enjoy the connectivity of any other Navy Ship, including an aircraft carrier, via its 1.1- m KU band antenna, among other systems. This connectivity — and the inherent ability to collect, disseminate and receive data — combined with the ability to reconfigure the vessel in a number of hours — from perhaps a minehunting vessel to a missile attack boat — is central to the Naval Warfare Development Command's work toward a network centric Navy.

"We give you a flat, wide deck capable of carrying lots of things," said Wenderoth. "We supply power and data." The ship can be reconfigured quickly by virtue that it incorporates Bolt-on, Bolt-off technology — as commonly found in the container shipping business, utilizing a hand tool to secure and loosen the bolts. This system is even used to secure weapon systems to the ship.

"(For FBE-J) we'll be working on overnight evolutions," said Wenderoth. "We'll be out all day long at sea, and change out configurations overnight, making the ship ready for morning." In exercises to highlight this modularity, the Sea SLICE will be required to perform all of the following over the two-week battle experiment.

1 Minehunting with towed sonar 2 Minehunting in shallow water with UUVs 3 Transformational Tactical Targeting technology utilized by simulated Loitering Attack Munitions (LAM) and Precision Attack Munitions (PAM) from the NetFires system, a system created by DARPA 4 High Volume fire support capability A modular Combat Information Center (CIC) in the deckhouse will provide all command and control and systems integration to effectively engage in all live fire and simulated events during FBE-J.

The name SLICE refers to how the ship moves through rough waters.

The concept, obviously, has drawn interest from the commercial side of the business, but perhaps of more urgent note is the interest from those entities charged with devising a coastal security system aimed at thwarting future terrorist attacks in the U.S. 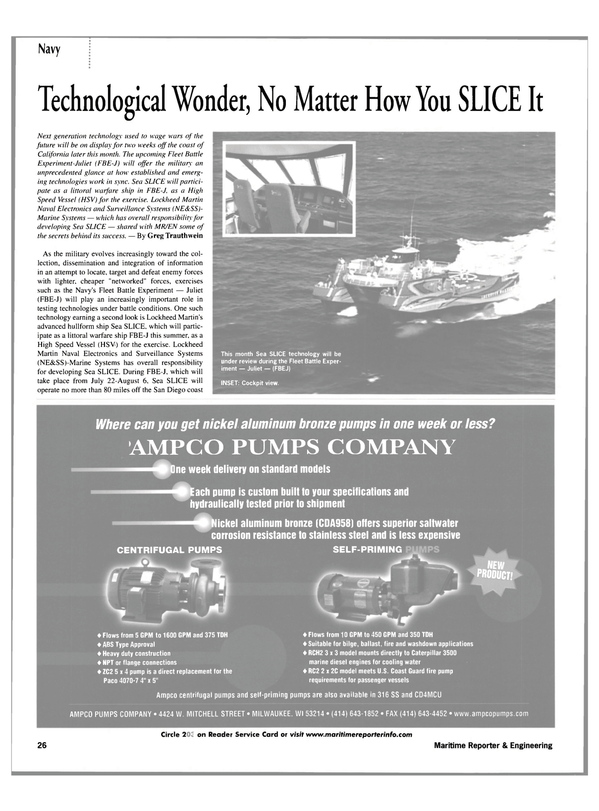 Read Technological Wonder, No Matter How You SLICE It in Pdf, Flash or Html5 edition of July 2002 Maritime Reporter