The European Union is on track to start its own satellite navigation and positioning system, Galileo, as it was earlier this year announced that the Council of Transport Ministers released the $44 million needed to develop Galileo, and at the same time adopted the regulation establishing the joint undertaking responsible for operating it.

Galileo is being developed as a commercial alternative to the U.S. GPS system, and tentatively is scheduled to be up and running by 2008. While markets are varied, and much of the advantages are touted in terms of savings to the airlines, the maritime sector, including offshore oil and gas exploration, has been targeted as a major market for the project.

The $3.1-billion Galileo project, which has been developed in conjunction with the European Space Agency, will enable users to accurately determine their positions in time and space at any given time, via a constellation of 30 Medium Earth Orbit satellites. The push is on to commence service by 2008, a date which seems achievable at this time, as GPS III is expected to commence operation by 2010.

"Europe has finally taken the political decision to launch this strategic program.

Today we are seeing the creative side of Europe," declared Mrs. Lovola de Palacio, the Commission Vice-president responsible for transport and energy. "It will help Europe to maintain its autonomy, its sovereignty, its technological capacity and control of its knowledge," she concluded.

More than a Satellite System In the 1980s, the United States developed the satellite navigation system known as GPS (Global Positioning System), initially for military purposes.

Interest in its civil applications grew quickly, and today GPS — replaced, in certain areas, by the Russian GLONASS system, also of military origin — is used for navigation by an increasing number of sailors, aviators, and car drivers.

A system made in Europe "Europe's dependence on these two external, military systems over which it has no control places it at a disadvantage," explains Matthias Ruete, director of the Trans- European Networks for Transport program.

"Their links with defense priorities provide no guarantee of development and dependability for the future.

But this future is crucial in determining the development of an integrated European transport sector. Added-value services and equipment linked to the growth of navigation systems could represent a market worth Euro 35 billion in the next decade and generate large numbers of skilled jobs." (1) In short, the Galileo project is seen as important for European political interests as it is for commercial viability and real market need. While the system will undoubtedly offer new products and services that will be embraced by shipping and offshore oil productions ever increasing need for timely, accurate positioning information, Galileo is viewed by politicians as a critical system in the event that the U.S. and Russian systems were pulled away for their intended purpose, that being military applications.

While Galileo will compete with the GPS system, it will also be designed to complement it.

"The Galileo project sets out to be perfectly compatible and redundant with GPS. The dovetailing of the two systems will make the whole more solid and more reliable," said Mrs. Loyola de Palacio, "and it will help to prevent a monopoly situation and give everyone a choice." Galileo is Coming: Jump On The European Commission will organize in Brussels at the beginning of October 2002 an information day for enterprises wishing to participate in the Galileo program. Representatives from the Commission, the Galileo Joint Undertaking, ESA and from a consultant will inform enterprises on the development of the program, the steps leading to the choice of the future concessionaire and the numerous services based on satellite radio navigation.

Simultaneous translation will allow for speeches in French, German and English. 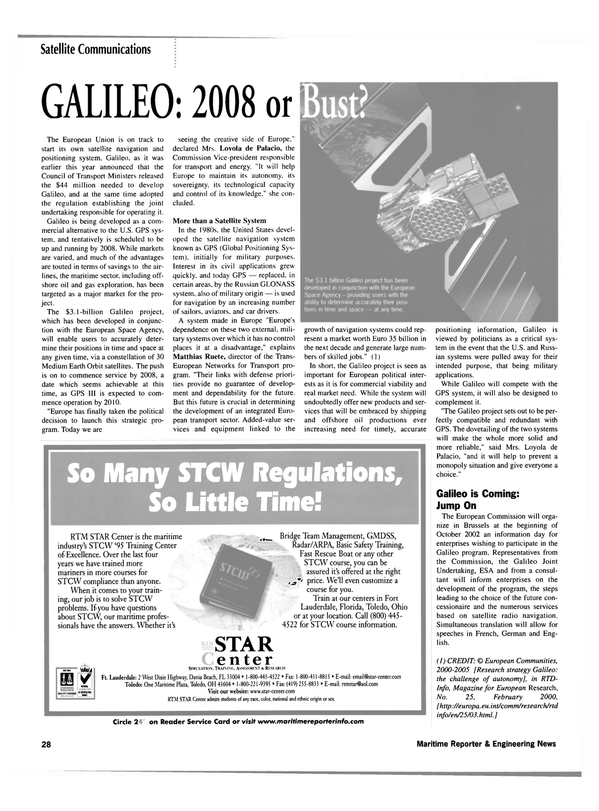