With a strong history of building some of the greatest liners to sail the seas, with names such as Rex, Saturnia, Vulcania, Leonardo da Vinci and Grand Princess to its credit, Fincantieri continues its tradition to this day as a leading ship builder, particularly in the cruise ship segment. Fincantieri — which is comprised of seven shipyards and two centers for ship design, with the one in Trieste being the largest in Europe — has developed a long tradition in designing and building ships, with more than 200 years of history marked by the construction of more than 7,000 ships. While the entirety of the Fincantieri system is geared toward generating technically superior products, it can be said, simply, that the Italians build beautiful cruise ships. But ships, despite their aesthetic appeal, are only truly beautiful in a corporate environment if they are profitable for the bottom line, and Fincantieri has seemingly emerged with a plan for profitability. Last year it launched its "Challenged to Succeed" project, which, in essence, challenged each employee, both white and blue-collar alike, to collectively yet individually improve quality and results. The plan seemingly had its desired result, as Fincantieri recently announced a net profit of $44.6 million for 2001, compared to an $11.6 million profit in 2000.

Another Princess The Fincantieri reference list contains some of the finest cruise ships ever built, and that tradition was continued by its Monfalcone yard earlier this year with the delivery of the passenger vessel Star Princess.

The 109,000-ton, 951 x 118-ft. (290 x 36-m) Star Princess (sister of the Grand Princess and Golden Princess) was commissioned by the British ship owner P&O Princess Cruises. The ship carries its 4,160 passenger and crew — situated in 1,300 passenger and 630 staff cabins, at a speed of 23 knots. A high 72 percent of the cabins have an external view. The ship, a floating luxury hotel, has been fitted out to the highest standards of comfort and offers a wide range of entertainment: for example, three theatres, five swimming pools, three restaurants, numerous bars, shops of various types, a beauty center, a library and a spectacular disco with a breath-taking view located in the ship's tail flap, nearly 60 m above the surface of the sea. Fincantieri's shipyard at Monfalcone built a previous series of seven ships for the same ship owner: the Grand Class series (the Sun Princess, Dawn Princess, Sea Princess and Ocean Princess, all 77,000 gt, as well as the Crown Princess and the Regal Princess, both 70,000 gt) and is scheduled to build another sister ship of the Golden and the Grand and the Star which will be delivered at the end of 2003.

Fincantieri is the world's leading shipbuilding in the cruise ship sector with a market share of 35 percentage.

Additional activities at Fincantieri's Monfalcone shipyard including the launching and commissioning of the cruise ship Carnival Conquest, by the American ship owner Carnival Corporation. The 109,500 gt ship measures 951 x 125 ft. (290 x 38 m) and has a cruising speed of nearly 23 knots. The ship will accommodate a staggering 4,950 people — 3,780 passengers and 1,170 crew — in its 2,117 cabins. Delivery of the ship is scheduled for the end of the year. Fincantieri will also build two sister ships for the same ship owner at Monfalcone; these are the Carnival Glory - the first block of which was laid on February 5, and the Carnival Valor, which are due for delivery in spring 2003 and in autumn 2004, respectively. 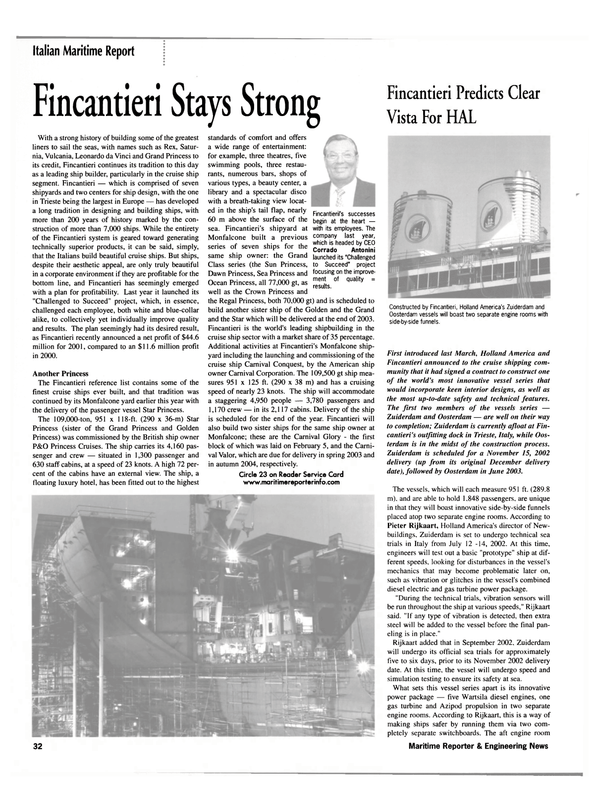