Having emerged in recent years among Europe's top echelon of builders of RoRo vessels, Flensburger Schiffbau- Gesellschaft (FSG) has put down a newmarker for the industry by anticipating demand for a future generation of RoRo ferries incorporating a capacity for 6,000 lane-m of freight.

Closely following its formalization of an order from North Sea and Baltic RoRo specialist DFDS for a fifth newbuild capable of loading 4,000 lane-m of road trailers, rolltrailers, cassettes, and other cargo, the German shipyard has unveiled its proposal for a 6,000 lane-m carrier.

The Flensburger offering, which has already attracted the interest of operators looking to achieve further scale economies on high-volume routes, combines an unprecedented arrangement of five trailer decks and flexible freight distribution with a rapid service speed of 23-knots. The design thereby promises high productivity as well as a major advance in unit capacity.

The German yard's international competitiveness springs from a continuing plough-back of funds into research and development and a preoccupation with efficiency as concerns both its homegrown designs and its in-house processes.

In setting out to formulate a state-ofthe- art RoRo incorporating more cargo space than any other design available on the market, FSGs technical team sought to ensure compact overall dimensions so as to keep initial investment costs as low as possible.

At 722 ft. (220 m) length overall, the 6,000 lane-m design is only 88 ft. (27 m) longer than the three-deck UND Akdeniz of 2,640 lane-m. and 'three-and-ahalf deck variants of 3.256 lane-m built at Flensburg for Turkish operator UND RoRo Isletmeleri. FSG's propensity for design development within a compact hull envelope was also expressed by the main dimensions of approximately 656 x 87 ft. (200 x 26.5 m) used for the milestone 4,000 lane-m class destined to make its debut in the DFDS Tor Line network during September next year.

In each case, though, the proposed new trailership behemoth is substantially more beamy, at 98 ft. (30.4-m) breadth. Good seakeeping behavior to ensure schedules and cargo safety on the most rigorous of shortsea freight routes has been a tenet of the design project, as has a turnaround capability that belies the huge cargo intake, to safeguard schedules.

The engine written into the provisional specification is a seven-cylinder version of the MaK M43 series from Caterpillar Motoren, for a total plant output of 25,200-kW.

Just as the 4,000 lane-m size has come to be favored by a number of Nordic operators besides DFDS, the 6,052 lanem design from Flensburg could be the next trendsetter. The as yet unique provision of five decks suited to trailerborne freight comprises four enclosed decks plus the weather deck, served by an inter-deck ramp system configured to allow simultaneous working of four different cargo areas. RoRo access is concentrated over twin stern ramps.

In the meantime. FSG is set to deliver the Hurst Point, the first of four 23,300-gt RoRo sisters contracted by British consortium AWSR for strategic sealift duties under a transport service agreement with the U.K. Ministry of Defense. The 2,600 lane-m heavilyreinforced design incorporates three decks, with the addition of a 36-ton crane on the weatherdeck, and further demonstrates the German yard's propensity for meeting bespoke RoRo requirements within the bounds of efficient production practices. 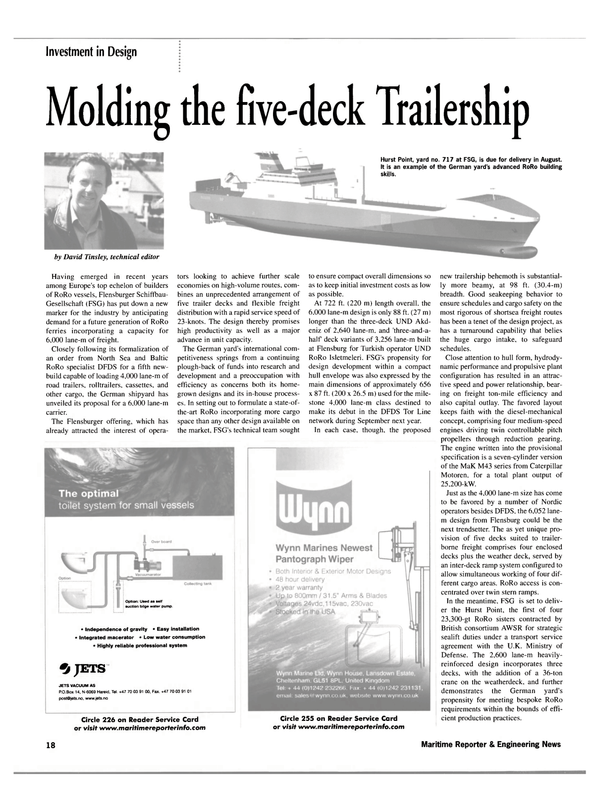