Last month U.S. Secretary of Transportation Norman Y. Mineta announced the award of $92.3 million in grants to 51 ports to enhance the security of ports and other facilities. (See full listing below).

"Protecting seaports and port facilities against the threat of terrorism is imperative," said Secretary Mineta. "The terrorist attacks have resulted in a renewed focus on the security of our transportation systems and we at DOT are aggressively meeting these challenges on several fronts." At a press conference near New York City's Staten Island Ferry, the Secretary was joined by New York City Police Commissioner Ray Kelly, and Port Authority of New York & New Jersey Vice Chairman Charles Gargano, as well as a host of federal representatives including Rep. Bill Young, (R-Fla.); U.S. Coast Guard Commandant Admiral Thomas Collins; and U.S. Maritime Administrator William Schubert.

In addition, $5 million is provided for security assessments that will enable port and terminals to evaluate vulnerabilities and identify mitigation strategies for their facilities, and $9.3 million wiU fund "proof-of-concept" projects, which will explore the use of new technology, such as electronic seals, vessel tracking, and electronic notification of vessel arrivals, to improve maritime security.

Congress provided funding for the grant program to the Transportation Security Administration (TSA), which is responsible for security in all modes of transportation.

TSA, along with the Maritime Administration and the U.S. Coast Guard, reviewed project applications and is administering the grant program. 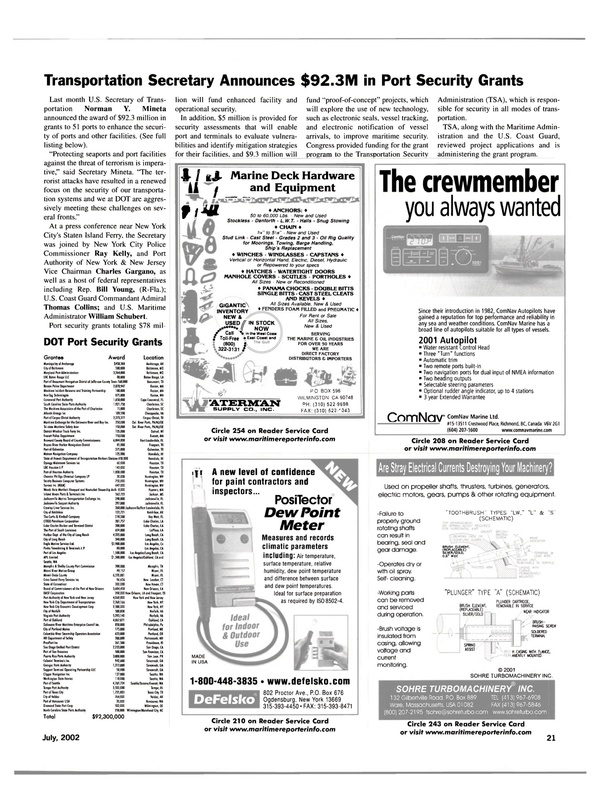