Tribon M2 applications for machinery, piping, outfit and cabling have been extensively enhanced, and the new Tribon M2 Data Management reportedly leads to safer and better management of the Tribon Product Information Model (PIM). Together with other new features this will lead to an earlier start of production and to major overall savings According to Bruce Douglas, VP Sales, Tribon Solutions, "In the early design phase, calendar time is saved by working in parallel both internally as well as externally due to highly developed co-ordination possibilities. In the detail design phase man-hours are reduced through an efficient process to create production information and documents for the manufacture and assembly tasks. In the production phase material costs are reduced and man-hours saved thanks to high quality on the manufacturing information, which leads to better fitting, less rework and full utilisation of the machines in the workshops." Data Management Controls Design Data Tribon M2 Data Management is devised to fully control the development, approval and release of design data in a project. The application can be used for projects both inside and outside the design department in a shipyard according to the authority rules for the specific shipyard. The Tribon PIM holds information and documentation about the ship design, and information related to the manufacturing of the ship.

Tribon M2 Data Management is also used as a platform for communication with external PDM systems.

Circle 11 on Reader Service Card www.maritimereporterinfo.com PAL Indonesia Implements Tribon System PAL Indonesia has purchased the entire Tribon Shipbuilding system for design and production of ships at its shipyard in Surabaya. PAL Indonesia has chosen to implement the complete hull and outfitting applications of the Tribon system to increase the yard's automation and efficiency.

"By implementing the Tribon system we will be part of the Tribon infrastructure giving us increased opportunities to co-operate with more shipyards," said Dr. Ir Adwin H. Suryohadiprojo, president Director PAL Indonesia. 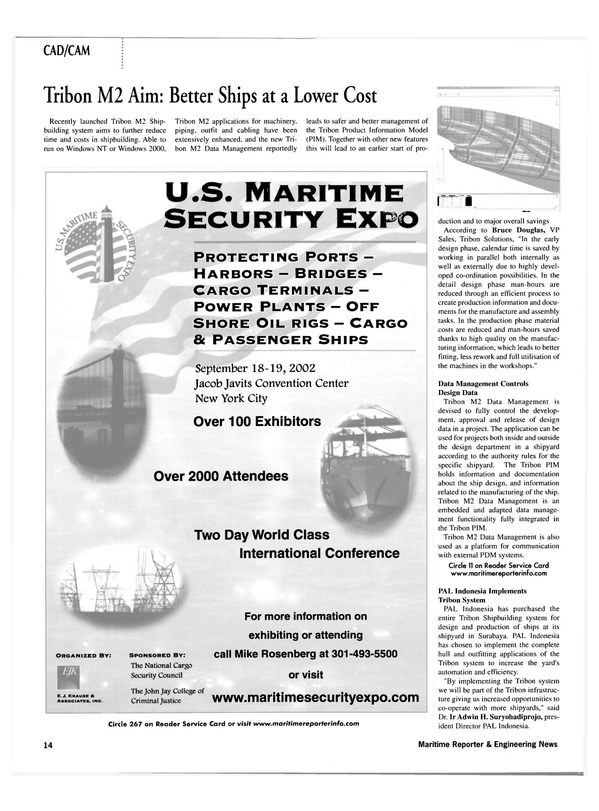