This self-propelled TSHD, named Daniel Laval, is designed to operate in water depths ranging from 1 to 3 m under the keel, and mainly in the Seine river estuary and in Dunkerque, according to shipowner sources. The vessel took just 21 months to build, as it was ordered in May 2000, and delivered in February 2002.

Daniel Laval is fitted with a trailing side suction pipe on starboard and bottom valves for load dumping. The dredge pump is driven by one of the propulsion diesel engines through a reduction gear. Dredging operational availability is 7,000 hours per year.

Loading and Unloading At a 66-ft. (20-m) dredging depth, the loading times are: • Sixty minutes for filling the hopper with fine sand to reach the maximum carrying capacity of 6,500 tons of sand having a d50 between 0.10 and 0.20 mm (based on the free flowing soil), • Twenty-one minutes to fill the hopper with silt having an average load density in the hopper of 1.25 ton/cu. m. for 5,000 cu. m. and having a d50 of 0.01 mm, with a hopper previously drained before the beginning of dredging operations. The accommodation deckhouse and the wheelhouse are located at the bow of the ship. Accommodation is arranged in 19 single cabins but the shipowner expects to employ 16 crew on board. A machinery deckhouse is located at the stern of the ship. Daniel Laval is propelled by two shaftlines equipped with controllable pitch propellers, each of the shaftlines driven by a diesel engine.

The ship is also equipped with a bowthruster to enhance manueverability. 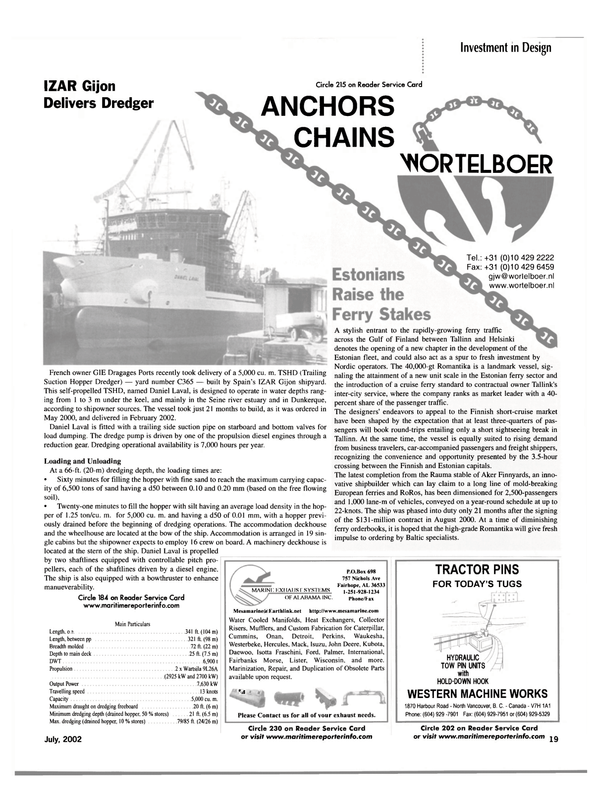