Touted in the pages of the trade press, including MR/EN, for more than a decade has been the "need or speed" which gripped the burgeoning fast ferry market. Upon meeting with Sam Crockford on the occasion of Posidonia 2002, it is sobering to learn that the "bigger, faster, more" mantra has quieted somewhat in recent years.

"No one is trying to push the envelope (techno- logically) anymore, said Crockford, noting that the technology level has leveled out, and saying Rodriquez Cantieri Navali has a long history of supplythat the market opportunities lie in the small and i n g f a s t ' t e c h n i c a " y danced vessels, mid-size ferry markets. "Basically, a 35-knot boat with good accommodations is what people want." Crockford reasons that fuel costs, and the voracious fuel appetites of the ultra fast class, ultimately led operators to re-evaluate the logisitcs of fleet management. He said that, in lieu of running one very fast boat, owners seem more apt to purchase a pair of smaller, slower vessels.

Considering that Rodriquez Cantieri Navali, founded in 1887 in Messina on the island of Sicily by Leopoldo Rodriquez as a repair yard, has carved a considerable niche in designing and building very large, very fast ferries, one might conclude that the builder is not faring so well. Nothing, however, could be further from the truth, as the yard counts on the trifecta of the ferry, yacht and patrol boat markets to keep its facilities in action. The diversification allows the company to jump on a given market immediately. The company's orderbook currently inculdes 10 passenger catamarans for Brazil, plus a pair of 84 m fast ferries and a 38 m catamaran; two yachts (one 38 m, another 72 in ); and 28, 25-m patrol boats for the Italian Coast Guard, of which 12 have already been delivered. The Brazilian ferry project is unique in that all of the ferries will be built in Brazil, resulting in Rodriquez Cantieri Navali setting up a company there. It has subcontracted out the business to three separate facilities: one to build the hulls, another to build the superstructures; and another for final assembly; to keep the project on track, which entails the delivery of seven 52-m/900-passenger (CityCat 40 DE) and three 29- m/200 passenger ferries (CityCat 28), Sarting in June 2003. 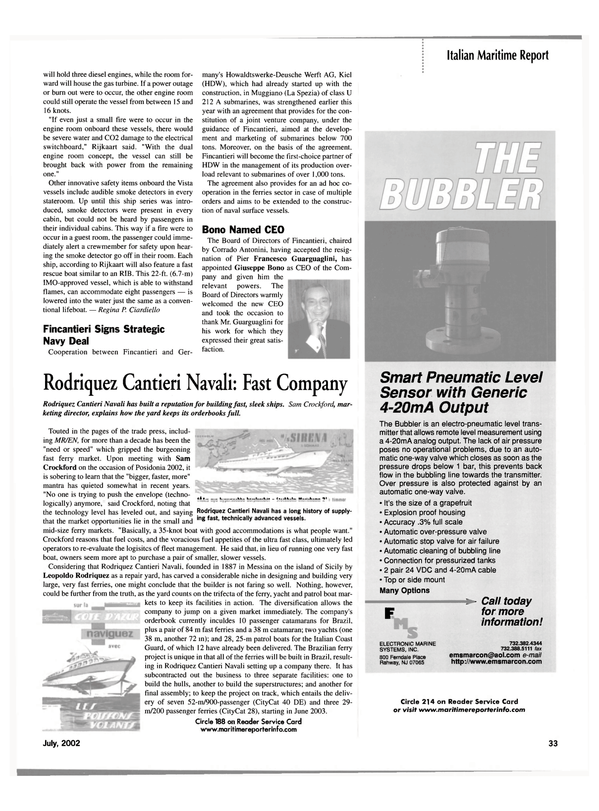