The marine industry, which traditionally hits a lull during the summer months, has been boiling over with new projects and business prospects, mainly centered on the business of keeping U.S. shores secure from further terrorist incursion. The Coast Guard Deepwater project, which was well in the works years before the date September 11 came to signify much of anything, after five years of planning has finally come to fruition in the form of a nearly 30-year, $17 billion plan to essentially re-shape the U.S. Coast Guard.

Yet even upon the awarding of the historic contract, there were rumblings from inside Washington. D.C., from Congressional powers. At issue are several matters, including the potential changing of the Coast Guard's operational role once it is fully integrated into the new Homeland Defense scheme, from that of search and rescue to fighting terrorism, as well as from those who question whether the Deepwater project should be rethought in the face of the recent terrorist attacks and threats.

In fact, in a Wall Street Journal article "Coast Guard Braces for Fight," (WSJ, Wednesday, June 26, 2002, page A4), Alaska GOP Rep. Don Young (R-Alaska), is News quoted as saying that Congress will alter those Coast Guard missions "over my dead body." When the stakes are billions and the government is involved, it's a good bet that proceeding from evaluation to contract will always contain some hitches.

Nevertheless, the recently announced deal is historic and will keep the U.S.

maritime industry busy for some years.

The deal, announced by U. S. Deputy Secretary of Transportation, Michael P.

Jackson, and by U. S. Coast Guard Commandant Thomas H. Collins, is a contract valued at $11.04 billion for a fleet of new ships and aircraft, plus improved command and control systems.

An additional $5.91 billion is contracted for operating, maintenance, and sustainment costs, bringing the package to a staggering total value of $16.95 billion.

The contract was awarded to Integrated Coast Guard Systems (ICGS), a joint venture established by Lockheed Martin and Northrop Grumman.

How Many? And When?

The program calls for the delivery of the first ships and planes — and upgrades to some existing vessels — within the next five years. This is the first time the Coast Guard has bundled procurement of several types of ships, aircraft and other equipment into an integrated procurement program. The contract may extend up to 30 years.

Deepwater will involve the acquisition of up to 91 ships, 35 fixed-wing aircraft, 34 helicopters, 76 unmanned surveillance aircraft, and upgrade of 49 existing cutters and 93 helicopters, in addition to systems for communications, surveillance, and command and control.

The historic program effectively has taken on the lead role in the effort to secure the U.S. from attacks through its ports. "The tragic events of September 11th changed the world as we know it.

Homeland security, now more than ever, is a mission where we must succeed," said Admiral Collins. "As the leader in Maritime Homeland Defense, the Coast Guard must have the most capable ships, aircraft, sensors and communications technology available to protect our nation and carry out our many missions.

The Deepwater Program will give us the necessary tools to create an effective, layered defense of our nation's maritime interests." 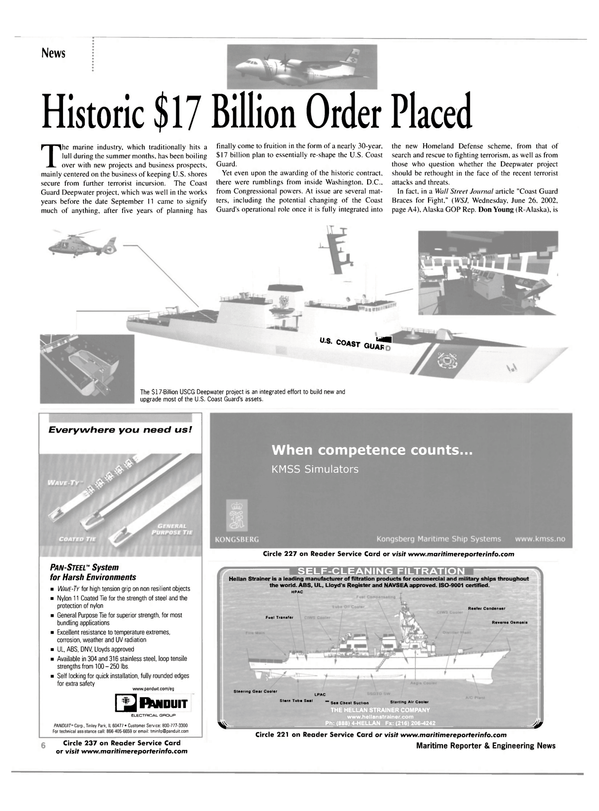