Coast Guard will have the authority to impose civil penalties of up to $27,500 per day against vessels that fail to submit ballast water management reports.

The basic ballast water management program has been in existence for some years, but submittal of reports has been largely voluntary since the agency lacked the power to require submittal.

As a result, participation in the program has been abysmal - at less than 30 percent.

It is expected that participation will rapidly become universal as the penalty regime takes hold.

The goal of ballast water management is to reduce the risk of transport in a ship's ballast tanks of aquatic species from one location to another where the species is not indigenous and may have no natural enemies. A prime example of dangers pose by nonindigenous aquatic species is the zebra mussel. In the early 1980s, these shellfish were apparently brought to the North American Great Lakes by ships involved in transporting wheat from the United States to Soviet Union ports on the Black Sea. Return trips were largely made empty, carrying only ballast water. Now zebra mussels invest the Great Lakes and other water bodies in North America, clogging water intakes and driving out native species.

While zebra mussels are the best known of the non-indigenous aquatic species, they are by no means alone.

The European Green Crab, now found on the both coasts of North America, is a voracious predator that feeds on bivalve mollusks and small crustaceans.

The Chinese Mitten Crab (which may have been introduced illegally as a food source) has spread through the San Francisco Bay region, burrowing into and weakening dikes and levees, as well as competing with local species. A recent study indicates that between 6 percent and 25 percent of the different species of plants and animals found in coastal waters of California may be non- indigenous. For many of these, it is too early to determine whether they will have deleterious impacts on the local biosphere.

In an effort to slow the spread of aquatic non-indigenous species, ballast water management programs have been introduced. One of the first was mandated for ships entering the Great Lakes from outside North America. These ships are required to demonstrate that they have exchanged their ballast water on the high seas while en route. High seas ballast water exchange remains the most widely accepted and widely utilized of the control techniques. This is true despite its downsides. Disposal of ballast water on the high seas may expose the ship to stability risks, particularly in heavy weather. Even the best current ballast water pumping systems do not fully empty the ballast tanks, leaving some water and sediment (along with the potential for non-indigenous critters) in the tanks when they are refilled. Some ships transit exclusively in coastal or shallow-water areas where ballast water exchange may provide minimal value. Australia has introduced a ballast water management program that includes a risk analysis to determine the likelihood that a ship's ballast water might contain harmful nonindigenous species.

To reduce the probability that ballast water would contain significant numbers of non-indigenous species, the International Maritime Organization (IMO) established a set of voluntary guidelines. These include cautions against uptake of ballast water in very shallow water or in darkness when bottom-dwelling organisms may rise up the water column. These guidelines were adopted by the U.S. Coast Guard (and have been made mandatory by the State of California).

The United States initially adopted a voluntary approach to ballast water management (except in Great Lakes and in the Hudson River north of the George Washington Bridge).

The original program included a requirement that ships arriving from overseas report what ballast water management techniques were utilized on the voyage, but the techniques were only recommended and there was no penalty for not utilizing them and there was no penalty for failure to make the report. After three years, the results were not good. Only about 30 percent of arriving ships submitted the reports and only about 50 percent of the reporting ships stated that they had exchanged their ballast water or utilized other techniques.

The Coast Guard asserts that a major reason for the new mandatory reporting requirement is to "generate more data that will allow for a more thorough understanding of ballast water delivery and management practices and how these relate to invasions of nonindigenous species (NIS) from vessel's ballast water on both a national and regional basis." A stronger basis for the regulation is that Congress mandated such an effort. The voluntary program was.

from the beginning, a three-year program to see if the marine industry would substantially participate on its own. When it did not, the Coast Guard had no alternative to making the program mandatory.

Once accepted, the installation could be utilized for the life of the ship. This effort promises long-term, albeit long delayed, benefits for masters and crew, who will no longer face the uncertainties and dangers of high seas ballast water exchange.

In addition to the reporting requirement, the Coast Guard has prepared a rulemaking to expand the mandatory ballast water management program from the Great Lakes and Hudson River to all U.S. waters. The draft rule was submitted for review to the Office of Management and Budget (OMB) on April 7, 2004. Its approval and subsequent official promulgation are anticipated shortly - possibly before this article you are reading is published.

The IMO has been engaged in a similar effort to improve ballast water management programs worldwide. An International Convention for the Control and Management of Ships' Ballast Water and Sediments was adopted in February 2004. Wide acceptance of the Convention is expected to follow rapidi y - The newly developed international standards and the proposed U.S. standards have minimal inconsistencies, which will hopefully remove any objections to U.S. ratification of the new Convention.

Ballast water management has moved from a vague concept to specific guidelines and soon to universally mandatory requirements in rapid succession.

Unfortunately, the technology is still in its infancy.

Ships are still relying largely on the antiquated method of ballast water exchange, with all its shortcomings and hazards. Both the new Convention and U.S. Coast Guard policy address prototype ballast water treatment technologies.

It is premature to predict when viable treatment equipment will be commercially available for use on ships. It is hoped that government regulation at the international, national, and local level will enhance, rather than impede, such development. 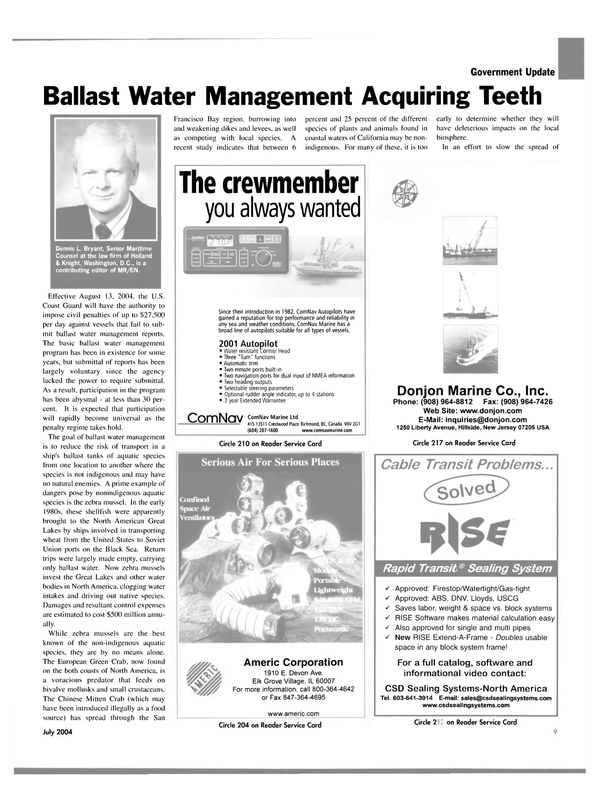