In early June, the third last Seawolf-class submarine was christened at General Dynamics - Electric Boat, in Groton, Conn. Mrs. C a r t e r , Former President J i m m y C a r t e r , their daughter A m y and a crowd of more than 4,500, were on hand to witness. "Five years ago, this vessel's distinguishing characteristic, the Multi-Mission Platform, existed only in the minds of a few," said Electric Boat President and General Dynamics Vice President John Casey. "Today, this notion has become a reality, providing this ship and submarine force with astounding capabilities." The Multi-Mission Platform (MMP) is the submarine's most celebrated feature. Specifically, the platform is a hull extension, making the 453-ft.-long PCU Jimmy Carter 100 ft. longer than the other two Seawolf-class submarines, USS Seawolf (SSN 21) and USS Connecticut (SSN 22).

"The key to this production has been the Integrated Product and Process Development approach - also known as the Design/Build approach," said Casey. "An entire 100-ft., 2,500-ton hull section, nearly as complex as an entire Los Angeles-class submarine has come from concept to construction and integration with the overall ship in just under five years. That's an amazing accomplishment." The MMP provides Jimmy Carter with a wealth of capabilities. It has an ocean interface that allows for the operation of a Remotely Operated Vehicle, which will be able to retrieve and deploy weapons, countermeasures and sensors. It's also Special Operations-friendly. Jimmy Carter can accommodate a Dry Deck Shelter or an Advanced SEAL Delivery System for Special Operations Forces (SOF). It has a Reconfigurable Cargo Area, which allows for stowage of SOF supplies, and it features a Command Center Suite for mission planning. The Jimmy Carter can also berth up to 50 SOF personnel. 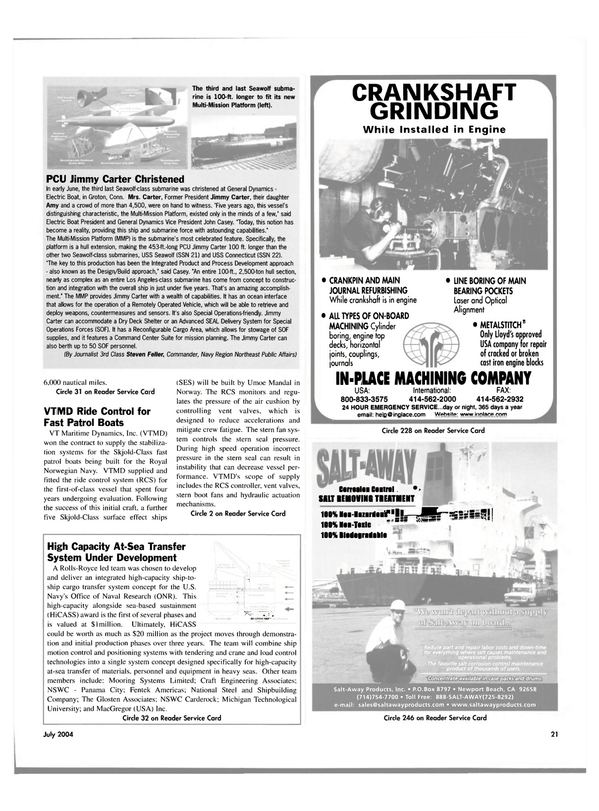