Crowley's petroleum services group has taken delivery of its newest tug. Avik, to serve in the company's oil transportation and distribution fleet. The 76-ft. tug was designed by Crowley's Vessel Management Services team and built by Dakota Creek Industries. It was delivered on June 3 and has been put into service in Alaska. The purpose-built tug was designed for both shallow water and ocean towing ops. It features a raised bridge for improved visibility, an electric tow winch for coastal towing and tendered push knees for river or beaching operations, and is powered by three Caterpillar 3406E diesel engines generating 1,350 hp.

It will handle barges transporting fuel and general cargo to communities in Alaska where shallow water and lack of docking facilities is common. In those cases, tugs and barges make a beach landing to load and unload cargo.

Crowley's petroleum services group is also adding another vessel to its fleet. Barge 1 80-1. also being built by Dakota Creek, is scheduled for delivery in July. This 180-ft. combination tank and deck cargo barge w ill be the first double-hull tank barge constructed specifically for Alaska service. It features a dual anchor system, coated cargo tanks, a pedestal-mounted deck crane, portable cargo ramps and onboard oil spill response equipment. The 180-1 will operate in either a push mode or as a conventional towed unit. 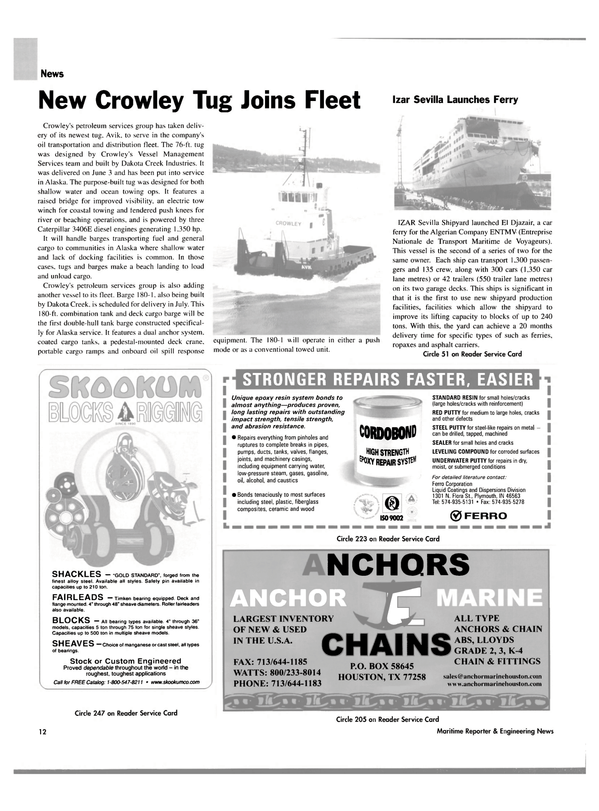