And Then There Were Two

The long-awaited awarding of the contract to construct the new series of Littoral Combat Ships (LCS). a series that could total 60 ships worth $14 billion over 15 years, will have to wait just a little longer. However, the U.S. Navy in late May did pare the competition to two, with teams headed by General Dynamics - Bath Iron Works and Lockheed Martin Corporation - Maritime Systems & Sensors tapped to continue construction plans. LCS has generated fierce competition among the few remaining, large corporate entities that dominate the military markets today. While General Dynamics ($78,798,188) and Lockheed Martin Corporation — Maritime Systems & Sensors ($46,501,821) will continue - both awarded contract options for final system design with options for detail design and construction of up to two Flight 0 Littoral Combat Ships (LCS) — the Raytheon-led team was eliminated. The LCS is a key component in military transformation, as it embodies the U.S. military's evolution towards a network-centric approach, which relies on a vast and integrated network of information that allows any number of air, land or sea assets to "plug-in" to successfully complete a mission. The LCS will, in essence be a smaller, faster craft when compared to traditional navy ships, operating as part of a network of information from land, air and sea-based assets, able to operate closer to shore — in the "littoral" — while being flexible enough to change its outfitting and alter its mission rapidly. "Today's Littoral Combat Ship decision represents an important milestone for the warfighter and the acquisition team," said John Young, assistant secretary of the Navy for research, development and acquisition. "The acquisition team is successfully changing how we buy ships — completing the source selection on schedule and developing affordable designs that can adapt to changing technology. The strong efforts by our industry partners have produced LCS seaframe designs that deliver solid value for the taxpayer's dollar and provide the speed, ride quality, and mission payload capacity sought by the fleet." Apart from warfighting, LCS will perform Special Operations Forces (SOF) support, high-speed transit. Maritime Interdiction Operations (MIO), Intelligence, Surveillance and Reconnaissance (ISR), and Anti-Terrorism/Force Protection (AT/FP).

"The future for the Navy-Marine Corps team requires our naval forces to dominate the near land battlespace and provide access for our nation's joint warfighting team," said Chief of Naval Operations Adm. Vern Clark. "LCS will deliver capabilities to enable our Navy to dominate in this critical littoral region. These ships will be a vital component of tomorrow's carrier strike groups (CSGs) and expeditionary strike groups (ESGs). We need this ship today." General Dynamics - Bath Iron Works Team The General Dynamics approach features a trimaran hull designed to enable the ship to reach sustainable speeds of nearly 50 knots and range as far as 10,000 nm with an unprecedented interior volume and payload.

With an eye on reducing manning demands, the ship is designed to allow a crew of fewer than 40 sailors to fully operate, maintain and defend it.

"We're very pleased to have been selected by the Navy to continue development of the design for this next generation of surface combatants," said I)ugan Shipway, president of General Dynamics Bath Iron Works. Bath Iron Works is the prime contractor on the program. Austal USA, of Mobile, Ala., a subsidiary of Australian shipbuilder Austal Ships, is supporting final design efforts for the team's aluminum and steel trimaran warship. General Dynamics Advanced Information Systems, of Arlington, Va., is leading the ship's open-architecture based Core Mission System design and integration from its Pittsfield, Mass. facility.

Other team members include CAE of Leesburg.

"This award is a major accomplishment in Austal USA's plans to become a major competitor in high speed applications for the U.S. defense programs." said Austal USA's CEO. Greg Metcalf.

Following completion of the 16-month LCS final design stage, the Navy will exercise options for Austal USA to build the first two ships. The first vessel will commence construction in late 2005 and the other in late 2006. Navy plans also call for the additional construction of three ships starting in 2007 and six in 2008.

Lockheed Martin Corporation - Maritime Systems & Sensors Team Lockheed Martin is teamed with naval architect Gibbs & Cox and ship builders Bollinger Shipyards and Marinette Marine. A number of international companies, including Spain's IZAR, are also contributing to the Flight 0, or initial production, program. If all options are exercised, construction of the first LCS will begin in January, 2005 at Marinette Marine with the launch scheduled in late 2006. Construction of the second ship will be at Bollinger Shipyards beginning in 2006. The Navy is expected to announce a selection for additional LCS Flight 1 production in 2007.

The Lockheed Martin-led team approach is an innovative semi-planing monohull seaframe, based on technologies introduced on the 60+ knot, 1,000-ton Destriero, which holds the trans-Atlantic speed record.

It was scaled up and used to build a series of 3,000-ton Jupiter class ocean-going vessels. Both ships were designed and built by Italy's Fincantieri. With a length of 378 ft. and a beam of 57 ft., the Lockheed Martin LCS will operate in less than 13 ft. of water.

"The ship will display extraordinary agility and speed in littoral warfighting operations." Gibbs & Cox is working closely with the team's shipyards to ensure a smooth and timely transition from final design to production. "We have been working closely with our partner shipyards throughout the design process to incorporate shipyard producibility initiatives into the final design products," said Kevin Moak, Chairman of Gibbs & Cox.

"ARL is proud that ShipConstructor is being applied to the LCS project by Gibbs & Cox Inc., Marinette Marine Corp. and Bollinger Shipyards Inc.

We are confident that the Lockheed Martin team will benefit from the new features added to ShipConstructor2005 under the NSRP Second-Tier Design Enhancement Program (STDEP). Future ShipConstructor functions will see a link between product lifecycle management (PLM) data and the ShipConstructor 3D product model in a virtual reality environment, thus lowering the total costs of ownership," said Rolf G. Oetter, President of Albacore Research Ltd. (ARL). "The simplicity of our LCS design is evident both in its performance as well as its producibility," said Dennis McCloskey, president of Manitowoc's Marine Group and Marinette Marine Corp.

"Producibility was built into the design from day one. And between both the Marinette and Bollinger shipyards, the team has the capacity and personnel in place today to build six ships per year in support of the Navy's long-term production requirements." The propulsion system consists of from two diesel powerplants and two Rolls-Royce MT30 gas turbines driving acoustically optimized waterjets.

The Lockheed Martin ship is designed to launch, handle, and recover manned and unmanned systems, such as small boats and robotic watercraft. The design uses an overhead tracked crane system for loading and handling mission packages, significantly accelerating ship reconfiguration both pierside and at sea with a small crew and higher levels of safety. "To give the Navy the ability to alter the mission of the ship in less than 24 hours is a transformational option that isn't available today," said Mike Ellis. COO of Bollinger Shipyards. "The same handling system is used for offboard vehicle launch and recovery. It allows a wide-variety of manned and autonomous mission vehicles to be launched or recovered simultaneously.

The ship's low profile enhances its stealth qualities, and supports excellent water access through stern and side doors, making it a superior platform for special operations forces." 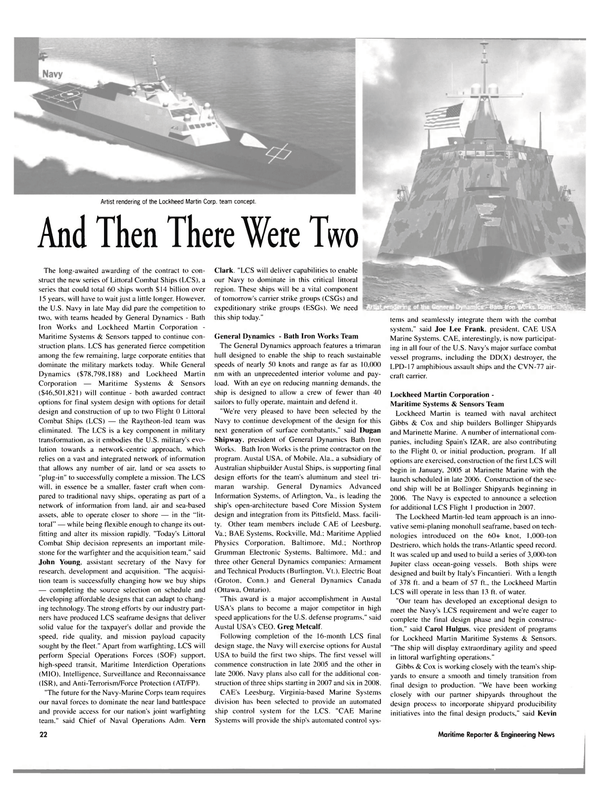 Read And Then There Were Two in Pdf, Flash or Html5 edition of July 2004 Maritime Reporter