Overseas 2 4 - H o u r Advanced Manifest Rule - Awareness All sea carriers with the exception of bulk carriers and approved break bulk cargo are required to provide proper cargo descriptions and valid consignee addresses 24 hours before cargo is loaded at the foreign port for shipment to the United States t h r o u g h the Sea Automated Manifest System. Failure to meet the 24-hour Advanced Manifest Rule results in a "do not load" message and other penalties. Through this program, administered bv DHS's Customs and Border Protection (CBP), the department has greater awareness of what is being loaded onto ships bound for the United States and the advance information enables DHS to evaluate the terrorist risk trom sea containers.

C o n t a i n e r Security Initiative (CSI): Awareness & Prevention Under the CSI program, the screening of containers that pose a risk for terrorism is accomplished by teams of CBP officials deployed to work in concert with their host nation counterparts.

I n t e r n a t i o n a l Ship and Port Facility Security (ISPS) Code: Awareness & Prevention By July l, 2004, countries around the world will have implemented the first multilateral ship and port security standard ever created. The ISPS Code requires vessels and port facilities to conduct security assessments, develop security plans and hire security officers. By establishing a standard for security, the world has increased its ability to prevent maritime related attacks by making ports around the world more aware of unusual or suspicious activity.

I n t e r n a t i o n a l Port Security Program: Awareness & Prevention Under this effort, the U.S. Coast Guard and the host nations will work jointly to evaluate the countries' overall compliance with the ISPS Code. The Coast Guard will use the information gained from these visits to improve the United State's own security practices and to determine if additional security precautions will be required for vessels arriving in the United States from other countries.

O p e r a t i o n Safe Commerce (OSC): Awareness & Prevention This pilot program analyzes security in the commercial supply chain and tests solutions to close security gaps. The technologies tested through the program will enhance maritime cargo security, protect the global supply chain, and facilitate the flow of commerce. DHS has awarded $58 million in grants to the private sector since its inception and will award another $17 million this summer to private sector companies.

In Transit Smart Box Initiative: Prevention One core element of CSI is using smarter, "tamper evident" containers that will better secure containerized shipping. Designed to be "tamper evident," the Smart Box couples an internationally approved mechanical seal affixed to an alternate location on the container door with an electronic container security device designed to deter and detect tampering of the container door. If someone attempts to open the cargo door after it has been sealed, the Smart Box device on the door would reflect that there had been an attempted intrusion into the container.

Together with the results of technology testing, Operation Safe Commerce, DHS will have valuable information to assist in developing performance standards for container security.

Ship Security Alert System: Response Like a silent alarm in a bank, a SSAS allows a vessel operator to send a covert alert to shore for incidents involving acts of violence, (such as piracy or terrorism), indicating the security of the ship is under threat or has been compromised. The International Ship and Port Facility Security Code requires new passenger and cargo ships of at least 500 gross tons to install this equipment by July 1, 2004. Existing passenger vessels and cargo vessels must have the equipment installed prior to the first radio survey after July 1, 2004, or by July 1, 2006. Other types of vessels may carry and use SSAS voluntarily.

9 6 - H o u r Advance Notice of Arrival: Awareness & Prevention Ships must notify the Coast Guard 96 hours before arriving in a U.S. port and provide detailed information on the crew, passenger, cargo and voyage history. This information is analyzed using databases and intelligence information, including reviewing previous security problems with the vessel or illegal activity on the part of the crew. Part of this analysis will also account for the security environment in previous ports of call. By obtaining this information well in-advance of a vessels arrival, the U.S. Coast Guard is able to make determinations about which vessels require additional attention, including security precautions such as an at- sea boarding or armed escort during transit to and from port. 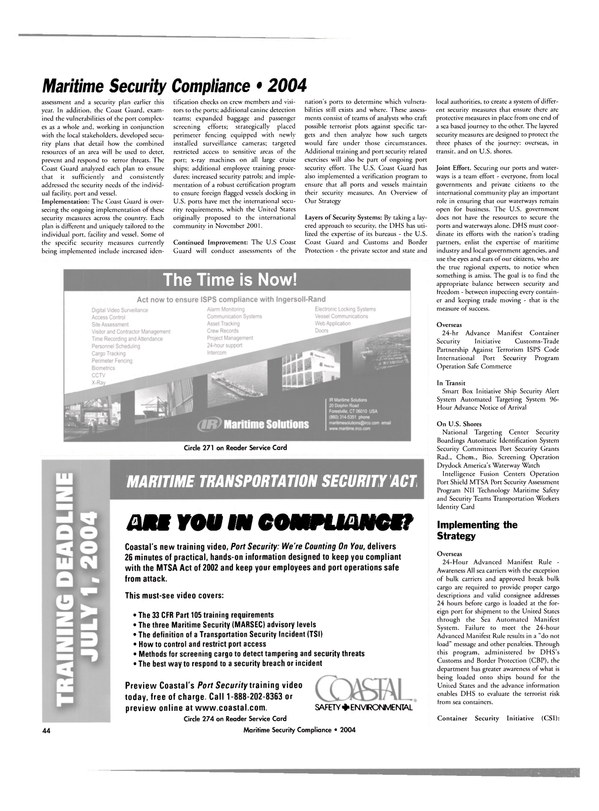