The N T C also supports operations in the Field including the Container Security Initiative (CSI) personnel stationed at critical foreign ports throughout the world.

M a r i t i m e Intelligence Fusion Centers: Prevention Located in Norfolk, Va., and Alameda, Ca., these units compile and synthesize intelligence products from the federal, state and local level dealing with maritime security. These intelligence products are then disseminated to homeland security professionals across the country responsible for securing our ports and waterways.

High Interest Vessels Boardings: Prevention Before they are allowed to enter port, all vessels are screened for the security risk they pose to the United States based on information about the vessel's cargo, size, voyage, security history and any intelligence information.

Those identified as higher risk are targeted for offshore boardings to ensure potential security issues are addressed prior to entry into port. In addition, the Coast Cluard randomly selects vessels for security boardings to ensure an element of unpredictability and thus deterrence. Specially trained Coast Guard teams board the boats through traditional water based methods or via fast roping from helicopters.

O p e r a t i o n Port Shield: Prevention Operation Port Shield focuses on the implementation and enforcement of the new security measures implemented under the i n t e r n a t i o n a l requirements or MTSA between June 15 and December 31, 2004.

Under this verification program, the Coast Guard will be boarding every vessel, at sea or at the dock, on its first visit to a U.S. port on or after July 1 to ensure that the vessel is complaint with U.S. security standards.

A u t o m a t i c Identification System: Awareness AIS is a type of vessel-tracking equipment that automatically sends detailed ship information to other ships and shorebased agencies, allowing for comprehensive, virtually instantaneous vessel tracking and monitoring, increasing security and safety in our shipping channels. Currently, most vessels required to use this technology are large vessels on international voyages. T he Coast Guard is exploring possible ways to expand these requirements to other vessels and other U.S. waters.

Area Maritime Security Committees: Awareness, Prevention & Response The Coast Guard has established committees in all the nation's ports to coordinate the activities of all port stakeholders, including other federal, local and state agencies, industry and the boating public. These groups are tasked with collaborating on plans to secure their ports so the resources of an area can be best used to deter, prevent and respond to terror threats.

Port Security Assessment Program: Awareness This program is aimed at increasing the information and best practices available to port officials across the country to help them make decisions about how to reduce the vulnerability of their ports. The Coast Guard is in the process of closely examining the key infrastructure in the nation's 55 most economically and strategically important ports for potential vulnerabilities.

Those assessments will be completed by the end of the year. In addition to these assessments, the Coast Guard is creating a system to display key port information in an electronic geospatially referenced format to serve as a database that can be easily searched for national, regional and local information.

Funds assist ports in analyzing vulnerabilities and then closing gaps in security through physical enhancements like access control gates, fencing, lighting and advanced communication and surveillance systems. The program also funds the implementation of security strategies to prevent and respond to terror threats. Over the past three years, $516 million in grants have been allocated and another $50 million are currently pending review.

N o n - I n t r u s i v e Inspection Technology ( N i l ) : Prevention Non-Intrusive Inspection (Nil) technologies allows U.S. Customs and Border Protection to screen a larger portion of the stream of commercial traffic in less time while facilitating legitimate trade. CBP officers use large-scale gamma ray and x-ray imaging systems to safely and efficiently screen conveyances for contraband, including weapons of mass destruction. These units can scan the interior of a full-size 40- foot container in under a minute. Inspectors also use personal radiation detectors to scan for signs of radioactive materials, as well as special high-tech tools such as density meters and fiber-optic scopes to peer inside suspicious containers. Finally, if necessary, containers are opened and unloaded for a more intensive manual inspection.

MSSTs were created in direct response to the terrorist attacks on Sept. 1 1, 2001. They have unique capabilities, including explosive- detection dogs, personnel trained to conduct fast- roping deployments from a helicopter to a hostile vessel, and anti-terrorism/ force protection small boat handling training. Eight teams are currently in operation and five more are scheduled to be commissioned by early 2005.

G u a r d i n g In-Between the Ports: Prevention Coast Guard, CBP Border Patrol, and Immigration and Customs Enforcement's Air and Marine Operations units are responsible for patrolling and securing our nation's borders between the ports of entry. During FY04 to date, DHS personnel have apprehended more than 770,000 illegal aliens on land and over 9,000 at sea. By adding additional personnel, equipment and technology, the Department of Homeland Security has been able to broaden the areas of coverage.

Through strong enforcement operations and the state of the art technology at the borders, the department has enhanced its operational effectiveness on the frontline.

Merchant mariner credentials are often used as an identification document that allows mariners to come and go from the ship while it is docked in a foreign port. This investigation, enhancements to the criminal background check process for applicants, and increased security features on the cards themselves, has increased the U.S.

T h e Prototype Phase will be conducted at 35 facilities in six states including the ports of Los Angeles and Long Beach, California and the fourteen major port facilities in the state of Florida. T h e prototype is f u n d e d with $50 million included in Homeland Security's Transportation Security Administration (TSA) budget and up to 200,000 port workers are expected to participate.

America's Waterways Watch: Awareness The goal of America's Waterway Watch is to help prevent acts of terrorism and other illegal activity that jeopardizes maritime homeland security by having members of the maritime and recreational boating industries, as well as the boating public, recognize and report to appropriate authorities suspicious activity that may be an indicator of potential terrorism. Any observations of suspicious or unusual activity could be extremely valuable to our national security and may provide clues to help uncover patterns of possible terrorist activity. Reports can be made to the Coast Guard, local law enforcement, or by calling 1-877-24- WATCH. 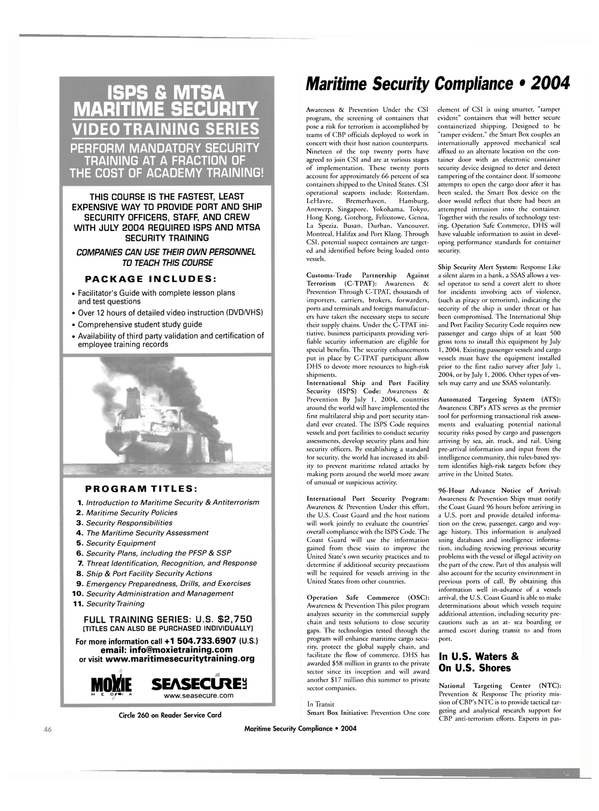