Having logged fresh orders from existing clients UN RoRo (formerly UND) of Turkey and Denmark's DFDS group, Flensburger Schiffbau-Gesellschaft has taken its tally of RoRo trailerships contracted in recent years to 23. The volume of business puts the German yard to the fore in European RoRo freight vessel construction, with a prolific, current output rate of four such newbuilds per annum.

FSG's assumption of a high profile in the RoRo category is a mark of thecompany's meticulous attention to production processes, materials and equipment procurement and logistics, build quality and design addedvalue.

Measures aimed at ensuring cost competitiveness in the international market are complemented by the maintenance of a large, in-house design resource, relative to the yard's modest size, and by an energetic commitment to research and development. Production is focused on a single, fully-enclosed building slipway, where hull dwell times have been progressively reduced.

Flensburg has emerged as a showcase for the competitive production of mercantile vessels in Europe, coupling investment in technological tools with the best German traditions in industrial enterprise, to give the lie to widely-held perceptions that Europe has no future in building ships of trade. For sure, FSG's position has been hard won, and its absence of complacency is a strength, signified by new design endeavors and by a readiness to apply its concept to other fields of construction in the event of a fall-off in RoRo demand.

The string of export contracts for high-capacity trailerships has added significance for the considerable inroads made into the European market by the Chinese shipbuilding industry, which has taken great strides in the RoRo domain, not least among Nordic owners.

The latest business secured by the yard comprises a sixth ship in the Tor Magnolia class of 3,831 lane-m North Sea RoRo for DFDS Tor Line, and a repeat contract from UN RoRo for two trailerships of 3,735 lane-m capacity.

Following completions of the first three DFDS ships. Tor Magnolia. Tor Petunia and Tor Primula, the new influx of work has boosted the present workload to seven RoRo freight vessels, comprising three of the new generation for DFDS, plus four of the latest design for the Turkish client.

The delivery program has thereby been extended to mid 2006. The Tor Magnolia series, known as the 'Flower' class, has brought a 37% hike in unit lane-m capacity, at just a small increase in length and breadth, in comparison with the Fincantieri-built Tor Selandia trailership type introduced in 1999 and 2000. Accommodating 253 trailers of 14-m length, the 'Flower' RoRos allow for yearround scheduling on the North Sea at 22.5-knots, about half a knot more than that of the Tor Selandia trio.

The width of the new ships is the absolute maximum for transiting the lock linking the tidal Humber with Immingham Dock, on the U.K. east coast, and the design is distinguished by the efficiency of cargo access and cargo working to the four freight decks. It is also unusual, in a shortsea RoRo context, for the adoption of a single-screw, single main engine installation, using a two-stroke 9L60MC-C diesel from MAN B&W.

The quartet of Turkish newbuilds on order at Flensburg have each been dimensioned for total freight stowage on four decks corresponding to 255 trailers of 13.6-m length, and will strengthen UN RoRo's services between Istanbul and the north Adriatic, an important conduit for Turkish hauliers and shippers. FSG delivered six ro-ros to the Turkish operator during 2000-2002, and the latest series will provide an advance in linear capacity on similar dimensions to the 3,256 lane-metre UND Ege type. Unlike the single driveline and low-speed diesel plant employed in the new DFDS generation, the Turkish ships have been specified with two medium-speed diesels driving controllable pitch propellers through reduction gearboxes.

Global Scope to Enviro Rules At long last. Annex VI to IMO's Marpol Convention has been ratified by the requisite number of countries representing at least 50% of world tonnage, opening a new chapter in environmental regulation. Samoa's ratification took the number of accepting states to the 15 needed to trigger implementation, such that international limits on nitrogen oxide and sulfur oxide emissions from shipboard machinery will enter force on May 19, 2005.

Many have welcomed the prospect of a firm date for the introduction of international regulation on air pollution from ships, fearing a proliferation of local or national rules, a process that is already well in train.

Nonetheless, the criteria laid down under the engine speed-related nitrogen oxide (NOx) emissions curve formulated by IMO established a common basis for the design optimization process needed to improve the environmental standing of marine diesel engines.

Moreover, the parameters laid down under Annex VI provide just a starting point for the industry, as progressively tougher international limits can be expected to be mandated in the years to come.

The regulations include a global cap of 4.5-percent sulfur content of fuel oil, and contains provisions for special 'SOx Emission Control Areas'(SECAs), in which the sulfur content must not exceed 1.5-percent.

Alternatively, ships must fit an exhaust gas cleaning system, or use other technological means to restrict SOx emissions. The first SECA will be the Baltic Sea, with effect from 2006. It is anticipated that the North Sea and parts of the English Channel will be designated as SECAs in 2007.

R e n e w i n g t h e R & D Base One hundred years on from the opening of the Felling site on Tyneside for the production of specialist marine paints. International Coatings' parent group has ploughed Euro 4-million into the creation of a new, purpose-built research and development laboratory at the U.K. premises. The project forms part of an ongoing program entailing expenditure of over Euro 10- million in the company's R&D facilities worldwide, including further development of the modern site at Koje Island, within the Korean shipbuilding heartland.

Additional work has also been carried out at the Asia Pacific Technical Center (APTECH) in Jurong Town, Singapore.

The commitment to Tyneside, the fountainhead of International Coatings' technology and manufacturing operations, and one-time shipbuilding giant, has particular significance given the migration of commercial shipbuilding activity to the orient. However, the Felling plant, one of 19 manufacturing facilities worldwide, has already demonstrated an ability to maintain keen competitiveness without the benefit of critical mass in the domestic market, through its current, annual output of around 30-million liters of paint for the European market at large. As home to Dutch-based owning group Akzo Nobel's Marine and Protective Coatings business unit, Felling has more than 100 qualified research staff, a highpoint of whose work has been the development of the revolutionary Intersleek technology.

The new Felling laboratory will play a signal role in maintaining the technical endeavors which underpin the compa- ny's leading global market position in the field. It will focus on the formulation of innovative antifouling technologies, newbuild coatings and maintenance and repair coatings for the shipping and yacht markets. "Innovation means keeping one step ahead of customer requirements," observed Rudy van der Meer, member of Akzo Nobel's board of management responsible for coatings. "It should not only enable them to increase efficiency and productivity, but also to reduce costs," he added.

Leif Darner, general manager of the Marine & Protective Coatings business unit, said "The existence of a worldwide network of integrated, first class laboratories capable of developing and testing products to the highest international standards is central to our ability to respond quickly to the constantly changes. 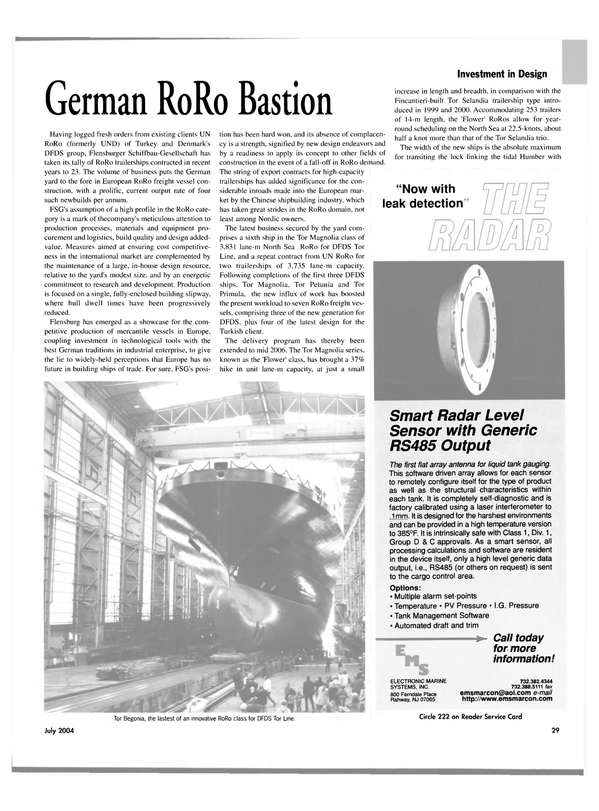