When Cianbro Corporation approached Petrodrill, an international rig-owning company with Brazilian and American shareholders, about completing two partially- built oil rigs in 2002. some thought Cianbro President and CEO Peter Vigue was out of his mind.

"What they didn't understand is that Cianbro has a secret:our people," said Vigue. "Our people were ready, willing, and able to take on this challenge. And.

with two completed rigs to their credit, they were right." The Maine firm had no experience or track record in oil rig construction when Vigue sought out the Petrodrill project. One of the East Coast's largest construction companies, Cianbro was best known for large civil and heavy industrial projects. Two of the company's most recent major projects before taking on the rigs included North America's largest cement plant in northern Maryland and the eastern seaboard's heaviest lift span bridge in New Haven, Conn.

Vigue holds an engineering degree from Maine Maritime Academy, but he wasn't necessarily looking to branch the 2,200-member, employee-owned company out into shipbuilding. What he was looking for was a project that would permit many of the 1,200 workers based in Maine to work there instead of traveling to project sites out of state. What he found was a pair of incomplete oil exploration rigs, orphaned by the bankruptcy of their original contractor.

Vigue realized that the part of the project least familiar to Cianbro's people had already been done. The structural components of the two rigs already existed.

What was more, ships are mobile. Within limits, they can go to where the workers are, rather than the other way around. To Vigue, it was a perfect fit. He just had to persuade the rigs' owners that Cianbro was the right company for the job.

That reportedly wasn't easy, but in the end Petrodrill took a chance on the Maine-based company. Banking on the workforce flexibility, Cianbro put together a plan that enabled their workers to switch from mill construction to shipfitting without missing a beat.

"Cianbro has decades of experience in pulp and paper mills and other manufacturing facilities," said Alan Burton, Cianbro's director of safety and human resources. "The skills our people use every day such as welding, pipefitting, cabling, and more were exactly what we needed to complete the rigs." Before striking any shipfitting deals.

Cianbro had to have a place to work on them. The company leased what would become Portland Ocean Terminal, a vacant repair facility in Portland, Maine, to serve as its shipyard for this unconventional project. The facility, which once housed a dry dock, was uniquely qualified by its deepwater basin-a rare find on the East Coast and an important key to securing this project. To prepare the site, the company performed extensive renovations, including a rebuild of a 140.000-sq.-ft. warehouse with 87,000 sq. ft. of office space on the second floor.

The city of Portland benefits from the arrangement too. In addition to the million dollars a year they received for leasing the terminal to Cianbro and the improvements the company made to the facilities, Portland has used the project as the centerpiece of an effort to revitalize the shipyard component of its working waterfront. An active commercial shipyard is an important asset to any maritime community, and Cianbro's has provided hundreds of jobs beyond the company's own crews.

"Cianbro has helped lay the foundation for future marine industrial projects at this facility," said Jeffery Monroe, director of ports and transportation for the city of Portland. "We believed in Cianbro's ability and have worked in partnership with them. These rigs represent possibilities for future projects." After the work site was prepared, the real fun began. The incomplete rigs, each still in two components — a set of pontoons with columns and a matching deck box — were towed and barged to Portland from their original construction sites on the Gulf of Mexico. Once there, the football-field-sized deck boxes had to be joined to the rigs' immense pontoon structures in a delicate operation called a floatover.

Ductwork, bulkheads, insulation, millions of feet of wire and pipe-all the millions of things, big and small, that makes a ship a ship rather than just a big chunk of hollow steel-had to be fitted and installed. At the project's peak, more than a thousand people were working on the two, giant, 12,000-ton platforms.

All told, about 850 Cianbro workers were employed on the project, with the balance of the workforce made up of workers for various subcontractors.

Less than two years after arriving in Portland in pieces. Cianbro handed over the second completed rig to Petrodrill.

Dave Leavitt, Cianbro's senior project manager, said, "These have been a very interesting and exciting two years for Cianbro. Our company has taken on and met significant challenges over our 55-year history. And, working with Petrodrill, we are extremely proud of the successful completion of these rigs — a brand new market for Cianbro." The first of the two rigs, named Pride Rio de Janeiro, left port in February 2004, embarking on a 20-day trip to Curacaco for sea trials. The second.

Pride Portland, completed sea trials off the Maine coast in mid-May. Both rigs are built for warm water exploration and the rigs' owners hope to obtain contracts to use at least one of the rigs off the east coast of South America. Housing crews of more than a hundred people each, two sister rigs, built in Korea by Daewoo, are already on the job.

Derek Leach, project director for Petrodrill, said. "It is noteworthy that Cianbro's first oil rig construction project was anything but easy, however, their team managed to rise to the challenge and helped bring this complex project to conclusion while achieving a high standard of safety and quality. It is fair to state that despite all the obstacles that had to be overcome the two rigs as delivered have achieved a standard every bit as good as that attained by the two sister vessels." As for Cianbro, Vigue is already looking for the next big project for his company to tackle with its maritime credentials.

He has his eye on something the person on the street would much more readily recognize as a ship — the SS United States.

By Benjamin D. Hutchins (All Photos by James Moscone) 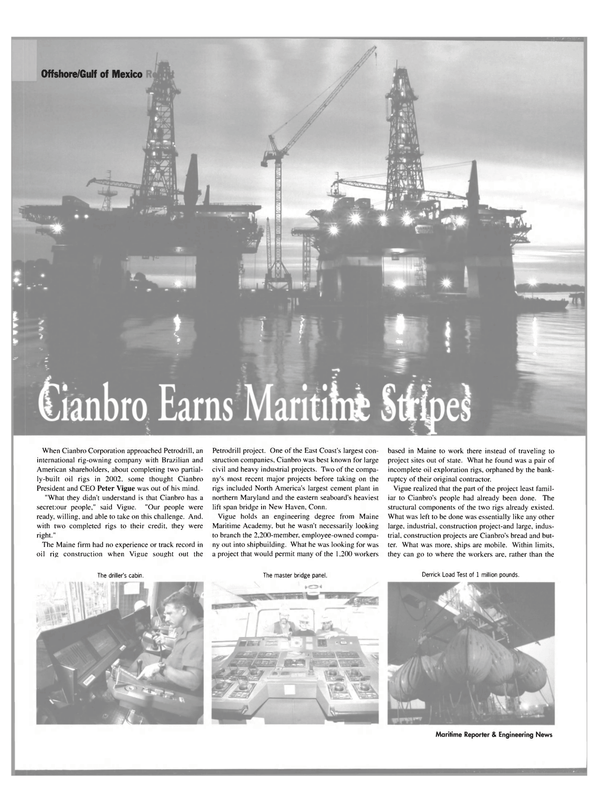