The new Austal Auto Express 58 catamaran Lake Express entered service on June 1. Operating between Milwaukee, Wis., and Muskegon. Mich.. Lake Express provides a crossing time of 2.5 hours, slicing in half the time it would take to drive around the southern tip of the lake, through a congested Chicago.

Launched on March 20, Lake Express is the seventh vessel launched at Austal's U.S. shipyard and is the largest built at that facility to date.

The vehicle deck can carry 46 cars.

Catering for the size of cars found on roads today, the vehicle lanes are larger than normal with bay sizes of 17.7 ft..

The inner two lanes offer a clear height of 9.5 ft. while the outer lanes are 8.5 ft.

which is sufficient for service speeds of 34 knots at 90% Maximum Continuous Rating. "Speed trials showed Lake Express reached a maximum of 39 knots," said Randy Naker, of Hornblower Marine Services, which is managing the vessel's operation for Lake Express. "Thanks to the motion control system the ride was very comfortable" he said. In this application, the state-ofthe- art motion control system uses hydraulically actuated interceptors fitted aft to provide motion damping as well as control of running trim. The interceptors are controlled by commands from a central unit which receives motion data from an array of onboard sensors, computes the required damping forces, and then issues the command signals. 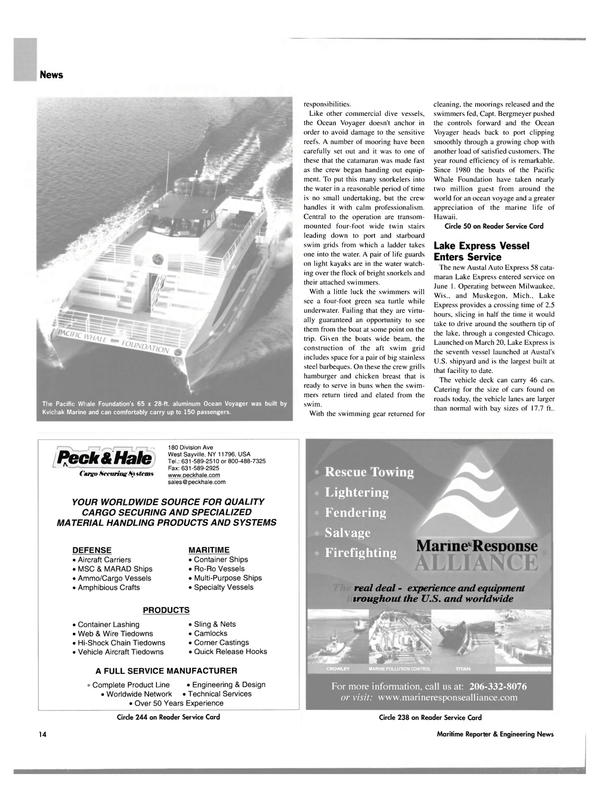