Keeping our woters safe, secure and open for business As new international and domestic regulations regarding shipping security enter force, the focus is not simply on security, but also on maintaining a healthy flow of commerce to keep the U.S. and world economy humming.

U.S. Homeland Security Secretary Tom Ridge recently announced the implementation of new security measures designed to build upon the layers of security that are already in place at the nation's ports. The new measures, required by the Maritime Transportation Security Act, add additional security protections to every port in the United States. Port and vessel protection continues to remain one of the Department of Homeland Security's highest priorities.

The oceans and ports of the world are vital to the economic livelihood of the United States and countries throughout the world.

Consider: • Over 9 5 percent of the nation's overseas cargo moves through U.S. ports.

• Over 3 1 8 billion gallons of petroleum products are shipped in vessels on U.S. waterways in a year.

New Security Measures In addition to the international requirements of the International Ship and Port Security Code, the U.S. has required vessels and port facilities around the country to take additional security measures by July 1, as part of the domestic Maritime Transportation Security Act which establishes a new, robust baseline of security for our nation's ports. Ports around the country are now on target to meet the July 1 deadline to implement additional port security measures.

Security Assessments and Plans: Port facilities and vessels across the nation were required to submit a security assessment and a security plan to the United States Coast Guard, now part of the Department of Homeland Security. T h e submitted security assessments identified the aspects of each port facility and vessel that were deemed security vulnerabilities. The accompanying security plan outlined specific measures that would be taken by each port to address those vulnerabilities. Some 9500 vessels and 3500 facilities submitted both a security assessment and a security plan earlier this year. In addition, the Coast Guard, examined the vulnerabilities of the port complexes as a whole and, working in conjunction with the local stakeholders, developed security plans that detail how the combined resources of an area will be used to deter, prevent and respond to terror threats. 1 he Coast Guard analyzed each plan to ensure that it sufficiently and consistently addressed the security needs of the individual facility, port and vessel.

Implementation: The Coast Guard is overseeing the ongoing implementation of these security measures across the country. Each plan is different and uniquely tailored to the individual port, facility and vessel. Some of the specific security measures currently being implemented include increased identification checks on crew members and visitors to the ports; additional canine detection teams; expanded baggage and passenger screening efforts; strategically placed perimeter fencing equipped with newly installed surveillance cameras; targeted restricted access to sensitive areas of the port; x-ray machines on all large cruise ships; additional employee training procedures: increased security patrols; and implementation of a robust certification program to ensure foreign flagged vessels docking in U.S. ports have met the international security requirements, which the United States originally proposed to the international community in November 2001.

C o n t i n u e d Improvement: The U.S Coast Guard will conduct assessments of the nation's ports to determine which vulnerabilities still exists and where. These assessments consist of teams of analysts who craft possible terrorist plots against specific targets and then analyze how such targets would fare under those circumstances.

Additional training and port security related exercises will also be part of ongoing port security effort. The U.S. Coast Guard has also implemented a verification program to ensure that all ports and vessels maintain their security measures. An Overview of Our Strategy Layers of Security Systems: By taking a layered approach to security, the D H S has utilized the expertise of its bureaus - the U.S.

Coast Guard and Customs and Border Protection - the private sector and state and local authorities, to create a system of different security measures that ensure there are protective measures in place f r om one end of a sea based journey to the other. T h e layered security measures are designed to protect the three phases of the journey: overseas, in transit, and on U.S. shores.

Joint Effort. Securing our ports and waterways is a team effort - everyone, from local governments and private citizens to the international community play an important role in ensuring that our waterways remain open for business. The U.S. government does not have the resources to secure the ports and waterways alone. D H S must coordinate its efforts with the nation's trading partners, enlist the expertise of maritime industry and local government agencies, and use the eyes and ears of our citizens, who are the true regional experts, to notice when something is amiss. T h e goal is to find the appropriate balance between security and freedom - between inspecting every container and keeping trade moving - that is the measure of success. 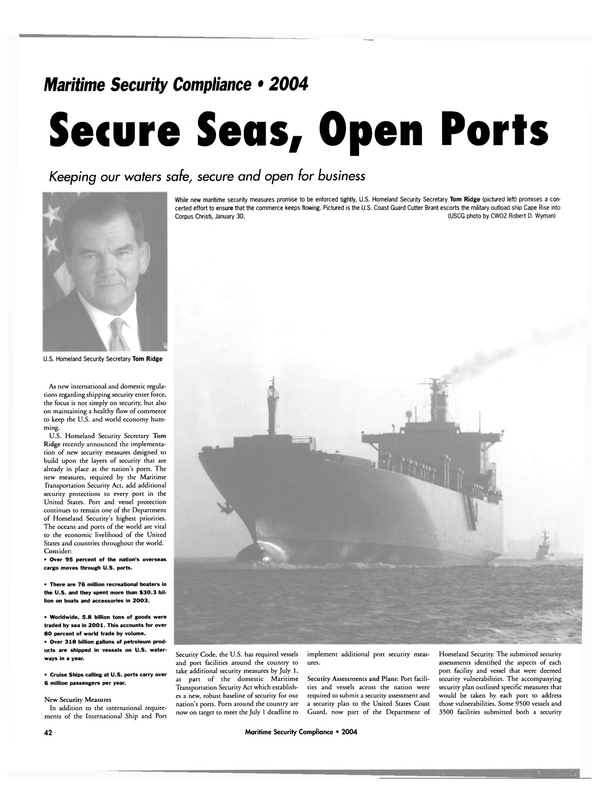