Hawaiian maritime tradition traces its roots to the huge ocean going outrigger canoes that took sophisticated navigators island hopping around the expanse of the Pacific Ocean. Today fiberglass versions of these canoes are put through their paces by canoe racing clubs. Other reincarnations of the outrigger's twin hulls are the many catamarans, both sail and power, that take thousands of tourists out into the island waters every day of the year. The Pacific Whale Foundation's Ocean Voyager well represents this modern class of vessel.

Designed by the noted Australian firm Crowther Multi-Hulls and built by Kvichak Marine Industries in Seattle, the 65 x 28-ft. aluminum boat comfortably carries up to 150 passengers out from the island of Maui on whale watch and 130 for snorkeling tours. A much favored destination is the tiny island of Molokini. Formed by the lip of an ancient partially sunken volcanic crater just off the coast of Maui. Within its Ushape, is a thriving coral reef ecosystem.

Boats can enter Molokini crater and moor inside. The coral reefs inside the cone attract as many as 2,000 snorkelers per day.

Departing Ma'alaea Harbor on Maui, on a recent trip in early May, the twin hulls of the Ocean Voyager rose on a two to three foot swell brought on by morning's stiff trade winds. The hundred plus passengers hardly noticed the vessel's motion as Capt. Erik Bergmeyer brought the Voyager's twin 700 hp Cummins KTA19 M3 main engines up to an 1,800 rpm cruising speed. The engines turn a pair of five-blade 32 x 36- in. props through ZF IRM350 marine gears. With the GPS showing 18.5 knots the choppy miles washed quickly aft and the rocky outcrop of the crater grew.

Demonstrating the boat's potential, Bergmeyer pushed the twin control levers all the way forward and the tachometers climbed past 1,950 rpm and the GPS showed over 22 knots of speed.

Coming up to the weathered rock outcrop of Molokini the captain circled to check the boats moored inside the ancient crater. Bergmeyer, who spends his off duty hours surfing, decided that the chop on the blue waters was a little to much to be safe for his load of snorkelers. But this is an area of many coral reefs and he turned the boat's twin bows toward a point in the lee of Maui noted for green sea turtles. The arrangement of the twin deck vessel is such that three tiers of seats face forward over the broad bows giving excellent "wind in your face" views to passengers. Others lounge around the upper deck and still more find comfort in the enclosed seating area where the food services are located. While one of the boat's naturalists explained what the swimmers might see and gave a brief explanation of snorkeling to the uninitiated, the crew checked the preparation of 130 sets of masks, snorkels and fins. Because this is primarily an environmental organization, the five member boat crew includes four naturalists who have extensive experience or degrees in biological sciences.

Like other commercial dive vessels, the Ocean Voyager doesn't anchor in order to avoid damage to the sensitive reefs. A number of mooring have been carefully set out and it was to one of these that the catamaran was made fast as the crew began handing out equipment.

To put this many snorkelers into the water in a reasonable period of time is no small undertaking, but the crew handles it with calm professionalism.

Central to the operation are transommounted four-foot wide twin stairs leading down to port and starboard swim grids from which a ladder takes one into the water. A pair of life guards on light kayaks are in the water watching over the flock of bright snorkels and their attached swimmers.

With a little luck the swimmers will see a four-foot green sea turtle while underwater. Failing that they are virtually guaranteed an opportunity to see them from the boat at some point on the trip. Given the boats wide beam, the construction of the aft swim grid includes space for a pair of big stainless steel barbeques. On these the crew grills hamburger and chicken breast that is ready to serve in buns when the swimmers return tired and elated from the swim.

With the swimming gear returned for cleaning, the moorings released and the swimmers fed, Capt. Bergmeyer pushed the controls forward and the Ocean Voyager heads back to port clipping smoothly through a growing chop with another load of satisfied customers. The year round efficiency of is remarkable.

Since 1980 the boats of the Pacific Whale Foundation have taken nearly two million guest from around the world for an ocean voyage and a greater appreciation of the marine life of Hawaii. 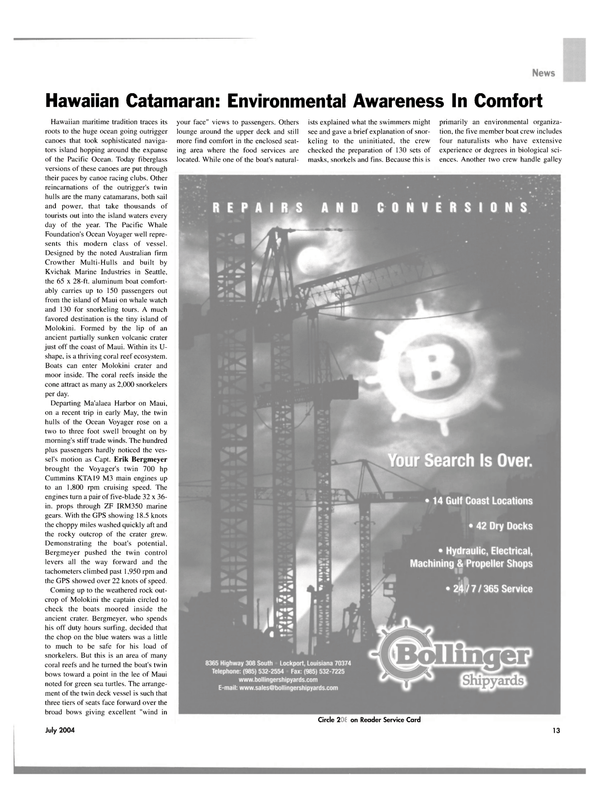