Will Congress Pass Any Maritime Legislation in 2014?

Following its usual summer break over August 2014, Congress came back from its five-week summer recess and spent a whopping eight days or so back in session before recessing once again, approximately a week early, to hit the campaign trail for the November elections.  This essentially means that including the summer recess, Congress will have been in session for a total of about eight days between the end of July and the middle of November 2014. No wonder why Congress has not been able to accomplish much this year, to date.
As a result, there are a number of maritime-related bills left hanging for consideration should a lame duck session (scheduled to begin the day after Veterans Day, November 12, 2014) actually decide to move legislation this year. Any legislation not enacted by the end of this year will have to be reintroduced in the next Congress, the 114th Congress, which begins in January 2015. That is because each Congress lasts two years, and legislation not enacted by the end of the second year of a Congress dies. The following is a discussion of the situation.

Keeping the Government Funded
A Continuing Resolution (CR) will keep the U.S. government open and funded through December 11, 2014, after Congress returns from the mid-term elections. The CR includes a three percent across-the-board cut in all discretionary spending. The CR also includes authorization for the President to support Syrian rebels with air strikes aimed at the Islamic State of Iraq and the Levant (ISIL). Of course it is impossible to predict whether Senate Leadership will change hands as a result of the elections; if it does, however, the CR is likely to be extended into next year, leaving specific budget decisions with a new Congress.

The Coast Guard Authorization Bill
As is typical, the House passed its version of the Coast Guard Authorization bill earlier in the year on April 1, 2014 (H.R. 4005). The Committee on Commerce, Science, and Transportation introduced its version, S. 2444, on June 5, 2014. Despite repeated attempts by this Committee to move S. 2444, however, no other action was taken on the bill prior to the latest recess because of Senate Commerce Committee Chairman Jay Rockefeller’s desire to incorporate language to increase federal oversight of cruise passenger protections against the vehement objections of the cruise industry. The following is a discussion of some of the key provisions in the two versions of the Coast Guard Authorization Act.
The House bill would extend assistance to small shipyards through 2016; allow third-party classification societies to issue certificates of inspection, or any other certificates issued by the Coast Guard, to offshore supply vessels; mandate that vessels built to operate in cold waters be equipped with survival craft to ensure that no part of an individual is immersed in water; require that 75 percent of food aid cargo must be carried on vessels owned by U.S. citizens, thereby restoring the cut that took place in last year’s Defense Authorization bill; and would require a report on the effect liquid natural gas exports would have on U.S. job creation.
The Senate bill would mandate the Coast Guard to publish a final rule on Automatic Identification Systems (AIS), which would have to be consistent with existing statutory provisions on vessel operations, and create a permitting process to allow a vessel traffic information service to use AIS to transmit navigation and safety information to vessels; mandate the federal government to provide notice of marine casualties to state and tribal government officials; create a fund to ensure the protection and fair treatment of seafarers during investigations; mandate the Coast Guard to publish all written incident plans within 12 hours of an oil spill; and require vessel response plans for Mobile Offshore Drilling Units to incorporate information for a planned response to a worst-case discharge from its response plan.
One key topic addressed by both bills is the treatment of foreign seafarers that have been abandoned in the U.S. or are required to remain in the U.S. to appear as witnesses at Coast Guard or other criminal enforcement proceedings. The Coast Guard has been advocating for this legislation for some time and it is now included in both versions of the bill. The concept is to provide, through a system of payments paid into a new Abandoned Seafarers’ Fund established in the Treasury, for the care of seafarers who have been abandoned in the U.S. by their ship owners and operators, or who have to remain in the U.S. as witnesses to potential federal crimes. The Fund is funded in the House bill by penalties assessed against ship owners for violations of the Act to Prevent Pollution from Ships. The Senate bill has a broader payment scheme but, in contrast to the House bill, allows for the provision of a bond or surety by a vessel owner in lieu of detaining a vessel in port.

Key Hearings on the Arctic and the Merchant Marine
The House Coast Guard and Maritime Transportation Subcommittee held hearings on the Arctic and the State of the Merchant Marine on July 23, 2014, and September 10, 2014, respectively. The focus of the Arctic hearing was on the Coast Guard’s role in implementing the National Strategy for the Arctic Region and whether other agencies would contribute to the cost of a new polar icebreaker. It is highly unlikely other agencies would assist in such funding and this topic remains controversial particularly in view of the world focus on marine transportation in the Arctic and the role the U.S. will play in this region.
With regard to the merchant marine hearing, much of the focus was on the impact of food aid and other cargo cuts on the U.S. flag-fleet. The hearing also discussed legislation introduced by Chairman Duncan Hunter and Ranking Member Garamendi, which would require that liquefied natural gas exports be shipped on ships built in the U.S. Chairman Hunter stated at the hearing on the merchant marine that he would ask the Maritime Administrator to appear before the Subcommittee after the Maritime Administration releases its long-awaited maritime strategy. The strategy is scheduled to be released sometime this year for public comment.

The Maritime Security Program
Funding for the MSP continues to be controversial and is having a major impact on U.S.-flag carriers.  The Administration requested $186 million to fully fund MSP in FY2015. Although the Senate Transportation/Housing and Urban Development (THUD) Appropriations Bill provided the full amount requested for MSP, the House THUD Appropriations bill contains only $166 million for the program.  The House and Senate Appropriations Committees have not yet settled on the level of funding for MSP or worked out a final version of the FY2015 THUD bill.
The issue of MSP funding was also raised during the House Coast Guard Subcommittee hearing, mentioned above. Two witnesses, one representing a MSP carrier and the other a U.S. maritime labor organization, urged for an increase in the per vessel support levels currently authorized for ships in the MSP. The witnesses cited declining Department of Defense (“DOD”) and non-DOD government cargoes, and a need to achieve a more level playing field and commercial viability for MSP vessels when competing against foreign-flag vessels, as justification for the MSP per vessel stipend increase.

The TIGER
The Transportation Investment Generating Economic Recovery, or TIGER Discretionary Grant program, provides a unique opportunity for the U.S. Department of Transportation (“DOT”) to invest in road, rail, transit, and port projects that promise to achieve critical national objectives. Over the years, Congress has dedicated millions of dollars for TIGER Grants to fund projects that have a significant impact on the nation, a region, or a metropolitan area. While the outcome of the FY2015 budget is unclear, agencies are continuing to spend FY2014 dollars.  For example, DOT just announced the award of 72 TIGER grants in 46 states and the District of Columbia. The awards for intermodal projects of national and regional significance included a number of port-related projects, including $20 million for a modernization project at the Port of Seattle, $15 million for a new international terminal at the Virginia Port Authority, and $10.84 million for the rehabilitation of a terminal in Charleston, South Carolina. Looking ahead to 2015, there is a major discrepancy in the budget for this very popular infrastructure grant program between the House ($100 million) and the Senate ($600 million) bills, which will have to be resolved in any final FY2015 spending bill.

Conclusion
In conclusion, it has been a very disappointing year-to-date, to say the least, with regard to Congressional action in many areas, including the maritime sector.  In addition, many of the key members of Congress in the maritime sector face tough elections. Even if these members win their elections, it is entirely unclear what action Congress will take when it returns following the elections and which party controls the Senate. As to the Coast Guard Authorization Bill, which has many of the key legislative provisions our industry is following, if the cruise industry continues to oppose cruise passenger protection provisions, it seems likely that the bill will not move this year even if the key leaders of the Senate want to push it. There is a good chance we will be stating the oft-used phrase, “Let’s try again next year.”

Jonathan K. Waldron, partner at Blank Rome, concentrates his practice in maritime, international, and environmental law, including maritime security. Mr. Waldron served in the U.S. Coast Guard for 20 years, and is recognized as a leader in shipping law. Mr. Waldron may be reached at
t: 202.772.5964
e: [email protected] 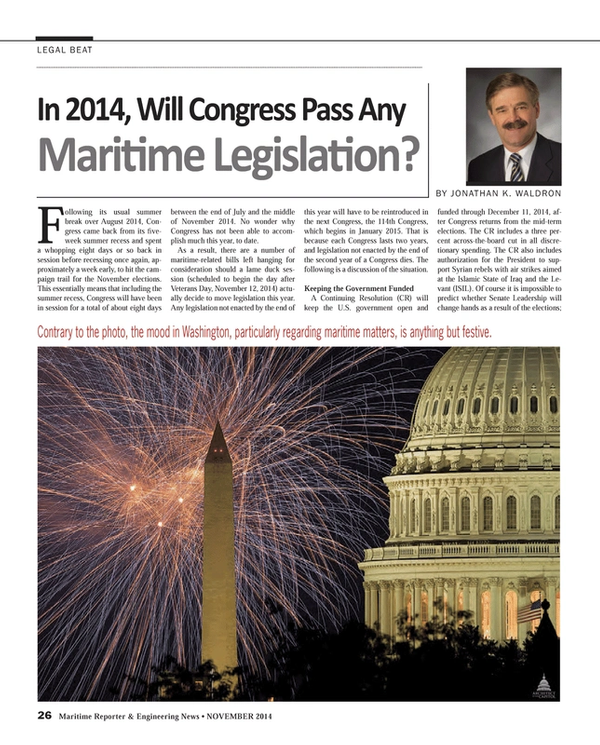 Read Will Congress Pass Any Maritime Legislation in 2014? in Pdf, Flash or Html5 edition of November 2014 Maritime Reporter