Is Glycerine the Next Marine Fuel?

Following a year described as “intense activity,” the Glycerine Fuel for Marine Sustainability project (GLEAMS) concluded that Glycerine is a viable, exceptionally clean alternative marine fuel.
The GLEAMS project claims that it has been particularly successful in dispelling the notion that glycerine is unsuitable for use as a fuel due to its physical and chemical properties, as it demonstrated that glycerine could be used as a fuel in compression ignition engines by displaying the glycerine powered GLEAMS emissions test engine at Seawork International 2014. While the use of glycerine has been studied and documented, the GLEAMS team realizes the importance of real-world operation, and the partners committed to an outline plan for its commercial realization, which includes pilot operational usage. The project partners are currently exploring early potential adopters for the technology including wind farm support vessels, research and education vessels, military specialist craft and superyachts. In addition a potential market for ‘cold-ironing’ (shore power) has been recommended by the project as a special case where subsidies could be available in the UK.
Glycerine is currently produced as a by-product of the bio-diesel industry and is in surplus supply.  However, the available quantities are insufficient to power the world’s deep-sea shipping fleets but could support a range of smaller vessel types and shore applications. There is potential for a massive increase in glycerine supply from other organic renewable means such as salt-stressed algae.
http://groupspaces.com/GLEAMSInterestGroup/join/ 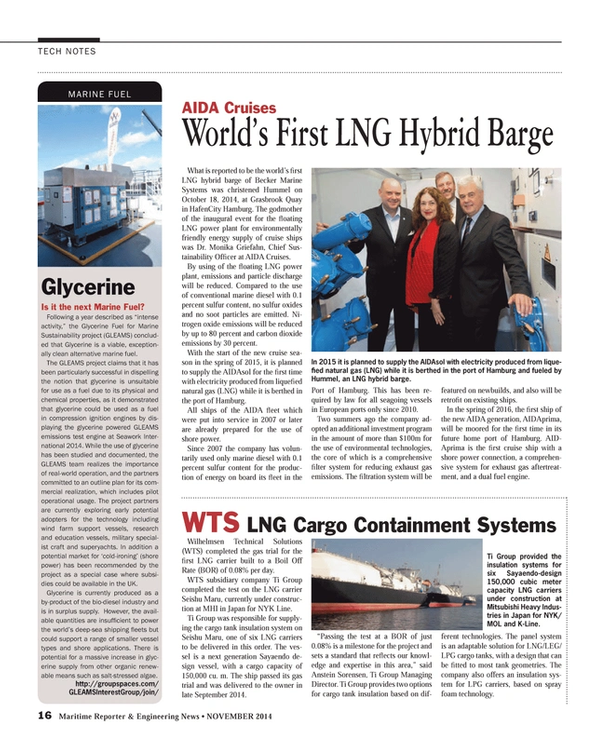 Read Is Glycerine the Next Marine Fuel? in Pdf, Flash or Html5 edition of November 2014 Maritime Reporter