MARIN was delighted to take part in a truly historic milestone in the industry when Daewoo Shipbuilding and Marine Engineering (DSME) asked MARIN to investigate the seakeeping ability of what would become the largest container vessel in the world - Maersk Line’s Triple-E.
MARIN carried out an extensive scope of work, combining numerical predictions and basin model tests to provide the most complete qualification of the vessel’s behavior in various sea conditions. An important yet unfortunately, too rare, feature of this project was that MARIN could count not only on the support of the shipyard but also on that of the future owner. Maersk Line and Maersk Maritime Technology took an active role in the preparations of the different activities, showing clearly its intention to be involved in all parts of the development of its future Triple-E Class. Direct communication lines with the owner were without doubt key to the project’s success, since it was possible to account for the owner’s wishes right from the project kick-off.

Close Cooperation
Operational information provided by the owner could then be used as input for the preliminary numerical work, as well as for the basin model tests. Using MARIN’s in-house strip theory code SHIPMO, a preliminary estimate of the ship motions and accelerations at crucial locations could be achieved for a large number of conditions in a short time. Calculations were also conducted for several conditions with the in-house 3D panel code FATIMA in order to obtain an initial impression of the wave-induced added resistance.
Following the calculations, model tests were carried out in the Seakeeping and Maneuvering Basin. The basin is 170 m long, 40 m wide and 5 m deep. The model tests were performed using a free-sailing, self-propelled scaled model of the container vessel. It is worth noting that the only connections between the model and the carriage consisted of free-hanging wires for measurement and power relay. These did not restrict the model motions in any way.

Roll Behavior
The first series of tests was dedicated to an extended characterization of the rolling behavior of the vessel in the most unfavorable wave conditions. Given the relatively long natural roll periods associated with most of the installed loading conditions in comparison with the range of wave periods, the most unfavourable wave conditions with respect to roll were observed in long waves originating from the stern quarter. The test series also included specific tests to assess the risk of parametric roll. Besides the roll motion, attention was given to the transverse and vertical accelerations generated by the ship motions (mainly roll) at the bridge or on the container lashing system.
The second test series provided a detailed assessment of the vessel’s operational performance for several sailing scenarios. The investigation encompassed the quantification of ship motions and associated accelerations, the risk of green water at the bow, slamming at the bow-flare and stern and added resistance due to wind and waves. During the tests a wide array of wave conditions was considered, ranging from normal storm conditions to hurricane-like conditions. The resulting estimates of the risk of green water at the bow and slamming allowed MARIN to validate certain design choices, such as the breakwater or bow-flare angle. Additionally, the measurements of the thrust and torque delivered by the propeller yielded a good estimate of the wave induced added resistance and associated speed loss. It is also worth mentioning that this project thrust MARIN into the spotlight when rather unusually, Maersk Line requested that a film crew were present during the tests. This documentary, “Maersk Line’s Triple-E – the World’s Largest Ship,” is currently on air on the Discovery Channel and is definitely worth a look. 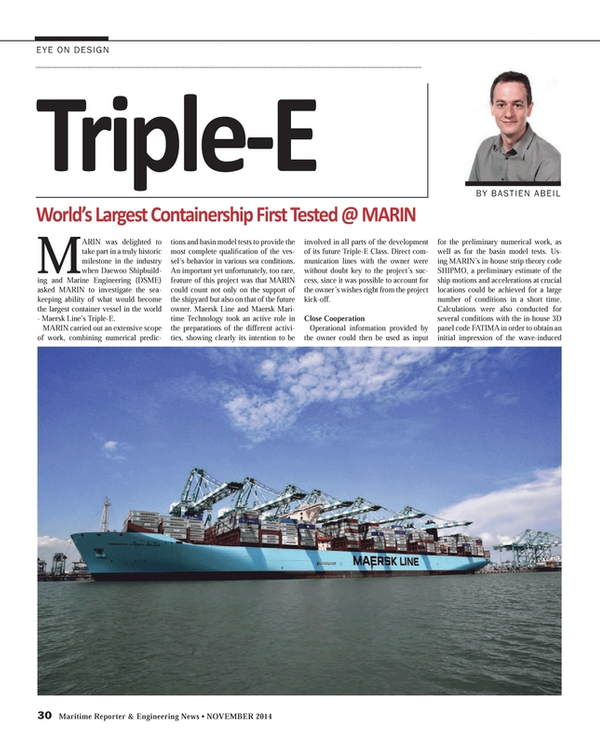