It is not often that I break out the tux for my editorial picture, but this special edition dictates. I know that I should argue that all of our editions are special, but this one in particular, I must admit, stands out in a number of ways.
In fact, all of 2014 has been somewhat ‘special,’ as the domestic maritime business has rebounded with a vigor, driven in no small part by an unprecedented energy boom in the U.S. that looks like it will make the country energy independent by 2020. Political gamesmanship and manipulation of energy pricing by OPEC aside, the development of the new energy business in the U.S. and the resulting impact on the maritime markets, domestic and foreign, are real, deep and significant for a generation to come. The year 2014 is also, if you haven’t figured out by now, the 75th anniversary of Maritime Reporter & Engineering News, the flagship title of our fast expanding media group. While 75 is impressive, McAllister Towing’s celebration of its 150th anniversary is a step beyond.
To write this story there was no one better than Patricia Keefe, who has written our centerpiece 75th anniversary story each edition this year, and will continue in our pages in 2015 and beyond. No one I have ever worked with digs into a story with the journalistic zeal of Tish, and when you step back and look at McAllister Towing, there is plenty of meat on that story bone.
McAllister Towing is personal for me because I have known Brian McAllister (as many of you have, too) for almost all of my 20+ years in this post, and the ties between the McAllister’s and the O’Malley’s extends decades beyond my tenure.  McAllister Towing is personal because it is New York City based, a few subway stops from our office; a ubiquitous presence in and around the New York waterways. But the McAllister Towing story is far more than a feel-good New York piece, as the story is about success and strife; it’s about opportunity and investment; it’s about strong personalities, strange tales and multiple generations, particularly now as the fifth generation takes the wheel. In short, McAllister Towing is quintessential maritime. 2014 has been a strong investment year for the company, adding three ultra-modern Z-Drive tugs to its fleet, including the Eric McAllister featured on the cover. Turn to page 76 of this edition for our 10-page feature of one of the stronger names in U.S. maritime circles.
Another interesting piece that ties this edition together nice is Dennis Bryant’s “Avoiding the Edges of the Sea” on page 22. In usual Dennis Bryant fashion he delivers a strong message on a burning topic in a fast and enjoyable read. His piece this month addresses how technology has (and still does) instill a false sense of complacency among mariners. I found this particularly interesting as on a recent travel swing I have checked in at four separate providers of maritime simulation services, and to put it mildly, there is a strong surge of investment in this area. Last month I ventured out to the inauguration of the Bouchard Tug and Barge Simulation Center at SUNY Maritime, and on the side Morton S. Bouchard III summed it up nicely: “You cannot be profitable in this industry unless you are safe. You cannot be safe unless you train.” 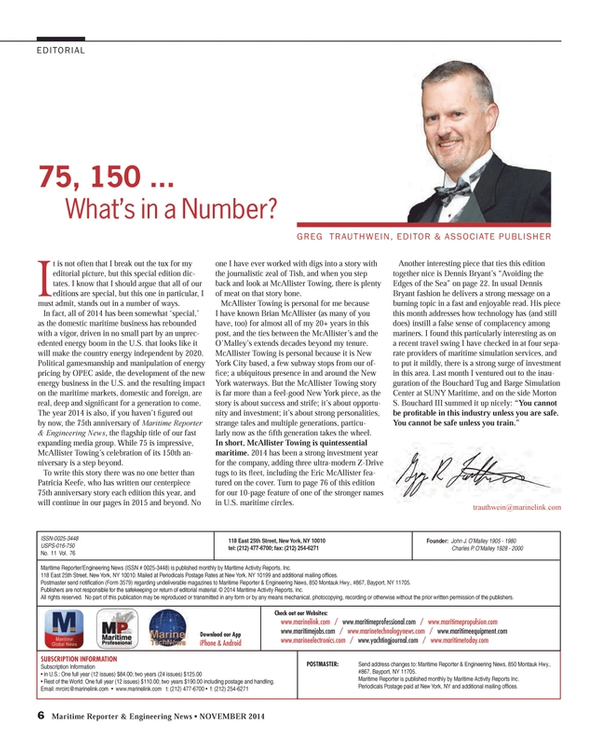