What’s All the Noise at IMO?

Shipping may think they hear the sound of new regulations as they are slammed onto their desks.  What is all the noise concerning noise at IMO?  This may very well be the question from ship owners, operators and builders closely following activities at the International Maritime Organization (IMO).  In 2013, IMO issued mandatory regulations for shipboard airborne noise and earlier this year IMO internal committees approved new draft guidelines for minimizing underwater noise.  Even though the author advised the U.S. delegation on both matters, these two codes are not related as they were shaped at IMO.  Here is the author’s view what the new regulations/guidelines will mean to the marine community.
Airborne Noise
Since 1981, the IMO has established a guideline for shipboard airborne noise (IMO Resolution A468XII-1981).  This guideline included information on sound measurement, acoustic insulation, hearing protection and maximum recommended sound pressure levels by ship compartment type.  As noted in the resolution, its purpose was to reduce mariner exposure from noise in order to provide a safe working environment (i.e. ability to hear audible alarms), reduce noise-induced hearing loss (NIHL) and provide an acceptable degree of comfort for the passengers and crew on the ship.  Many vessels were designed and built to these guidelines enforced only through the contract between the ship owner and the shipbuilder.
In July 2007, all of the European Union (EU) member states and the European Commission (EC) collectively made the proposal to update the 1981 guidelines with the goal making them mandatory.  This occurred under the framework of the 83rd Session of the Maritime Safety Committee (MSC) at the IMO headquarters in London.  The reason for making the current IMO guide mandatory was to address a gap in the Safety of Life at Sea (SOLAS) Regulation II-1/36 which “requires that measures be taken to reduce noise in machinery spaces to acceptable levels.”  As noted in the meeting minutes, “the SOLAS Regulation did not define “acceptable levels,” but only provided a reference to the old IMO guideline, A.468.”  The MSC “work program” was approved and A.468 was given to the Subcommittee on Ship Design & Equipment (DE) Committee of IMO for the detailed review and revision.  The work of revising the noise code started at the 53rd DE meeting and progressed through the 56th DE meeting concluding in February 2012.  Final approval was granted at 91st meeting of the MSC in November 2012.
This new SOLAS regulation (Chapter II-1/3-12; “Protection against noise” & “Code on noise levels on board ships”) requires applicable vessels to be constructed in such a manner that certain types of compartments will have noise levels no higher than specified in the Code.  The new Code has mandatory and recommended sections, but the majority of the regulation is required.  The Code is only mandatory for ships that are 1,600 gross tons (GT) or larger and for which the building contract was placed on or after July 1, 2014.  The new code will not be applicable to numerous types of vessels such as: dynamically supported craft, high-speed craft, fishing vessels, pipe-laying barges, crane barges, mobile offshore drilling units, pleasure yachts not engaged in trade, naval ships, troopships, ships not propelled by mechanical means, pile driving vessels and dredgers.
An abbreviated list of the noise level limits is given in Table 1 along with the limits which were part of the old A468 code.  For the most part, not much has changed from the old to the new noise limits.  The only change from the old to the new (1,600 to 10,000 GT) is a decrease for non-specified work spaces.  The limit used to be 90 dB(A) and it was reduced to 85 dB(A).  The new code further divided the noise limits between less than 10,000 gross tons and greater than 10,000 gross tons.  Also in the new Code a couple of room types had 5 dB lower limits for ships that were 10,000 gross tons or larger.  The lower limit was put in place due to fact that it is easier to achieve lower limits on physically larger ships.
As it was mentioned above, the author was a participant in the later stages of the new code as part of the United States delegation led by the U.S. Coast Guard (USCG) and their key staff Lieutenant (LT) Nick Woessner and Mr. Wayne Lundy.  One need not be apprehensive of the noise limits specified in the new IMO code for ships of 1600 GT and up.  These compartment noise limits can be achieved with what have become standard noise control treatments which can be designed into the ship for only a very small percent increase in the total ship acquisition cost.  The key to meeting any shipboard noise requirement is to make sure the noise requirements are part of the design process when the ship is built and a good way to make sure the noise limits are achieved is to require a noise evaluation before construction starts.  The author’s firm has found that dealing with noise requirements after construction can increase the cost by a factor of ten to twenty.
Shipping appears to have received the new noise regulation positively, at least according to Kathy Metcalf the Director of Maritime Affairs at the Chamber of Shipping of America (CSA).  She stated that, “The industry has been aware of the process during the development of the airborne noise regulations.  The industry in general saw these developments as necessary since they related to the health of the crew on board the vessel and were generally supportive of these developments as they apply to new vessels.  Industry concerns related to how or if it would be possible to comply with the requirements for existing ships…is still ongoing.”

Underwater Noise
Just a little after IMO decided to update “Code on Noise Levels On Board Ships,” a proposal was presented by the United States to address noise below the waterline.  The lead on this action was taken by U.S. National Oceanic and Atmospheric Administration (NOAA).  Dr. Trisha Bergmann was the lead NOAA scientist for the issue, but early work was started by Ms. Lindy Johnson, a NOAA attorney along with others.  The proposed guide was developed mostly by correspondence with most of the facilitating performed by both LT Woessner and LCDR Catherine Phillips both of the USCG. The Coast Guard is the administrative lead as they are the head of the U.S. delegation to the IMO.  There was vigorous non-governmental organization (NGO) and international participation in the development of the guide especially from the EU nations.
The motivation for introducing the topic of mitigation of underwater noise was the hallmark 2008 conference held in Hamburg.  It was sponsored by the Darmstadt, Germany-based Okeanos Foundation for the Sea and brought together experts in mitigation, measurement and effect of anthropogenic (man-made) noise on marine animals and fish.  The final report from the Okeanos conference called for a reduction of unintentional ship noise of 3 dB over the next ten years and 10 dB over the next 30 years.
The underwater noise guidelines are not yet officially published by IMO and are assumed to be released in the near future and under the current title, “Guidelines for the Reduction of Underwater Noise from Commercial Shipping.”  There still is an open question within IMO whether the guideline’s title should be revised to include reference to adverse impact of marine life.  The body of the guideline is relatively solidified with a draft approved by the IMO’s Design & Equipment (DE) Committee in 2013 and the Marine Environment Protection Committee (MEPC) in March 2014.
The guideline’s Preamble notes that “Concern has been raised that a significant portion of the underwater noise generated by human activity may be related to commercial shipping.”  It goes on to note that international (scientific) community recognizes such sound may have both short-term and long-term negative effects on marine mammals and other aquatic life.  The proposed guidelines were specifically developed to be applicable to any commercial ship, yet exclude any naval ship or vessel that deliberately puts sound into the ocean, such as seismic or sonar systems used in  oil and gas exploration.
As noted in the guide, the purpose of the non-mandatory guidelines is to provide general design advice with respect to the mitigation of vessel generated underwater noise.  The guidance is mostly aimed at ship designers, shipbuilders and ship owners.  The guide’s primary focus is on the main sources of underwater noise generated by propellers and onboard machinery.  It also mentions that hull form and operational aspects can be factors as well.  Much, if not most, of the underwater noise is caused by propeller cavitation, but onboard machinery and operational modification issues are also relevant. The optimal underwater noise mitigation strategy for any ship should at least consider all relevant issues above.
These Guidelines consider common technologies and measures that may be relevant for most sectors of the commercial shipping industry. Designers, shipbuilders, and ship operators are encouraged to also consider technologies and operational measures not included in these Guidelines, which may be more appropriate for specific applications.  The draft guideline contains more detailed information regarding prediction of underwater noise, underwater noise measurement standards, ship design considerations, treatment of on board machinery, additional technologies, operational factors and maintenance considerations.  Most importantly, Shipping should be relieved that the draft guideline does not provide any numerical noise limits at this time.
Both the new airborne noise regulation and the draft underwater noise guideline are available from the IMO website.  If you have difficulty obtaining the documents, feel free to contact the author. 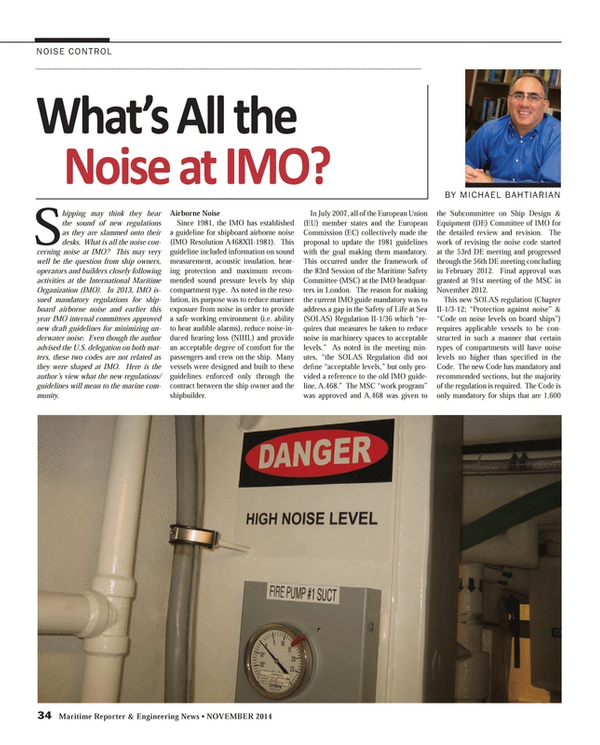 Read What’s All the Noise at IMO? in Pdf, Flash or Html5 edition of November 2014 Maritime Reporter