More so than many other fields of business, the maritime industry is focused on cost, which in turn gives the appearance of being conservative towards technology. Of course, we have magnificently technical ships operating with equipment that wouldn’t look out of place in a NASA lab, but in general, it can take decades for a technology to become mainstream. Unless it becomes mandated by the IMO. Vessel tracking is a partial exception to the rule though, with many fleet owners realizng its potential for more cost-effective operation and improved vessel and personnel security.
Knowing the exact position of all vessels in a fleet, in a software solution designed to fit with your own logistical processes, can significantly improve efficiency. If a ship arrives early or late, more often than not there will be an associated cost. If this can be identified during transit then the early or late arrival can be negated or at least planned for. Likewise, if by knowing the positions of your fleet of workboats means that you can route the closest vessel to the next job, then significant fuel cost savings can be made. With modern tracking systems, the way data is used is just as important as knowing where a vessel is at all times. But there are countless ways to apply the data to the benefit of efficiency for a single ship or fleet, so providing easy, reliable access to position reports is vital.

Meet RockFLEET
RockFLEET is an advanced new tracking unit for the professional maritime environment. During its design phase, the team decided that in order for the position data it provides to be of the most use, as well as being available via Rock Seven’s own fleet viewer ‘The Core,’ it must also be available in any software system the user chooses. Using a standards-based API, the customer can integrate tracking data from RockFLEET into their own applications. Typically this means that RockFLEET tracked assets can be added to existing fleet management software, which invariably is designed around an owner or operators own logistics.
With accurate vessel location data available, the opportunities are endless and only down to the creativity of the user. For instance, a current Rock Seven customer uses location data to manage payroll of personnel.
Essentially, personnel get paid different amounts depending on whether the ship is at sea, in international waters, in port or transiting regions with high piracy incidents.

Tracking Without Ship’s Power
The above user is a private security company involved in anti-piracy operations. It actually gets location data using RockSTAR, the handheld version of RockFLEET, which is a new fixed unit that can be fitted anywhere on board. Completely waterproof and with no moving parts, it is a robust, ultra-compact (13cm diameter / 4cm high) device with multiple mounting options.  The physical design of RockFLEET was in part driven by the security challenges faced by vessels facing the issues of modern piracy.
The unit itself is designed to look anonymous; as standard there’s no name on the outside. It works from ship’s power, but it uniquely has a backup battery inside. Which is important should a vessel be hijacked and the main power cut.
Knowing the location of all friendly vessels in a region is vital to organisations with a stake in ensuring safe passage through known piracy hotspots. With an operational vessel/fleet tracking system, ship owners and fleet managers will know where their ships are at all times. This information can be fed to authorities, private anti-piracy companies and the naval forces patrolling piracy hotspots to build a clear, near real-time picture for domain awareness. The value of this information should a vessel be hijacked is obvious; knowing the last whereabouts of a vessel provides responders with a starting point should a hijacked vessel’s tracking system be disabled by pirates.
Today’s pirates know that many commercial vessels are tracked, especially those would be targets sailing in what are known to be hostile waters. So disabling vessel tracking equipment on board is a sensible action for said pirates after a hijacked ship’s crew have been subdued and because most tracking units are powered by the vessel, finding and cutting the power supply isn’t hard. RockFLEET however, is the only device of its kind with an internal battery back-up, so can continue to transmit position for up to two weeks if external power is cut.
With facility to mount covertly, this makes it especially suitable for vessels traversing piracy hotspots.

Leveraging the Link
Understanding the cost conscious attitude in the maritime industry, it’s important to provide added value to persuade ship owners of the financial viability of ship tracking. RockFLEET operates on the Iridium network, specifically using the ‘Short Data Burst’ (SBD) capability. This enables pole-to-pole global coverage on a Pay As You Go basis. With no annual contract required, the user only pays for the months the system is in use and pre-purchases credits for transmitting tracking positions. An optional module enables RockFLEET to switch automatically to GSM services when in range, providing further cost savings.
The system obtains a position using the GPS satellite network and then transmits that position at user-defined intervals. A single location transmission uses a single pre-paid credit, making the RockFLEET approach to tracking extremely cost-effective. Tracking data is viewed on the Rock Seven fleet management platform, The CORE, or as described above, on the user’s own fleet management system. If a user doesn’t not have their own internal system, The CORE fleet management platform provides a secure, user friendly web-based tracking service that will support security and logistics world-wide.
Further value can be gained from utilizing the Iridium network for ‘Machine 2 Machine’ (M2M) applications. RockFLEET has a wired (serial) API which means it can be controlled by other systems that may transmit data via Iridium.  For example, existing telemetry systems on a vessel that usually collect and send environmental data via terrestrial networks or other, more expensive satellite networks, can easily be expanded to transmit from anywhere in the world via the RockFLEET unit, at the same cost per transmission as a simple location message.
This can be useful to receive fuel consumption data from engine management systems or maintenance alerts from other equipment on board, in a very cost effective manner. Much like the RockFLEET approach to how position data is integrated with proprietary software solutions, this M2M data capability has practically endless applications, only limited by the creativity of the user.
Crew Welfare was also a design consideration with RockFLEET. As well as the wired serial API, it features a wireless Bluetooth LE API, which allows mobile apps to send and receive their own data via Iridium.
At present, the Rock Seven Connect app uses this feature for crew messaging but it could be used i.e. for weather routing and navigational warning information.

The Author
Nick Farrell is Director of Rock Seven, a UK based developer of Iridium tracking system for maritime, land and aeronautical users. 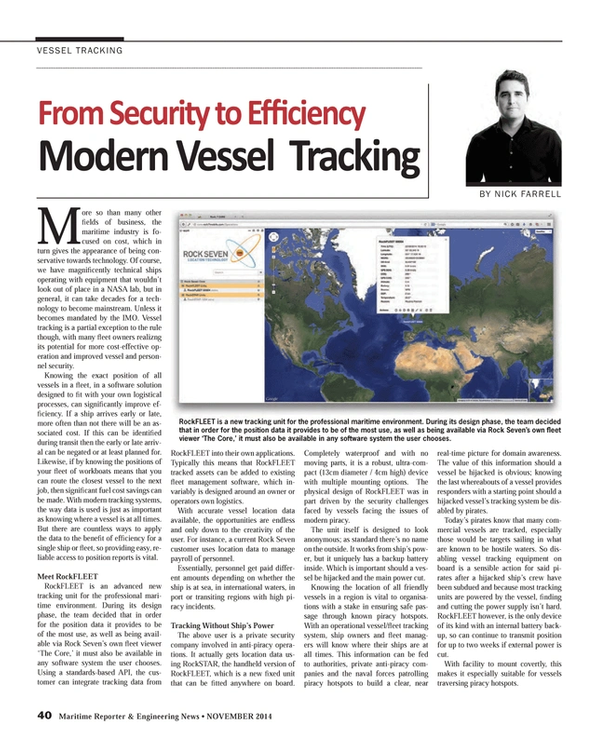