Orders for six ships won by British Shipbuilders make it certain that the company's sales target for the current period will be achieved well ahead of schedule.

The recent orders are worth a total of $125 million, and include two ships for the People's Republic of China. These are SD 14s, the most successful series-built merchant vessel in British shipbuilding history.

Ordered by China Merchants Steam Navigation for delivery in the first quarter of next year, 15,000-dwt ships will be built by Austin and Pickersgill at Sunderland in Northeast England. They will be operated by the Canton Branch of the China Ocean Shipping Company.

Two 66,200-dwt Panamax bulk carriers are to be built by Govan Shipbuilders on the River Clyde in Scotland for an unnamed Far East owner. They will be the largest vessels ever built by the yard, and are scheduled for delivery in January and May 1982.

Kincaid in Scotland — will manufacture the engines for all six ships.

Britain's state shipbuilding concern now needs orders for only three more merchant vessels to meet a sales target of 45 for the period September 1979 to July 1981. As it will now clearly achieve its objective much earlier than expected, the group plans to set a more ambitious target.

The 42 merchant ships ordered from British Shipbuilders since September 1979 are worth about $787 million, and have a total deadweight of more than a million tons. In the same period, the group has won orders for naval vessels worth $225 million.

Derek Kimber, chairman and chief executive of Austin and Pickersgill, said the Chinese orders followed four years' endeavor to get to know that country's shipping.

The 118th SD 14 was completed recently for a Panamanian shipping line, and Austin and Pickersgill is currently building vessels of this type for Greek and Panamanian owners. SD 14s have also been built under license in Argentina, Brazil, and Greece. 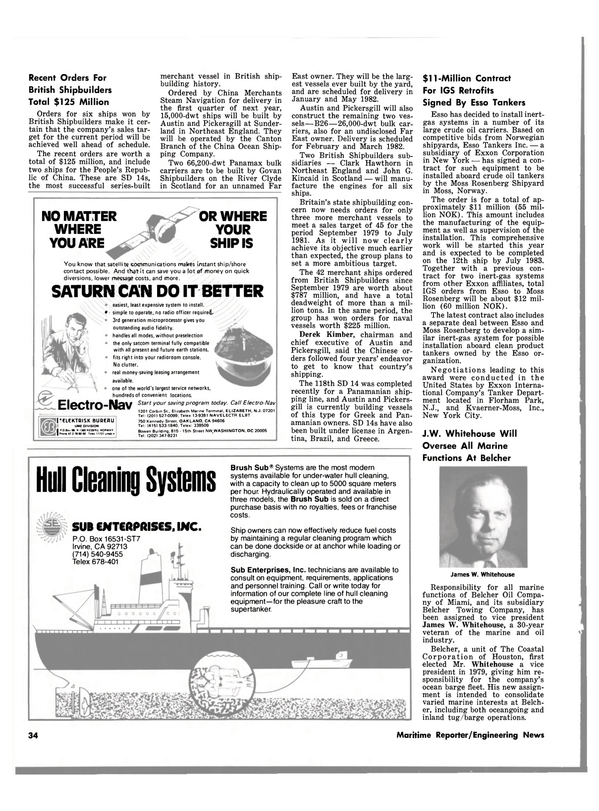