Jack T. Day was elected the national president of the Naval Civilian Administrators Association at the annual convention, which was held recently in Bremerton, Wash.

Mr. Day is the director of management engineering at the C h a r l e s t o n Naval Shipyard in Charleston, S.C. He has been employed by the Charleston Naval Shipyard since 1956, except for a two-year tour with the U.S.

Other o f f i c e r s elected were Henry Romero, vice president, who is the labor and employee relations director at the Naval Air Station, North Island, San Diego; Robert Davison, secretary, who is head of the Surface and Anti-Air Warfare Division of the Combat Systems Office at the Charleston Naval Shipyard; and Fred Hicks, t r e a s u r e r , who is head of the Budget and Statistics Division of the Comptroller Department at the Charleston Naval Shipyard.

The Naval Civilian Administrators Association is a national organization of senior level managers e m p l o y e d in Navy Civil Service. The total membership is approximately 600, organized into 12 chapters distributed among seven naval shipyards, three aviation activities, the Naval Ship Engineering Center, and one division of the Naval Facilities Engineering Command. Because of the positions held by the members, they exercise responsibility o v e r many thousands of engineers, scientists, administrators, and other employees in the activities in which they are located.

The purpose of the organization is to contribute to the improvement of management of the Department of the Navy. 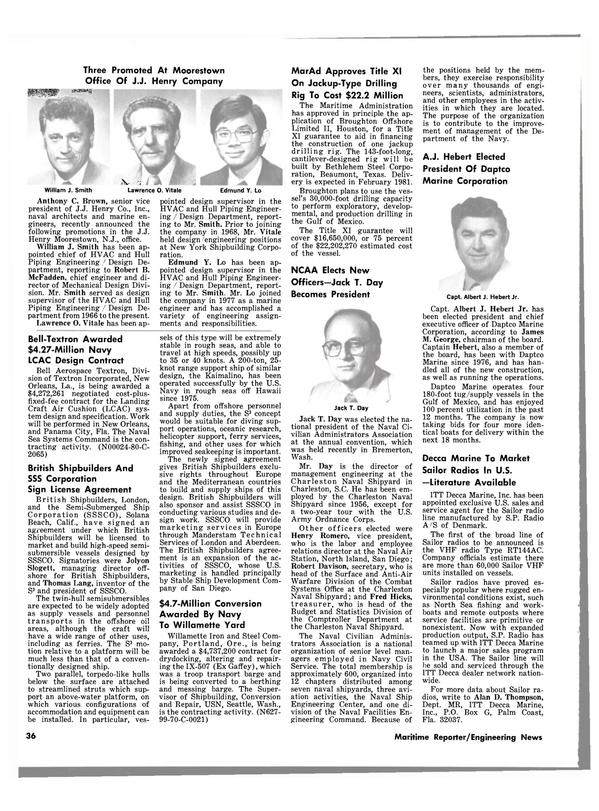