The first five shrimping boats of a 20-vessel contract have been delivered to the Guyana Government- owned Guyana Fishing Company, Ltd., by Bender Shipbuilding & Repair Company, Inc., of Mobile, Ala.

The initial deliveries were made recently to Guyana Fishing representatives at the Bender facility.

According to Guyana officials, the project is being funded by the Inter-American Development Bank of Washington, D.C.

Each of the shrimp boats is of steel construction, single hard chine, with dimensions of 72 feet by 20 feet by 10 feet 9-inches.

Refrigeration equipment is supplied by TMC of Tampa, Fla., and installed by Marine Refrigeration, Inc., of Mobile. Each boat is equipped with a single TMC unit consisting of one OM636 Mercedes diesel engine and an 05DA Carrier diesel compressor, coupled to a Mercedes diesel. Also installed is one 32-tube condenser cooled by a Jabsco, Model 6400, pump. A standby 05DA Carrier compressor is mechanically driven off one of the main engine's auxiliary drives.

Because there is a strong local market for fish in Guyana and an equally strong Caribbean export market, the intention of Guyana Fishing Company, Ltd., will be to take maximum advantage of the catch of incidental fish. The refrigeration system is designed to freeze 500 pounds of shrimp and 1,000 pounds of fish in 18 hours and to maintain a hold temperature of minus 25 degrees C.

The fish hold is insulated throughout with 8 inches of polyurethane covered with fiberglass.

Electronics were installed by R.H.

According to Bender president Tom Bender, his company's bid for the project was such that it allowed the buyers to procure two additional vessels and remain within the fixed amount of the I.D.B. loan. These vessels are also currently under construction. 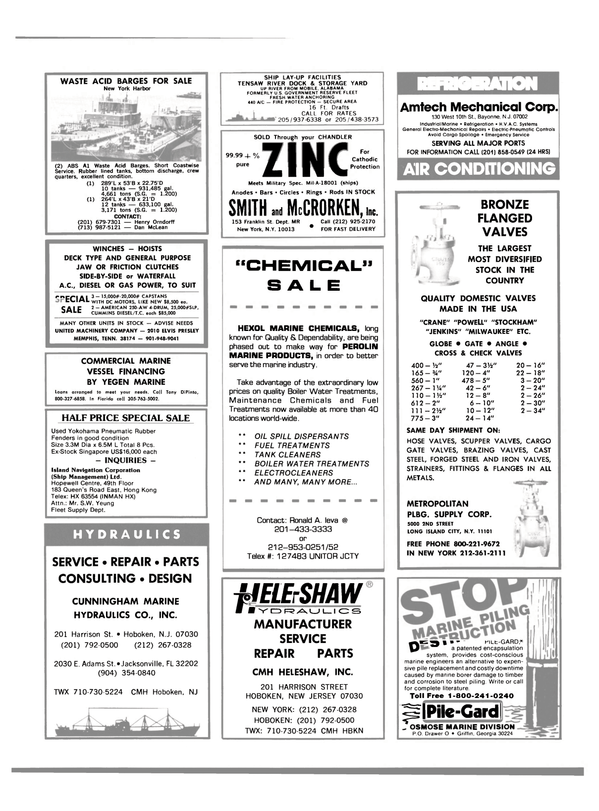