Holland America's liner Veendam recently visited Newport News Shipbuilding, Newport News, Va., for her annual overhaul. The schedule called for 12 days. Even before the 627-foot luxury liner was docked, her lifeboats were lowered and towed away for major repairs.

When the ship left the yard 12 days later, the lifeboats had been stored back in position and a total of 117 scheduled maintenance and repair jobs, plus others added on inspection at the yard, had been completed.

More than 700 shipyard employees and the Veendam's crew worked around the clock each day on the ship to get her out on time. Work performed was as major as repairing a 30-foot section of the forepeak, and as minor as repairing the dimmer switch over the captain's table in the dining room.

With the Fitters serving as the lead trade, the 30-foot, 18-ton section was cut loose and taken to the shipyard's steel fabrication shop for internal structural repair. "The internal steel was replaced in record time," says Marshall Branch, ship repair manager at Newport News. The forepeak section was then rigged back into position, fitted, and welded in place, using full penetration welds. The welds were then tested ultrasonically.

Another major repair performed during the 12 whirlwind days was replacement of the lignum vitae inside the starboard stern tube and strut bushings. First, the Veendam's wheels and couplings were jumped. Shafting was then removed, providing access to the lignum vitae. Workers from the yard's sheet metal department chiseled out and replaced the wood— no small task in itself as lignum vitae is the world's hardest wood. Other workmen then bored the bushings before replacing the shafting.

Other work included the usual underwater repairs and maintenance, inspection and certification, cleaning and painting of the ship and rooms, laundry repairs, and sewage treatment systems maintenance. "Completing such a vast amount of work in just 12 days was quite a feat," says Marshall Branch.

Holland America has been sending cruise ships to Newport News Shipbuilding for routine and emergency maintenance and repairs for years. Two other Holland America liners, the Statendam and Volendam, followed the Veendam to the shipyard for their annual overhauls. 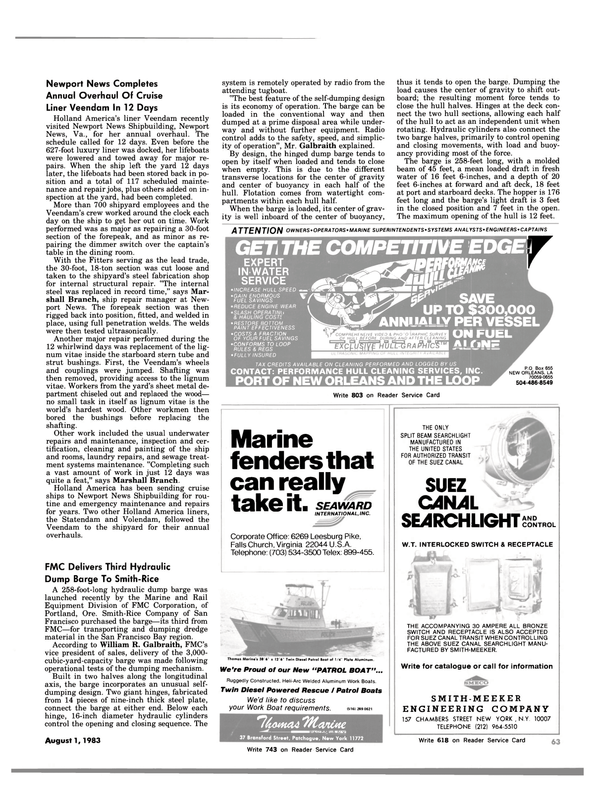