August 26-28, Louisville, Kentucky The first annual International Inland Waterways Conference and Trade Show will take place August 26-28 at the Kentucky Fair and Exposition Center in Louisville, Ky. This conference and trade show, possibly the most comprehensive of its type ever presented, will be of major importance to all rivermen—waterway users, port and waterway builders, operators, maintainers, shippers, and shipyard and repair facility managers.

The sponsors of this ambitious undertaking, which also is seen as providing the industry with a focal point for further development, are the National Waterways Foundation of Arlington, Va., The Waterways Journal, and Inland Waterways Educational Services, Inc., of Louisville, Ky.

"The Foundation's primary aims and desires in sponsoring this conference are to foster a greater understanding and public awareness of the importance of inland water transportation to the growth and economic development of the nation and to advance the waterway industry's technical capabilities and efficiencies through research and educational assistance," said J. W.

Hershey, board chairman of the National Waterways Foundation.

David A. Wright, vice chairman of the Foundation, stated: "It is absolutely vital to understand the importance of the inland waterways to our nation. If the degree to which waterways are appreciated in other countries can be adequately conveyed to our leaders, we will have taken a giant step toward seeing that our waterway system is kept moving forward." "Industry people will be able to come to one location to view what's new on the market, attend functional workshops, and hear industry leaders express their opinions on topical subjects," said Arthur G. Meyer, executive vice-president of Inland Waterways Educational Services.

Vice-President George Bush and many other key figures of national and international prominence will be present to express their views on the future growth of inland waterways. The People's Republic of China is sending a three-member delegation headed by Ma Xide, director of administration of inland water transportation, who will talk about the development of water transportation in China. James B. Newman, chief of the Ports and Railways Project Division of World Bank, will speak on water transportation financing in developing nations.

A three-member panel will address water transportation commodities and the world economy.

Dr. M. J. van Rooijen with the Royal Dutch/Shell Group in Rotterdam, Netherlands, will speak on coal; Mashhour Ahmed Mashhour, chairman of the Suez Canal Authority in Ismailia, Egypt, will speak on oil, and Lawrence F. Dewitt, director of commodity marketing for Cargill, Inc., will speak on grain.

8:30 am-10:30 am Keynote speaker, the Hon. George Bush, vice-president of the United States, speaking on the "Role of Water Transportation to the Future Growth and Development of the U.S. Economy." 10:30 am—3:30 pm Trade Show Saturday, August 27 General Session—International Day.

8:00 am-8:45 am "Water Transportation Financing in Developing Nations" by James B. Newman, chief of Ports and Railways Projects Division, World Bank.

7:30 am-8:00 am Buffet breakfast sponsored by the National Waterways Foundation.

8:15 am—9:00 am "Water Transportation 2000: How Important is Low-Cost Waterborne Transportation to the Future of Your Nation?" by Dr. Mark Baldwin, Imperial College of Science and Technology, London, England.

will describe the National Waterways Study.

The morning sessions will be followed by five hours of exhibitor functions in the 130,000-squarefoot exhibit area of the Kentucky Fair and Exposition Center. To conclude each day, after the close of the trade show, topical workshops are scheduled (See the accompanying tables listing the schedule and the workshops.) DINAMO/OVIA Briefing A briefing for DINAMO/OVIA members will be held August 26, 1983 in conjunction with the "International Inland Waterways Conference and Trade Show" in Louisville, Kentucky.

"DINAMO/OVIA—Joining Together to Improve our Region's Inland Waterways" begins at 11:00 a.m. on the first day of the threeday conference, following a keynote address by Vice President George Bush. The briefing will take place at the site of the confer- ence, the Kentucky Fair & Exposition Center.

Participating in DINAMO/OVIA's one-hour program will be Brig.

The briefing will provide members the opportunity to better understand the implications of the merger of DINAMO and OVIA, and the role members must play if the DINAMO/OVIA effort is to be successful. DINAMO/OVIA members are urged to bring along nonmembers to the briefing.

Those wishing to attend the briefing should contact Peggy Fletcher at the Pittsburgh office, 412/392-4550. 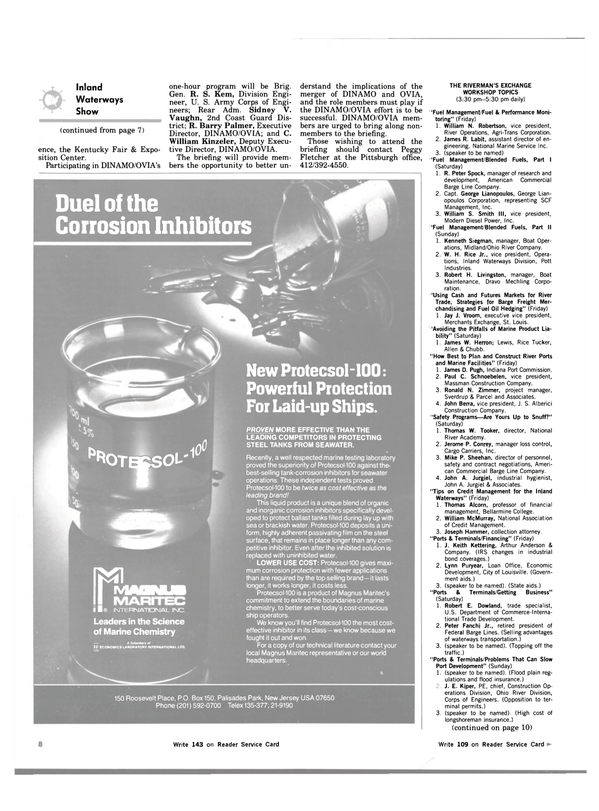