Our nation's economic climate is, to a great degree dependent upon its national transportation system which serves as a vital link in the chain of production, distribution and sale of goods in both domestic and export trade. In order to ensure that this vital system continues to accomplish its mission, national transportation policy must recognize each mode of transportation as an integral cog in the success of the entire enterprise.

Our domestic transportation system today should exist as a balanced system. No mode of transport should reign supreme: all forms—rail, water, motor, air— have important roles to play. No single one of those transportation modes can meet the needs of all consumers or shippers.

The continued competition between them can only benefit the economic needs of the nation as a whole. So our national transportation policy must promote that competition above all else. Unfortunately, the current economic, regulatory and legislative environment instead tends to diminish competition among the modes where that competition should be natural and unfettered.

We in the barge and towing in- dustry agree with the principle that the users of a transportation system should pay their fair share of the costs for that system. However, we disagree with the current administration's proposal allocating to the waterways freight industry of 70 percent of total federal expenditures. This, on top of the currently mandated 10 cents per gallon fuel tax, is hardly what anyone reasonably could call a "fair share." The proposal also would authorize segment-specific ton-mile fees providing for recovery of 70 percent of the capital expenditures of the Corps and TVA assigned to commercial waterways transportation projects. Moreover, the proposal contemplates imposition of congestion fees on top of the rest.

Instead of being a compromise in the administration's scheme between the "ideal" and the status quo, which is how it is advertised, the level of recovery could actually exceed 100 percent of the costs.

For almost two hundred years, a combination of geographic, political and economic forces converged to forge a principle of federal responsibility for construction, operation, and maintenance of the inland waterways. This policy dates back to the earliest days of the nation when Congress, in order to encourage interstate transportation, forbade any charge for the use of inland waterways. The policy was enunciated, among other places, in the Northwest Ordinance of 1789, which declared that inland waterways "shall be common highways and forever free . . . without any tax, impost or duty therefor." That policy went out the window, with the Inland Waterways Revenue Act of 1978, which established a tax on fuel used in commercial transportation on 26 inland and intracoastal waterway segments, the revenues from which are deposited in the inland waterways trust fund. The tax, increasing from 4 cents per gallon in 1980, to 6 cents currently, and to 10 cents by 1985, has created a change in national policy so new that the impacts of the legislation have not yet been fully felt, much less analyzed.

The U.S. Treasury is now collecting approximately $5 million for each 1

However, Congress has not authorized construction of any new waterway facilities since 1976, with the exception of Lock and Dam 26, for construction of which the congress imposed the waterways fuel tax in the first place.

The barge and towing industry is paying user taxes, and has been paying user taxes for three years, but not one penny of the trust fund revenues has yet been authorized for use on new projects. If the federal government won't use revenues already collected, what is the rationale for seeking still more taxes?

There are three powerful reasons, any one of which makes the imposition of new and higher waterways taxes bad policy. First, there has been no accurate cost allocation study performed. What is the portion of the Corps of Engineers construction, operation and maintenance cost that should be attributed to the barge and towing industry, and what portion properly should be assigned to the other beneficiaries?

Second, we in the industry feel strongly that all modes of transportation must be treated with an even hand if the nation's interests are to be served. To tax the waterways industry for its services at the same time that the railroads continue to receive vast federal outlays each year would upset further the imbalance which already exists between these two modes.

Finally, it seems clear that this whole exercise is a part of the administration's laudable attempt to drive down the budget deficits.

But, how realistic? And with what effect? The $36 million in user taxes collected this year and applied to federal budget deficits of around $190 billion represents a trivial contribution . . . about 0.02 percent. . . towards balancing the federal budget. To the waterways operators trying to survive in this depressed economy, the increased tax could tip the balance toward bankruptcy.

Ultimately, the combination of increased user taxes on the barge industry, and further deregulation of the railroads would raise the cost of goods shipped domestically as well as making U.S. goods less competitive on world markets.

Both rates involve volumes of well over half million tons per year, or substantial transactions.

Barge transportation currently moves some 46 percent of the grain which is carried to U.S.

ports for export. The low cost and efficiency of water transportation keeps our nation's farmers competitive in the world market, thus improving the U.S. balance of payments.

Higher costs of water transportation resulting from higher waterway user taxes would have the opposite effect. The cost of shipping grain by barge from Clinton, Iowa, to the Gulf Coast for export is currently $4.07 per ton. Cost recovery of 1.1 mills per ton mile, which is what this administration proposes, would add $1.51, increasing the cost of shipping grain by barge 27%. This figure translates into an increase of 4 cents per bushel of wheat. Who will absorb that cost?

The U.S. has no monopoly on the world's food supply. Buyers go where they can obtain the best price. Our nation needs to meet the prices of competing export countries, or costs will be shifted permanently to foreign customers.

Someone has to foot the bill—producers, shippers, con consumers.

In the short term, the nature of the market will determine who pays. Strong demand would shift costs to consumers. Weak demand, to producers. In the long term, however, it would be the producers who bear the brunt of higher costs because carriers already operate on such thin profit margins that they cannot possibly absorb them.

With as much as one third of their equipment now idle, barge line operators cannot afford more taxes. Even now, many operators cannot pass on the current level of waterway user tax to their customers, who have already borne the brunt of unemployment, plant shutdowns, and lost earnings as America's primary industrial production has stagnated. In order to maintain a minimal level of activity, our members are absorbing the waterway user tax, along with other operating expenses.

In short, a diverse constellation of conditions makes the imposition of additional waterway user taxes a very unwise move, one which could well result in reduced tax revenues from a great number of other sources. 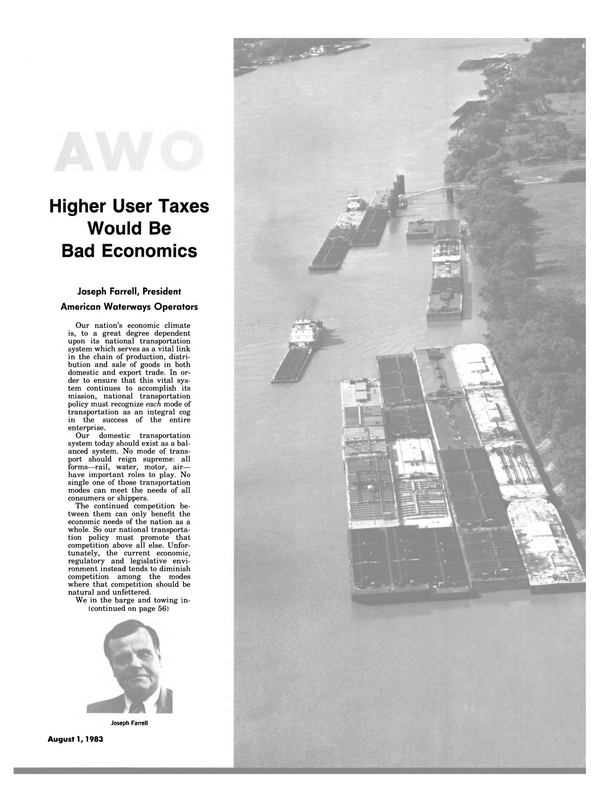