A major modernization and expansion of ship repair facilities at the Newfoundland Dockyard in St.

Begun in late 1981, the project was completed slightly ahead of schedule. The upgraded facilities will enable the yard, which is operated by Canadian National, to compete competitively in the ship repair market.

The C$30-million project was made possible through extensive financial participation by the Government of Newfoundland and Labrador in the form of loan guarantees and interest subsidies.

The modernization includes a Syncrolift ship elevator, side transfer facility, and three repair berths as well as various ancillary equipment, including a tower crane 147.6 feet high. An existing wharf was extended by 301.8 feet to provide additional berthing space.

The Syncrolift marine elevator system, developed by Pearlson Engineering Company of Miami, is recognized around the world as a fast, cost-effective way of drydocking small- and medium-sized ships.

The lift itself is a submersible platform, on which are mounted four heavy steel rails. To drydock a ship, a cradle matching the contours of the hull is assembled from prefabricated, reusable standard components. Both the keel blocks and support members are mounted on double-flanged steel wheels that rest and move on the rails. When the cradle is ready, the platform is submerged, the vessel is maneuvered into position over the cradle, and the platform is hoisted by cables driven by synchronized electric motors, at a speed of 22 centimeters (8.58 inches) per minute.

The lifting platform installed at the Newfoundland Dockyard is 283.8 feet long and 65.6 feet wide, capable of handling vessels up to 295 feet long overall and 4,000 tons displacement.

When the vessel has-been raised, the cradle is moved by a powerful tractor to the transfer table. This is also mounted on rails, at right angles to the lift platform. The table is then moved laterally until its surface tracks align with those of a vacant repair berth. The tractor is then used again to place the cradled vessel on the berth, and the lift and transfer table are free to move other vessels.

The three repair berths are each about 348 feet long, and together cover a total area of approximately 75,000 square feet, constructed of concrete deck on steel pilings. There are an additional 21,500 square feet of paved surrounding area.

The same concrete and steel construction was used for the wharf extension, which is about 302 feet long and 32.8 feet wide. The existing 567.5-foot-long graving dock, which was placed in service in 1926, will continue to be used, primarily for larger vessels. 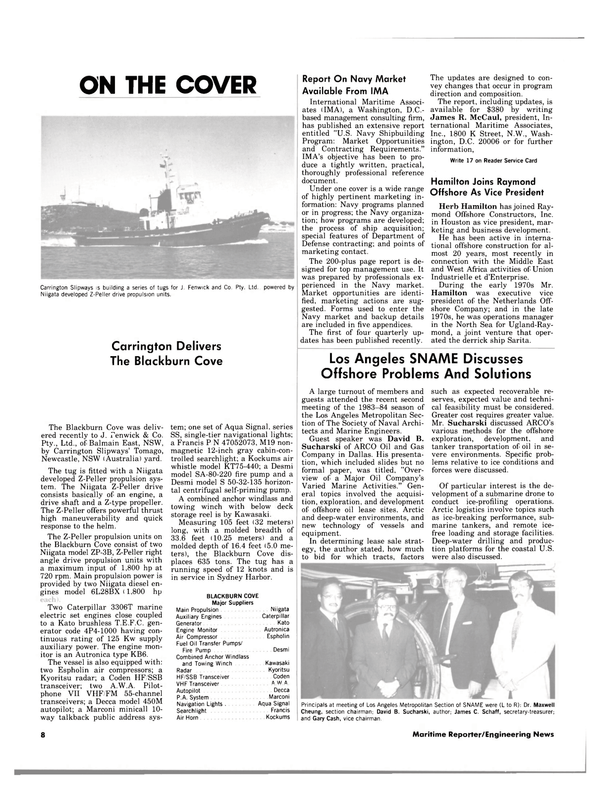