Philadelphia Gear Corporation, King of Prussia, Pa., recently concluded a licensing agreement with Ishikawajima Ship and Chemical Plant Company, Ltd. (ISC), a subsidiary of IHI, Tokyo. This agreement, reversing the normal flow of technology out of the U.S., affords Philadelphia Gear the opportunity to broaden its North American sales activities in high-technology marine propulsion with a service-proven system.

Under this agreement, ISC has granted Philadelphia Gear an exclusive license for the manufacture and sale of the Duckpeller 360- degree steering/propulsion system in the U.S.

and Canada. The system, consisting of twin drive units complete with propellers, is currently available in five sizes ranging from 2,000 to 5,000 shp.

The features of the system may well revolutionize workboat propulsion in the U.S.

Combining thrust and steering in a single package, it will lower construction, fuel, and maintenance costs, as well as simplify vessel operation.

The Duckpeller, with its unitized design, transmits the power of the main engine to the propeller via two bevel gear sets. The twin propeller systems, which are equipped with energy-efficient Kort nozzles, can be rotated through 360 degrees, effecting propeller thrust in any direction. This insures high maneuverability in all vessel motions, including on-thespot turning, sideway movement, and rapid backing, without the necessity of a rudder.

The Duckpeller is furnished with a single-lever, remote-control console, incorporating a micro-computer that automatically synchronizes the two propulsion units for movement in the desired direction.

The Duckpeller system has been used successfully and reliably overseas aboard more than 180 vessels, including tugboats, ferryboats, pusher boats, barges, work platforms, dredges, and floating cranes.

For more information and free literature on the Duckpeller, Write 80 on Reader Service Card 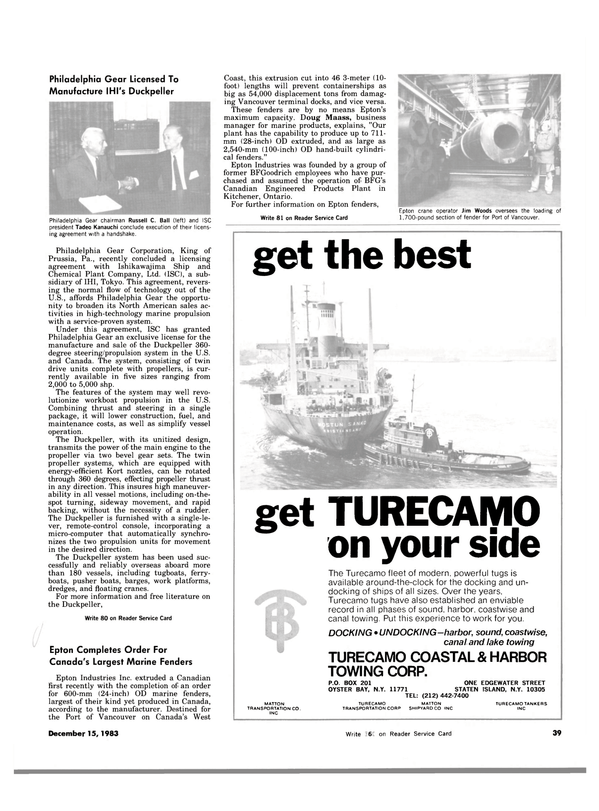