The first example of Sulzer's new RTA superlongstroke diesel engine series went to sea recently, just about 22 months after the new fuel-efficient series was announced to the shipping industry.

The initial installation is a 7-cylinder 7RTA58 model powering the 80,000-dwt ore/bulk carrier Zaragoza, built for Wayland at the Nagasaki shipyard of Mitsubishi Heavy Industries Ltd. With a maximum continuous rating of 11,410 bhp at 105 rpm, it gives the ship a service speed of 13.9 knots.

The race to be the first RTA engine to go to sea has been closely run. The second installation was in the reefer Atlantic Universal, which went on sea trials only two weeks after the Zaragoza. This ship, also built at the Nagasaki yard, is also powered by a 7RTA58 engine but at the higher rating of 13,440 bhp at 123 rpm to give the ship a service speed of 20.1 knots.

Both 7RTA58 engines for these ships were built at Mitsubishi's Kobe engine works. The third RTA to go on sea trials was an IHI-built 5RTA58 for the Laeisz reefer/container vessel Puritan, building at IHI's Aioi yard. The fourth RTA, another 7RTA58 from Kobe, has been installed in the 14,000-dwt container/car carrier Rainbow Ace building at Mitsubishi's Kobe shipyard for Mitsui-OSK Lines. 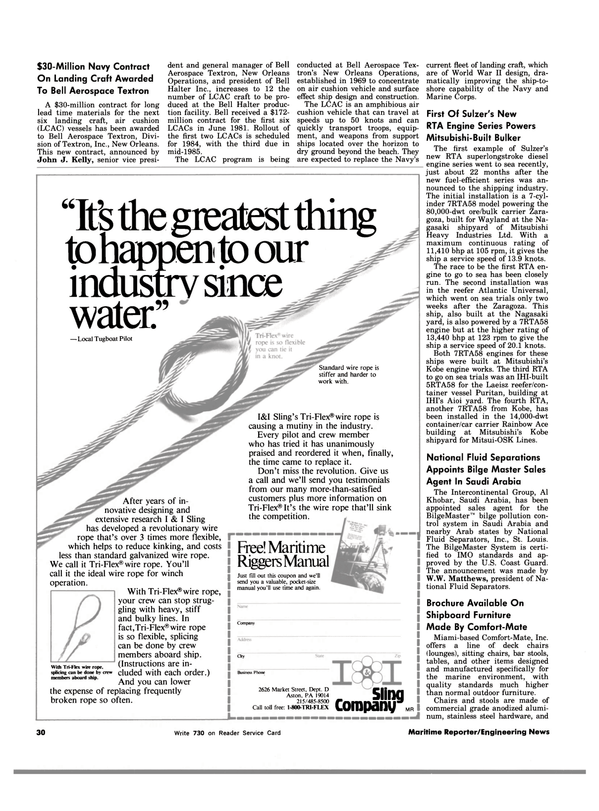