Designs for the 21st century

The U.K.'s public-funded maritime rescue organization — the Royal National Lifeboat Institution (RNLI) — is well into its ambitious and costly newbuild program to replace the aging Waveney and Arun class lifeboats.

Such a move is the result of much long term research and development work by the organization's inhouse technical team with the result that the vessels, in the new classification types of Severn and Trent, are some of the most advanced rescue craft of their type anywhere in the world.

Renowned for more than a century for the efficiency of its rescue operation, the RNLI has been well served by the Arun and Waveney classes — which at the time of conception were the state-of-the-art afloat boats of the fleet. Twenty years later, the replacements which take up the sheltered, deep water moorings around the British coast are again of two different sizes, with the Severn at 56 ft. (17 m) and the Trent at 46 ft. (14 m), but are capable of greater speeds in keeping with the RNLI's modern strategy to be able to reach virtually any point 50 miles off the coast in just two and a half hours.

Reliability and ease of maintenance have been key considerations in the design of both vessels and much debate and testing has taken place to determine the most efficient hull form for the purpose.

For both types, hard chine and round bilge versions were subject to early consideration, although gut reactions in favor of the former were strong early on. Decisions were, however, complicated by the need to provide a relatively high free-running speed with full propeller protection and the ability to take the ground. Ducted propellers were rejected and a decision was made to incorporate deep tunnels into the hull form.

Extensive tank testing of scale models was carried out as part of the design process, followed by instrumented sea-keeping tests which used the tank-test models fitted with engines for free-running under radio control. The models, which were of round bilge and hard chine hull form, were tested in a variety of equivalent sea conditions ranging from Force 3 to 7. Extensive tests were carried out to investigate self-righting capabilities, seakeeping ability at various speeds in regular and irregular waves and maneuverability in calm waters.

Although both hull forms were subjected to rigorous testing, the technical team spent little time debating the material of construction, deciding early on that the combination of strength and relative light weight afforded by fiber reinforced composite (FRC) would prove the ideal choice. As a result, the Trent's hull, deck and superstructure are of sandwich construction and a single skin selected for the bottom shell of the Severn.

Another vital design consideration was the need to limit ingress of water by suitable sub-division to guard against capsize in the event of damage to the hull.

The latter also relies upon its sandwich construction for the provision of appropriate double bottom protection.

The now traditional reverse sheer line of the hull, which drops away to a point just aft of midships to assist in the recovery of survivors from the water, is adopted.

A survivor lifting A-frame is provided to assist with the requirement.

The Severn also has a well deck to port and starboard to assist further in survivor recovery.

For operations in shallow water or confined space, the Severn carries an inflatable on the wheelhouse roof.

In a major departure from all other RNLI boats, the engine room for both new classes is positioned right aft to provide more space and facilitate maintenance.

Engines can be removed easily when required through large hatches positioned on the after deck.

Fuel is contained in flexible bag tanks supported by, but not attached to, the vessel's structure.

The bags contain foam blocks to maintain their shape when not completely full — and with maximum capacity of around 1,150 gallons (5,200 liters), ensure a range of not less than 250 miles at maximum speed.

The 16-in. axial flow fans are hydraulically driven from each main engine — the faster the engine runs, the faster the fan goes. Specially developed capsize flaps are incorporated in both the intake and extractor trunking to prevent flooding in the event of a capsize. The Severn is also fitted with a bowthruster for low-speed maneuverability, as its large superstructure and fly bridge make it prone to cross winds at low speed.

Interior space for both vessel types has been used carefully. The Severn's deckhouse contains permanent seating for a crew of six and a doctor, together with two stretcher positions.

There is provision for two additional stretchers in the lower survivor space.

Aboard the Trent, seating for ten survivor space forward of the fuel tank space with access from the wheelhouse and the foredeck. This area also houses a toilet, galley and stowage for lifejackets.

The wheelhouse has seating for six crew and an honorary medical advisor. The coxswain's seat is on the port side of the wheelhouse unlike in other RNLI boats where it is on the centerline.

A flying bridge situated on the wheelhouse top provides repeat engine controls and monitoring equipment, steering and some communication equipment.

To date, an early prototype Trent has performed in line with expectations while on temporary station duty at Alderney in the Channel Isles, and the first production vessel has now been accepted at Ramsgate.

Eight additional Trent class and four Severn class lifeboats are now in various stages of completion with the first Severn due to enter service at Stornaway early next year. Preproduction examples of each have undertaken a circumnavigation of the British Isles to obtain wider experience of different environments and to enable as many different people as possible to comment upon them.

Selected builders and outfitters are in the main located on England's south coast and include FBM Marine, Halmatic, Berthon Boat Co., and renowned lifeboat builder William Osborne, of Souter and Osborne. Much of the selection process has had to be based around the few existing yards which can deal effectively with the special demands of FRC construction. FBM Marine and Halmatic, for example, have in recent years invested considerable amounts of money in improving GRP/ FRC facilities.

In addition to the conventional lifeboats, the RNLI, which last year raised $95 million from the British public for its operation, has also turned its attention to its substantial rigid inflatable fleet. As such, increased production of the Atlantic 75, designed and built by the RNLI at its Inshore Lifeboat Center in Cowes on the Isle of Wight, is in hand. These boats, updates of the original Atlantic 21 which has been in operation since 1972, are capable of up to 34 knots and will join the Trent and Severn in ensuring that the RNLI enters the 21st Century with all the makings of a modern fleet. 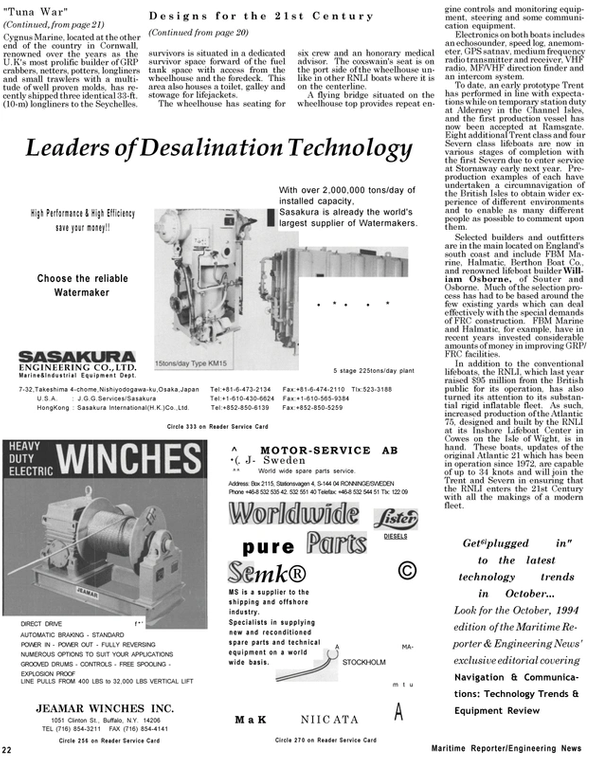 Read Designs for the 21st century in Pdf, Flash or Html5 edition of September 1994 Maritime Reporter