State Of The German Shipbuilding Industry

Observers of international economical developments note with surprise that German industry is in better shape than most of them had expected a year ago.

As in 1992 the full impact of worldwide recession reached Germany, it was with some two years' delay, since in the wake of the reunification of the country, national demands concealed the declining growth in the world economy and compensated for reduced exports.

When in 1993 German industry realized its deficits in international competitiveness — due to an overall low productivity, degraded standards of R&D, expenditures and fading innovation — international competitors had already, for two years, been working on their economic recovery. The public debate in Germany was determined by concerns that with lingering political support, high environmental impositions, increasing public rates, the high level of labor costs and complex tariff regulations, it would take more than just better market conditions for German industry to regain international competitiveness.

This view, however, seems to have been too pessimistic. Indications are that world economy is recovering, and rising export orders have created a more optimistic view throughout German industry and put an abrupt end to the weary discussion of the Federal Republic as a generally uncompetitive location for industrial production.

In major industrial branches first data on their expected 1994 performance have been released, announcing remarkable reductions of costs and an increase of productivity that brings in range the standard of their Far East competitors. In other branches (i.e. the aerospace and the chemical industry or important segments of the machine building industry) leading companies have accommodated their corporate structures and policies to the market conditions and have announced that their orderbooks are filled better than ever expected.

The major German shipbuilding companies stayed in shape, keeping a leading position in important segments of the shipbuilding market, primarily in segments of a highly technological nature.

Facing steadily expanding world trade and the fact that the ships of the world fleets are over-aged to a large extent, the shipbuilding market is expecting a distinct phase of growing demand for new ships.

There is another dimension, however, to the important role that German shipbuilding industry will have to accept in the future.

As the maritime environment offers mankind a large number of solutions in the fields of international security, foreign trade, transportation, environmental problems and the exploration of resources, shipbuilding as the core industry of all maritime economy is to become a branch of significant political importance and extraordinary economical chances for future tasks and developments.

For this reason, and with the manifold and intertwined areas of activity of the maritime industry and other political and economical fields in mind, the German shipbuilding and ocean industries have suggested that a coordinator for maritime matters within the German Ministry of Economics be appointed and a similar field of responsibility within the commission of the EU in Brussels be installed.

The overall bright picture into the future, however, is overshadowed by the building up of excessive, superfluous shipbuilding capacities.

Especially in South Korea, the second largest shipbuilding nation in the world after Japan and before Germany, newbuilding capacities are built up on a large scale.

Within the frames of South Korea's "new industrial policy" (socio-economic development plan 1993-1997), shipbuilding, along with the aeronautics/space and automobile industries, is one of the 15 target industries which in part are supported with direct subsidies from the South Korean government. The expansion of the Korean shipbuilding capacities is directly aimed at the Japanese and West European shipbuilding industries in order to gain an even larger market share, and may well be the start to a new round of ruinous competition.

Furthermore, today's shipbuilding capacities are enhanced by the conversion of naval shipbuilding yards into newbuilding facilities and, last but not least, by increased productivity in the existing shipyards.

Before this background it can be expected that the assumed increase of the demand for new ships will not necessarily ease global competition.

The German shipyards, therefore, will continue their attempts to reduce costs by further rationalization.

Besides this, the industry is taking pains to improve the internal structure of the companies, increase efforts in the fields of R&D, strengthen innovation, integrate inexpensive external capacities in the manufacturing process and find new forms of cooperation among the shipyards. 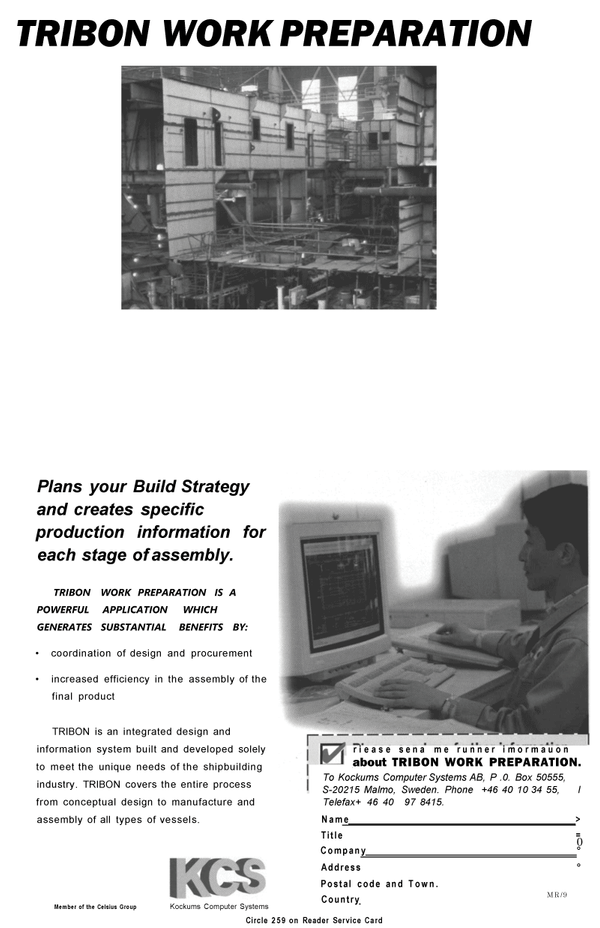