ILU Reports A Disappointing First Half of '94

According to the Institute of London Underwriters (ILU) merchant ship casualty has shown a deterioration during the first six months of the year, continuing the downward trend from the first quarter.

Statistics from ILU applying to ships of 500 gt and more show that in the first six months, 48 ships totalling612,037gt were lost. Compared to the same period last year, this represents eight fewer ships but nearly double the tonnage, up from 308,395 gt lost during the first six months of 1993. However, it must be taken into account that just four ships (a tankers and three bulk carriers) accounted for about 50 percent of the first-half 1994 total.

In addition to the 48 ships, during the first six months another 22 vessels were confirmed total losses as a result of casualty occurring during previous years.

ILU said, "As 1993 showed a distinct improvement in loss ratios, these statistics are disappointing for marine underwriters. Based on updated figures, 136 ships totalling 886,716-gtwere totally lost in 1993.

Thus, unless there is a radical improvement during the second half of this year ... we could be heading for a tonnage loss exceeding one million gt, which would equate with the tonnage lost in 1992." Loss Of Life "Although it is extremely difficult to collate figures accurately, our casualty reports show that 274 people were either killed or reported missing as a result of total and partial losses in the January-June period.

The total includes some passengers," said the ILU. "This figure compares with 613 for the whole of 1993 and 386 for 1992. Our statistics apply only to ships of 500 gt and over, which means that many small fishing vessels and other craft (such as small ferries) are excluded." 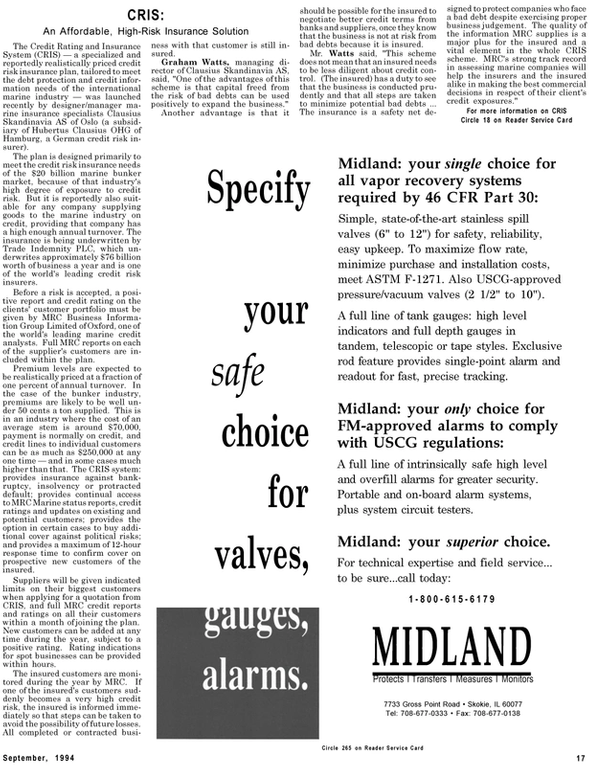 Read ILU Reports A Disappointing First Half of '94 in Pdf, Flash or Html5 edition of September 1994 Maritime Reporter