Vessel Financing In The '90s

Lenders faced a competitive and sluggish commercial loan market in 1993 and are looking at a number of industries, including marine, to generate higher commercial loan volumes. More lenders are doing marine deals today compared to five years ago, with the majority of them located or headquartered in the Gulf or on the East Coast.

What has changed over the last several years to help generate more interest in the marine towing industry from the financial community?

It's been a decade since we've had the grain embargoes and a major recession in the shipping industry.

Shipping has been healthy for some time and the number of ships calling on ports (West Coast) has remained steady. Many ships are now too big to transit the Panama Canal and their increased size has meant bigger and more powerful tugs are needed to perform ship assist work. Shipping is expected to remain strong as the national economy continues to expand and our weakened dollar helps generate more grain or other bulk exports. That's good news for inland operators.

It's been close to a decade since the domestic oil and gas industries went through a major recession. The price of a barrel of oil has recovered from its record lows and is now hovering around $19 a barrel (at press time). Construction activity and seismic work is up. Activity in the Gulf of Mexico is the busiest it's been in some time. Strengthening natural gas prices, along with deregulation of common carrier pipelines, have also helped spur activity.

The activity from these industries tends to drive the workboat economy. Vessel utilization has firmed up, forcing up charter rates and the market values for workboats. Day rates are the highest they've been since the late '70s.

During the past 12 months, we've seen the inventory of available good used tugs drop, causing the selling prices of tugs to climb.

Other vessels such as supply boats, utility boats, crewboats, and certain types of barges are experiencing the same.

Other market segments, such as the cruise vessel and tourboat companies, did not suffer from the recession as much, and this market for used vessels has remained stable.

The higher costs of building new passenger boats under the new U.S.

Coast Guard (USCG) standards have put a premium value on the used market, especially those with SOLAS certificates.

Breaking Into The Business With all this optimism, why aren't there more lenders interested in going after marine business? First, it's difficult for any lender who doesn't have time-proven industry experience to jump in and start doing business with a complicated trade like marine. History has taught the surviving lender to start slowly and build on experience and knowledge. Second, the marine trade has become more complicated with issues facing the industry today that didn't exist 10 years ago.

Whatever affects operators directly or indirectly affects the lender as well.

Lenders need to look at the regulatory and environmental influences in addition to an operator's balance sheet, in evaluating financing decisions.

The first and probably the most important issue is the risk of unlimited liability to the operator and possibly the lender from the Oil Pollution Act of 1990 (OPA '90).

Bareboat charters, as a tool for financing vessels, have almost become extinct because of the potential liability. Conventional lenders acknowledge the risks from OPA '90 as well, especially in the event that the vessel being financed should ever be taken over by the lender.

One incident in particular involving a 1,000-gallon diesel fuel spill cost the lender $200,000 in clean up costs. Some lenders don't want anything to do with certain types of vessels hauling black oil and others have put limitations on the types of cargo their vessels can carry.

Not everyone in the financial community is informed about the impacts of OPA '90; many are reacting out of fear, perhaps rightly so. There is also the question of obtaining adequate insurance coverage, especially against pollution and tort claims. How much insurance is enough when you have unlimited liability?

Another area impacting many companies' operations is federal and state regulations such as the proposed required emissions by the EPA for vessels operating in Southern California, or the Endangered Species Act and its impact on companies operating in the Pacific Northwest.

It's been demonstrated how politics affected the West Coast timber and fishing industries, and those in the industry are now wondering what impact politics will have on marine towing.

USCG regulations are becoming more challenging to keep up to date with, as well. Good examples include changing USCG requirements for tank barge vapor recovery systems and the proposed performance requirements for tug escorts. These items may have an impact on a company's operations and the useful life and market value of a vessel.

The fundamentals for evaluating vessel financing requests have remained the same, focusing on the operator's ability to repay the loan.

Proving the operator's ability to generate sufficient revenues to repay the debt should be an operator's primary goal for loan requests. Providing CPA Reviewed or Audited Statements along with projections goes a long way in establishing credibility with a lender. Most lenders have gotten more sophisticated in analyzing an operator's ability to generate cash, and reviewed or audited statements provide the necessary data to help evaluate the financial part of a business.

A lender's ability to approve marine loans is generally determined by its credit underwriting policies and its previous industry experience.

Lenders are still only willing to be involved in industries where they haven't been hit by large losses and most have adopted their own minimum financial strength requirements for underwriting loans.

Choosing The Right Lender How do you go about choosing a lender? Do you stay with one you've known for a long time, or do you test the waters to see what other institutions are offering to make sure you're getting the best deal? The primary goal of an operator should be finding a lender who has the industry experience and willingness to give you a loan with the terms and pricing you desire. Last winter, Safeco was asked to do a poll for the American Waterways Shipyard Annual Conference regarding trends in vessel financing which involved contacting a number of marine leaders nationwide to report on their financing practices.

It was found that some institutions were interested in lending only against certain types of vessels, and this should probably be one of an operator's first questions when approaching a lender. Some lenders have strict guidelines on the amount they can advance against a vessel while others will advance 100 percent of the cost if the credit quality is there.

There are fewer lenders who are set up to do construction financing.

Lending Policies There are very few lenders who are willing to be all things to all companies. The possible exceptions are the marine engine manufacturing financing subsidiaries. These companies are doing some of the most aggressive lending today, with extended terms and minimal investment required by the operator, provided the operator is purchasing their engines. For venture capital requests, Safeco found a few firms willing to act as a lender of last resort if the operator was willing to grant the lender a minority equity interest to help offset some of the risk in the transaction.

The majority of financing done today is still with conventional loans. As one of the speakers at a recent conference on vessel financing in Seattle, I summarized the lending policies of 14 marine lenders.

The survey showed that lenders active in marine loans today have become much more focused on the markets they want to serve and the type of vessels they are willing to lend against. Presentations were also made by the federal Maritime Administration (MarAd). Mar Ad financing offers the longest terms in the industry today (typically over 20 years), normally at a below-market rate, but not without its cost. One of the operators at the conference discussed their last MarAd loan package and said that MarAd is a viable choice, but the economics have to be right to put up with the reporting and fee requirements. The pricing and terms offered by conventional loan sources in the market place are attractive enough to question whether MarAd financing makes sense. It all depends on the operator's goals and needs.

The key is to know who to go to for a loan.

Once the right lender has been found, use the tools described above to get a project funded.

Today, lenders are doing everything they can to retain good business.

Some lenders may help customers find an alternative funding source or participating loan requests with other lenders if they can't provide the financing themselves, to retain the customer's loyalty.

Providing exceptional customer service has taken on a new meaning for doing business in the '90s. 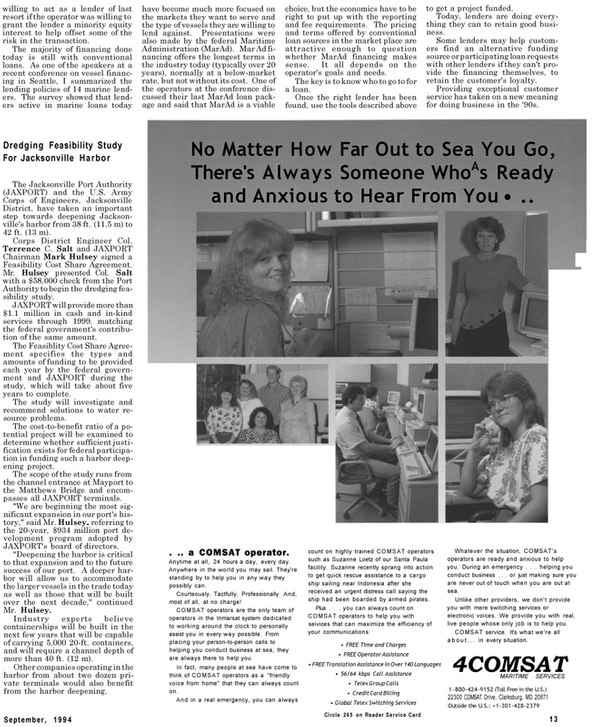 Read Vessel Financing In The '90s in Pdf, Flash or Html5 edition of September 1994 Maritime Reporter