Within days a so-called "tuna war" hit the headlines with ax-wielding Spanish fishermen boarding British drift netters and news broke of a spate of newbuild orders going to foreign yards amid accusations of unfair government subsidies.

Despite EC edicts, national rivalries will not go away and Spanish trolling fishermen were reportedly not happy with the netting activities of both British and French boats among the dwindling tuna stocks of the Bay of Biscay, a stock which they have traditionally thought of as their own. Both the British and French governments dispatched fishery patrol vessels to the area with little positive effect—the British ship promptly falsely arrested one of its own nation's boats (called by some an attempt to perpetuate a reputation for fair play) while the French navy reportedly fired water cannons at Greenpeace's Rainbow Warrior.

Additional discord was sparked off, although almost certainly unfairly, by the arrival in the remote Shetland Islands (part of the U.K. to the north of Scotland) of Altaire, a 243-ft. (74.2-m), 2,500-ton fish capacity Norwegian built dedicated tank trawler which, if not the largest of its type, is definitely one of the most sophisticated. Built for local owners at a cost of almost $15 million by Langsten Slip & Batbyggeri AS of Tomrefjord, the vessel is a pure pelagic trawler of all welded steel construction powered by a Wartsila Wichmann main engine developing 4,330 kW (6,000 hp) driving a four-bladed CP propeller inside a nozzle, with Brunvoll thrusters at both bow and stern.

Undoubtedly Langsten Slip's considerable expertise in building sophisticated vessels of this size was instrumental in obtaining the order.

News, however, that orders were about to be placed with Norwegian yards by Scottish owners for two 190-ft. (58-m) ships and that the Parnica yard in Poland is to build a 90-ft. (27.5-m) vessel brought forth cries of "foul play" from several quarters, especially as this followed the recent success of Spanish yards in obtaining orders from the same region.

The Polish situation is complicated by rumors, currently under investigation, that EC aid money is finding its way into shipyards in Poland, although the successful yard contends that cheap labor rates are responsible for its price, rather than subsidy. The problem is, however, how to define an illegal subsidy.

Would a large long-term government contract for, say, sectional steel storage tanks, a contract that most shipyards could easily fulfill, be considered a shipbuilding subsidy?

Clearly, such a contract would help a yard offset overheads, keep skilled people in productive work and, with a little co-operation, aid cash flow — enabling it to be just that shade more competitive.

National characteristics play a large part. In the U.K., the country perhaps most affected by losing orders, the argument is put forward that the government needs to learn to play the game by the rules as others apply them and to be as considerate to its industry as its European neighbors are to theirs — "fair play" can have another meaning.

Cygnus Marine, located at the other end of the country in Cornwall, renowned over the years as the U.K's most prolific builder of GRP crabbers, netters, potters, longliners and small trawlers with a multitude of well proven molds, has recently shipped three identical 33-ft.

(10-m) longliners to the Seychelles. 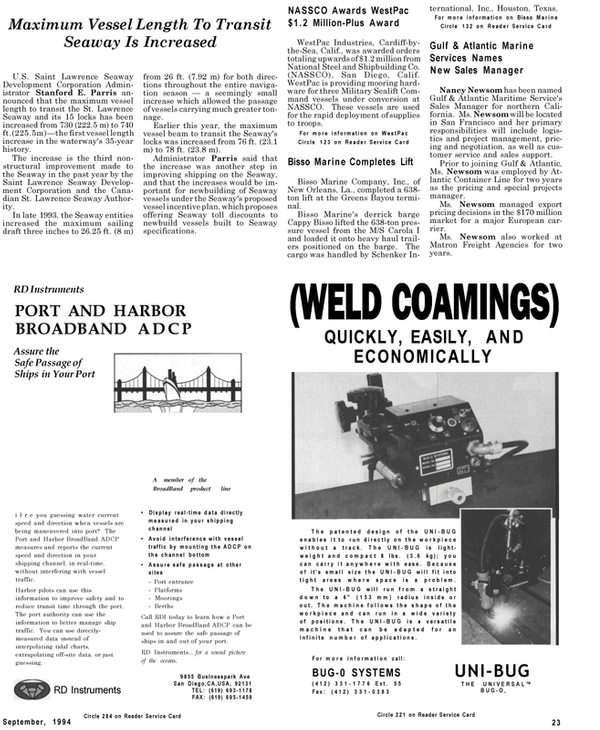