The Instituto Espanol de Comercio Exterior, ICEX, (Spanish Export Institute) will bring together more than 50 companies in the Shipbuilding, Machinery & Marine Technology International Exhibition (SMM Hamburg), in the biggest ever Spanish representation in a tradefair of the marine sector.

Spain is to be the official Partner Country at SMM, widely regarded as the most influential ship machinery exhibition in the world. Its exhibitors in 1998 came from 42 countries and attracted over 36,000 visitors from 50 different countries.

The Spanish national pavilion will be the biggest in SMM 2000 and cover an area in excess of 1,000 sq. m. In these confines will be 27 equipment manufacturing companies, four of them engine manufacturers, plus three engineering companies and five service specialists, which, together with 12 shipyards, will give a fine sample of the very best that Spain has to offer in this sector.

Spain's representation will also include five associations, two national and three regional, to give, between them, a good idea of the whole sector.

SMM 2000 is scheduled from September 26-30 in Hamburg, a fitting host as one of the world's foremost shipping cities. Last year Spain's shipbuilding industry had a turnover in excess of $ 1.4 billion, of which 85 percent was for export; these activities generate more than 40,000 jobs in Spain. The Spanish shipbuilding sector boasts 51 shipyards and can tackle complex projects like FPSOs and shuttle tankers built to operate in the North Sea or dual drilling units for the Gulf of Mexico. 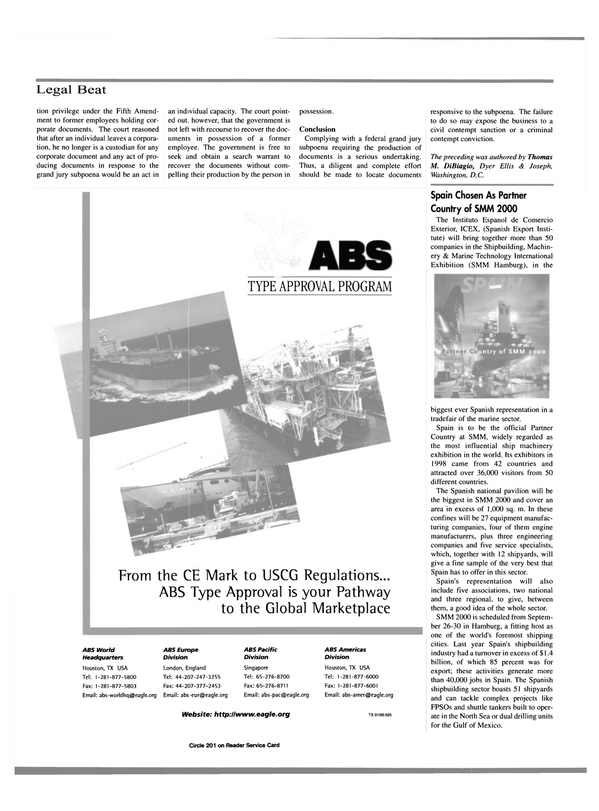