A Practical Discussion Regarding Compliance

Maritime businesses are increasingly becoming the subject and target of federal criminal investigations. This is due.

in part, to the increased emphasis on the enforcement of the criminal provisions of labor, customs and environmental regulatory provisions. A federal investigation of a business or corporation typically begins with federal agents serving a grand jury subpoena requiring the business to produce corporate records and documents. The subpoena requires that the business undertake a diligent and thorough search for the documents called for by the subpoena. Typically.

the subpoena will also require that the business present a custodian of records to the grand jury to testify as to the process employed to search for and gather responsive documents in order to satisfy the prosecutor that the company has produced all documents called for by the subpoena.

Recent Legal Development A business or corporation is required to turn over all documents that are not privileged — including documents that reveal your wrongdoing. A corporation does not have a Fifth Amendment privilege to refuse to produce documents in response to a grand jury subpoena on the grounds that the documents would tend to incriminate the corporation.

2284 (1988). While a current employee is not entitled to raise the Fifth Amendment as a shield against producing documents, there is a mitigating evidentiary privilege to reduce the risk that the individual will incriminate himself in the course of producing such documents.

The government is precluded from using the act of production as evidence against the individual. A current officer and employee have no Fifth Amendment privilege to refuse to produce corporate documents on the grounds that the act of production itself would tend to incriminate him. The question that has remained unanswered, until recently, was whether former employees had any right to decline to produce corporate documents in response to a grand jury subpoena.

The federal court of appeals is divided on this issue. The Third and Ninth Circuits have held that former officers of a corporation have a Fifth Amendment Right to refuse to produce corporate documents in their possession after they terminate their employment. The federal court of appeals for the Eleventh Circuit and District of Columbia district court has held that they do not.

In connection with the corpora- tion's compliance with the subpoena, an attorney for the corporation met with Doe One and Doe Two separately and requested that they produce responsive documents. Both individuals produced some documents, but were alleged to have retained others. By July of 1997, both individuals had left the corporation's employment. A third individual, Doe Three resigned from the company in mid-July 1996, after the June subpoena was issued and served. The corporation's attorney attempted to contact Doe Three to inquire whether she had responsive documents, but was unable to do so.

In January of 1999, the government discovered that a former company employee had in her possession incriminating corporate records that were responsive to the 1996 subpoena but were not produced by the corporation.

The government then served a fourth grand jury subpoena on twelve former employees, including Doe One, Doe Two and Doe Three requesting that they produce documents relevant to the investigation.

The court of appeals affirmed the district court and applied the act of produc- tion privilege under the Fifth Amendment to former employees holding corporate documents. The court reasoned that after an individual leaves a corporation, he no longer is a custodian for any corporate document and any act of producing documents in response to the grand jury subpoena would be an act in an individual capacity. The court pointed out, however, that the government is not left with recourse to recover the documents in possession of a former employee. The government is free to seek and obtain a search warrant to recover the documents without compelling their production by the person in possession.

Conclusion Complying with a federal grand jury subpoena requiring the production of documents is a serious undertaking.

Thus, a diligent and complete effort should be made to locate documents responsive to the subpoena. The failure to do so may expose the business to a civil contempt sanction or a criminal contempt conviction. 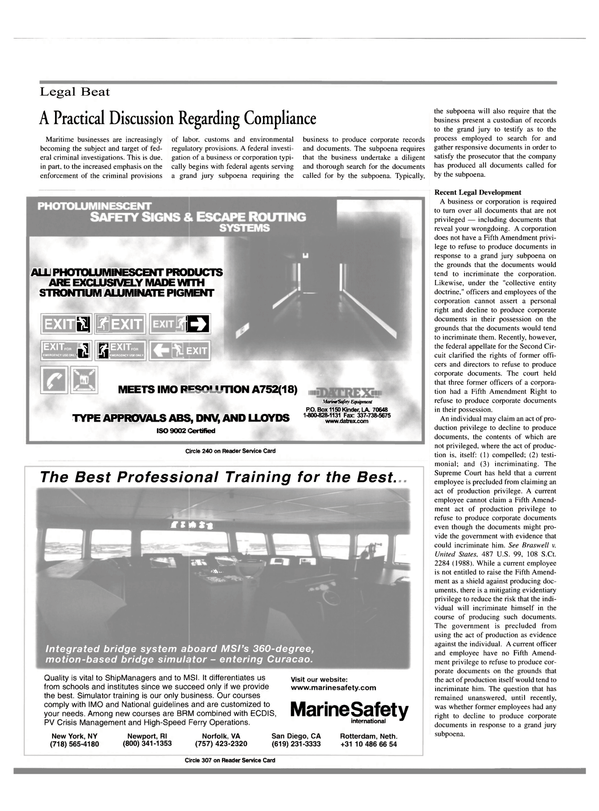 Read A Practical Discussion Regarding Compliance in Pdf, Flash or Html5 edition of June 15, 2000 Maritime Reporter