Setting a Course For Stability?

To characterize the business of carrying oil aboard tankers of any size or route as stable — would be foolhardy at best. But as curious as the market's undulations may appear to those on the outside, it is in fact the market's instability that serves as stability.

Owning and operating a fleet of petroleum carrying tankers has undoubtedly become a much more scrutinized and legislated endeavor than any time past. The eyes of the world, individual nations and even specific "environmentally sensitive" regions are on constant watch, prepared to strike with the broad sword of legal action in the unlikely event of an incident or catastrophe.

The heightened sense of legal responsibility has undoubtedly changed, and will continue to shape the tanker business. Simply put, the need to invest in advanced shipboard equipment and systems, to ensure proper training of the entire crew, and to acquire and properly mantain a sound fleet of ships — whether it's five or 500 ships — is essential to building and maintaining a successful business.

This point was made abundantly clear with the break up and sinking of the Erika last December, an incident which left French beaches badly soiled and European legislators hurriedly conferring on the action to be taken regarding older tankers in European waters. This one event, while obviously not solely responsible for the yearlong tanker scrapping binge experienced in 1999. is serving as a lightening rod for the "buy new, scrap old" push.

According to data from London shipbroker Simpson. Spence & Young, there were 99 commercial tankers scrapped in 1999, representing 14,358,138-dwt.

While these totals are indeed impressive and would have been thought to help substantially boost tanker rates and prospects, it must be countered with the fact that there were 194 tankers (19.139,118-dwt) delivered in 1999, leaving the world with a net gain of 57 tankers and about 1.8 million-dwt.

Beyond the literal effects of increased legislation, Erika has had a profound effect on the psyche of companies that own and operate tankers. Despite conclusive evidence from such noted and respected sources such as Oslo-based Intertanko that age in and of itself is not a determinant of a tanker's ability to safely operate, there has been a noticed turn away from 1970's built tonnage and a preference for new ships. Given the explosive public response against all oil carrying companies in the wake of any disaster, it is little wonder that the "buy new" philosophy is as prevalent. Combined with the fact that, astonishingly, the price for newbuild tankers has stayed steadied — or in many cases — actually dropped, the fact that shipowners are investing in new tankers should not be a surprise.

Markets Redefined The reality that it generally costs, in inflation adjusted dollars, less money to buy a VLCC today than it did nearly 20 years ago defies economic principles.

Exacerbating the situation further is the dropping prices in face of increasing demand, given the above referenced Erika incident and the increased business expected from OPEC's output upturn and the oil-hungry rebounding economies of the Far East. At the heart of the pricing conundrum is an excess of newbuilding capacity, particularly the mandate by Korean shipyards to expand capacity substantially in an effort to outperform its traditional shipbuilding rivals. While the condition has been long-lamented privately and publicly, particularly in the European shipbuilding community, and despite the recent "agreement" to curtail the number and level of subsidies, many officials and analysts speculate that the continued levels of output from Korea will lead to dire results for shipbuilders around the world. The scope of Korea's dominance, particularly in the tanker realm, is clearly evident in the numbers from SS&Y.

In the second half of 1999, South Korean shipyards secured 33 of the 62 new contracts placed in the July-December period. At the end of the year, its shipyards accounted for 55 percent of the tanker tonnage on order. By comparison, Japanese shipbuilders, which are saddled with a strong Yen, received only 12 tanker orders during this period, according to SS&Y. 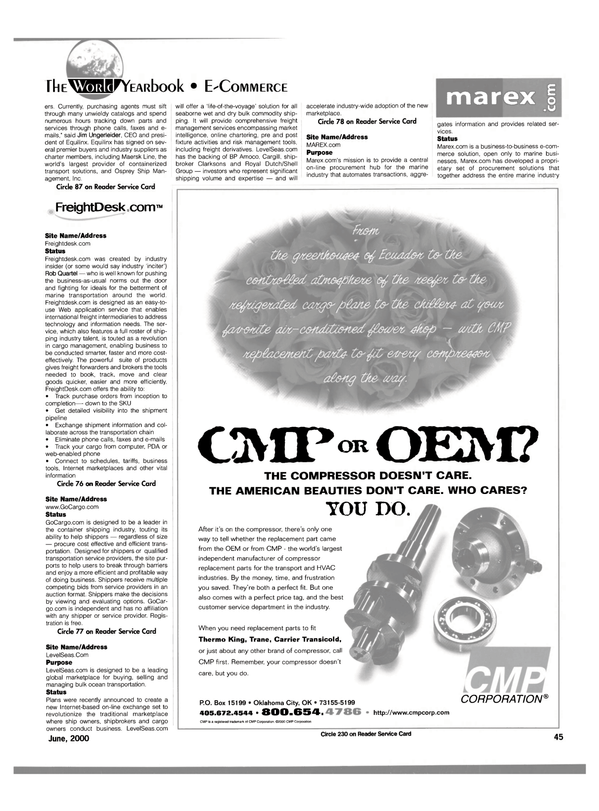 Read Setting a Course For Stability? in Pdf, Flash or Html5 edition of June 15, 2000 Maritime Reporter