b y D a v i d Tinsley, technical editor

A recent clutch of 'Rolls-Royce' shipboard equipment and technology contracts in Norway arising out of specialized, capital-intensive newbuild projects testified to the U.K. group's march into the commercial marine domain.

For sure, the emergence of the engineering group's name in new mercantile circles is the outcome of last year's acquisition of Vickers. and its Vickers- Ulstein Marine division, rather than the result of U.K. home-grown product diversification. But the new proprietor of the former Ulstein and Vickers' interests intends to build on the platform and integrated system opportunities offered by ownership of the industry's most extensive global network of marine equipment production.

Just as the takeover signaled Rolls- Royce's determination to enlarge its marine power business, the readiness of the absorbed companies to use the Rolls-Royce brand identity says something about the latter's standing in its established areas, especially the civil aerospace and military markets.

The various Ulstein and Vickers group businesses in propulsion systems, propellers, thrusters, waterjets. pods, steering gear, motion control equipment, deck equipment, control systems and marine design have been brought into the fold to complement Rolls-Royce's existing gas turbine and diesel power activities. As a consequence of the $848 million purchase, spurred mainly by the prospect of sustained growth in the marine business, the organization claims to be the largest supplier in its field.

Bob Sunerton, managing director of marine business at Rolls-Royce, said "The acquisition of Vickers will enable us to meet customers' changing requirements, offer a broader product range, and supply a fully integrated power systems capability." The company will address what it quantifies as a marine market worth $60 billion over the next 20 years, with the next five years expected to account for $25.5 billion of that. It reckons on marine market growth of four percent per annum, with power systems accounting for 15 percent of the market value. "As the trend towards fast ships and special applications determines high technology equipment, the proportion of value attributable to the power system will grow — over a number of commercial market sectors," said Sunerton.

Besides the all-important naval business.

Rolls-Royce is focusing on highervalue vessels for its drive in the commercial field. The accent is on offshore support and service vessels, cruise ships and ferries, and other specialized tonnage.

In addition to a generic-type concentration.

the focus will also be on system or 'package' solutions. "A market driven approach also benefits ship operators by offering dedicated solutions for integrated system packages and through-life product support," confirmed Sunerton. who also underscored the group's intention to continue to seek ways in which to develop its integration capabilities.

While the Ulstein Bergen and Allen ranges give Rolls-Royce a presence in the medium-speed diesel market over the 3-MW to 9.5-MW band, the core business standing in aeroderivative gas turbines takes the group's scope for unit power ratings beyond 50-MW.

Realization of the long-mooted Fast- Ship transatlantic cargo vessel project, in which each vessel would be installed with five Rolls-Royce Trent engines, would provide an enormous boost to the marque in the emergent market for large fast ferries and very large naval platforms.

FastShip would also showcase the largest waterjet design from one of the most prized elements of the Vickers' acquisition, the Kamewa.

Vickers' had completed its $447.5 million purchase of Ulstein Holdings in May 1999, to be quickly followed that September by a Rolls-Royce cash offer for Vickers, finalized in December. The process of rationalization and streamlining set in train after Vickers' bought the Norwegian-controlled group will now be taken a stage further under the Rolls- Royce ownership.

What this will bring remains to be seen, but the combination of Ulstein Bergen and Allen diesel ranges will be one outcome. The integration of interests reflecting the earlier conjunction of Ulstein and Vickers is already evident in the adoption of product range names such as Ulstein Aquamaster azimuth thrusters, Kamewa Ulstein controllable pitch propellers and Rauma Brattvaag deck machinery.

While the FastShip program provides an outstanding, but as yet conceptual reference, American Classic Voyages' newbuild scheme represents one of the most prestigious commercial marine projects in the U.S. involving Rolls- Royce group-supplied equipment. Each of the 72,000-gt luxury cruise ships from Ingalls, the first large passenger vessels to be built in the U.S. in more than 40 years, will be installed with two 12.5-MW Kamewa Mermaid podded propulsors. Under the newly-created structure for the Rolls-Royce marine business, overseen in its entirety by Sunerton, naval activities have been put under the aegis of managing director David Price, while the commercial sector is headed by managing director Morten Ulstein, previously chief executive of Vickers Ulstein Marine Systems.

Marine capabilities have been organized into seven market segments, so that each customer's particular needs can be directly addressed by specialist teams in terms of vessel design, engines, propulsion equipment and deck machinery.

As a proven innovator, Rolls-Royce can be expected to continually invest in its expanded, chosen fields of technology in the coming years. Its track record in driving down unit costs while expanding business volume in highvalue fields is graphically demonstrated by the growth it has achieved in aero engine market share over the past 12 years, from eight percent to 35 percent.

Italian platform for electric drives Italy's private shipowning sector, fundamentally concentrated in relatively small or family-owned businesses, continues to demonstrate both resilience and flair, and a receptivity to new design and engineering concepts. In the latest demonstration of a holistic and farsighted approach to newbuild powering, Savona-based Finbeta has endorsed diesel-electric propulsion in a new chemical tanker application.

The Finnish-developed system involved, distinguished by its elimination of the usual need for propulsion transformers, was selected by virtue of a clutch of cost, efficiency, operational and space- and weight-saving benefits.

It was only chosen after detailed evaluation of the various powering options, starting with consideration of a typical, diesel-mechanical configuration.

Constructed at Ancona by Cantiere Navale Morini, the 12,000-dwt Turchese provides a new platform for the ABB system based on two 3,300-kW PWM(Pulse Width Modulation) drives.

PWM technology, whereby frequency converters control sturdy, standard induction cage motors, offers system simplicity, reliability and efficiency factors, maximum torque in either direction and other operational plus factors such as an exceptionally high power factor, soft start and smooth control. Hitherto, the concept has been mainly employed in the marine environment on offshore vessels and cablelayers. 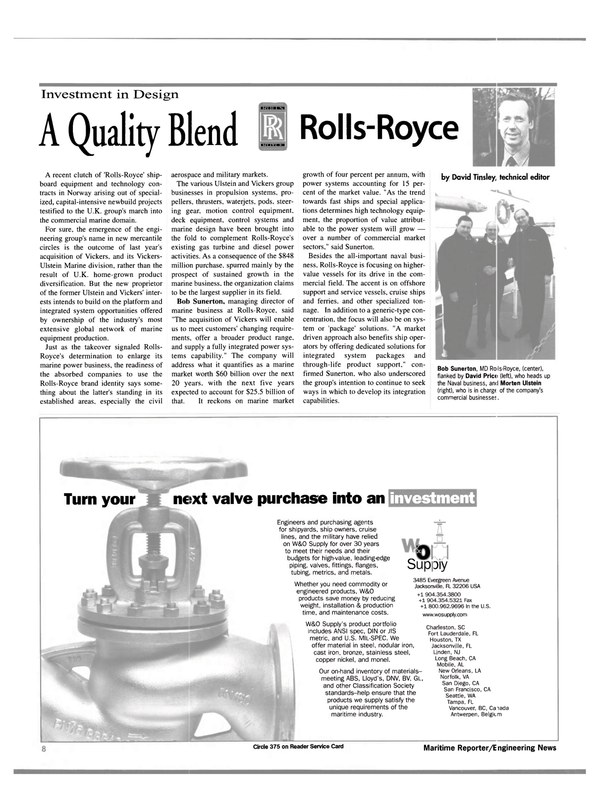