The last in a series of innovative, nextgeneration technology drillships left the building ways of Astilleros Espanoles' Astano yard recently, heading for a neighboring shipyard for final fitting of its six massive Aquamaster thrusters.

Discoverer Deep Seas, at the time of visit to tour the ship in Ferrol, Spain in early May, was dockside in nearby Bazan for the task of placing its six propulsion units, as task made easier by Bazan's deeper water facilities.

Discoverer Deep Seas, along with its sister ships Discoverer Enterprise and Discoverer Spirit (the former named MR/EN's Great Ship of 1999), embody not only the latest in drillship technology, but is a clear indication of the Spanish marine market's adherence to techni- cal excellence and building prowess, particularly in the face of lower cost, subsidized competitors in the Far East.

Discoverer Enterprise — delivered in late 1998 — and its two sisterships are Ultra Deepwater (10,000 ft.) Dynamic Position Drilling Units which are literally loaded with a bevy of advanced marine propulsion, and electronic products and systems, which qualify them as some of the most advanced tonnage built. Measuring 834.5 x 124.5 x 62.5 ft. (254.4 x 38 x 19 m), the ship is a virtual floating, working community, dedicated to recovering resources from some of the most remote areas ever ven- tured by man.

The heart of the vessel, arguably, is an Integrated Automation System (IAS), which is used to provide control and monitoring of the vessel marine and safety systems. The Bridge/Control Room is the primary control center, staffed and located within the accommodation module. As the very nature of the business of these high value ships is that of potentially dangerous situations, critical systems feature redundant central process venunits within process station. Additionally, the system can be subdivided in the following systems: Vessel Management; Power Management; Thruster Control and Dynamic Positioning; Extended Wheel Test Control; Drilling Automation; and Fire & Gas Emergency Shutdown.

To ensure operation in the event of fire or flooding, one thruster in the forward and one in the aft is segregated.

Technical Challenges While the creation of a successful design for these series of vessels for Transocean was obviously the largest and most prominent construction issue, it is clear that innovation onboard the drillships went straight through to the delivery of Discoverer Deep Seas.

Upon touring the vessel just prior to delivery, Francisco de Bartolome Fuijosa, the engineering manager, provided keen insight to slight, yet significant changes incorporated into the ships. For example, special anchor supports were mounted outside of the hull to support the load during the critical mooring phase. (See picture far right). Also, as previously mentioned, each of the three vessels was moved to Bazan for final fitting of th Aquamaster thrusters (see picture, bottom page). Astano engineers, with manufacturer support literally developed their own system of installing the units based on the physical limitations of the yard. Drastic improvement regarding the installation of these valuable units, as would be expected, was seen from the beginning to the end. For example, it took four days to place the first unit on the first vessel, while installation aboard Discoverer Deep Seas was two units per day. The four massive 80,000 capacity cranes, designed for handling of the drilling risers, BOP, removal of the thruster motors and other machinery equipment, presented their own technical challenges.

Specifically, the crane pedestal was modified from the first ship to the last, with Discoverer Enterprise sporting cylindrical pedestals while Discoverer Deep Seas' cranes stability was enhanced with new shape, illustrated on page 7.

Astano: A matter of survival While it is obvious that Astano, along with most if not all of its European ship and offshore building colleagues, are concerned regarding the expansion of building capacity and technical expertise within the Korean shipbuilding community, it is obvious that it will fall back on traditional strengths to fend off competitor's best shots.

For example, Research and Development, activities, which had slowed considerably at Astano over the past two years as most efforts were geared toward the successful completion of the Discoverer series, are now stoked and focused on developing a new FPSO design geared for ultra deepwaters (waters from 3,000 to 10,000 ft.).

According to de Bartolome Guijosa, the engineering manager, challenges inherent in this design will be mooring and station keeping capabilities. Meanwhile, Astano, again like all of its offshore building colleagues, are eagerly awaiting the upturn in offshore business due to the rising and sustained price per barrel of oil. According to Luis A.

Mendez, the big areas of interest currently are offshore Africa, with a pair of contracts pending decision relatively soon.

The first project is the Amenam Field in Nigeria, a project calling for a 2.4 million barrel FSO. A decision the Elf project builder was due at press time. The second impending project is for Texaco and involves the Agbami Field, a project which will require an FPSO in the range of two million barrels with a production rate of 200,000 bpd.

A decision on this vessel is due at the end of the year. While the West African projects provide the best overall offshore projects at this time, the tenuous political situation has dampened hopes and provided a string of problems for the oil companies. 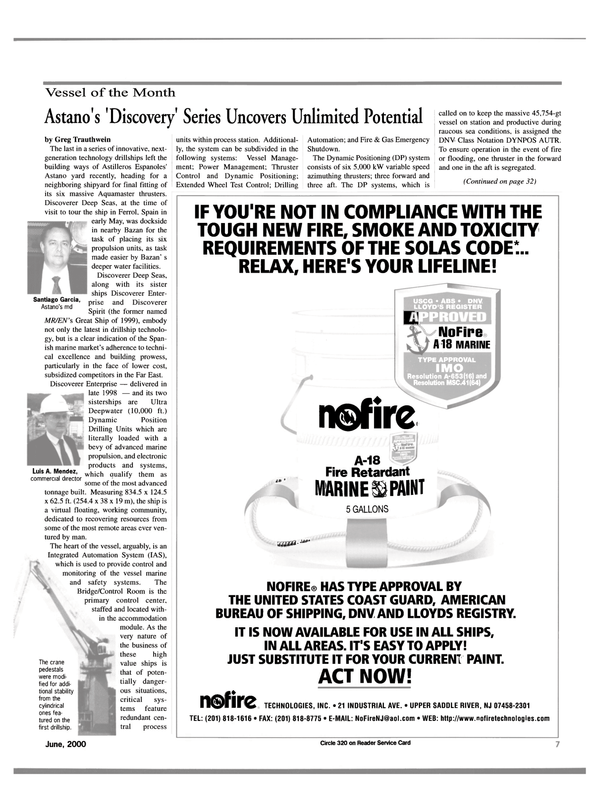