The New Age of Containerization

While the 1970s could be called the decade of the tanker, and the 1980s that of the bulk carrier, without a doubt the 1990s will be most widely recognized in maritime circles as that of the containership.

Explosive fleet growth — from 1.768 million TEU in 1990 to more than five million TEU estimated by 2001 (source: Clarkson Research Studies) — coupled with corporate consolidations has conspired to create operational and cost efficiencies that promise to drive the industry for the next decade as well.

Until the early 1990s, fixtures in the containership market were not even equal to that of the Handymax bulker segment. In 1980, the entire fleet was comprised of 750 ships, versus the 1,800 recorded by the end of 1995.

While the move to containerization has been pronounced, it has been marred by rate instability due in large to the almost surreal level of newbuilding activity in the early- and mid-1990s. In analyzing the Container Market Movements in its report. Maritime Industry - Spring 2000 Outlook, ING Barings notes that there has been a noticeable shift in the ownership profile of the orderbook between the charter owners and the operators owners (liner) over the past 12 months or so, a trend which ING Barings reasons indicates superior strength and profitability in the charter market.

The orderbook registered an average of 24.9 percent of the current fleet in order to meet these demands. From 1993- 1994, charter rates for sub-Panamax vessels jumped more than 19 percent to $21,272, and continued to strengthen for the next two years peaking at an all-time high of $22,442 in 1996.

on the wings of its third year of low double digit fleet growth, rates began to slide in 1997. Saturated by the onslaught of new deliveries, the industry started to experience an overhang of existing capacity as strong world container traffic growth, which averaged 10.1 percent from 1993-1996, started to slow down.

As a result, average charter rates for Panamax vessels dropped 7.9 percent to $20,675, marking the beginning of a major fall-off.

Phase 3 (1998-mid-1999): The Asian Crisis and a Flooded Market: In 1998, the situation worsened when consumer demand suffered from the major economic crisis in Asia and Latin America.

World container traffic plummeted to 3.7 percent, an all-time low, and much below the level needed to offset the 12.1 percent fleet growth from 1998 (and prior years). However, the second half of 1999 brought some hope for a rebound.

Phase 4 (Second Half 1999-2000): Commence Recovery: Global economies in 1999 improved, and a significantly lightened delivery schedule saw only 5.4 percent fleet growth, the lowest level since 1981. In addition, world recorded container traffic returned to a healthy seven percent, leading the way for a supply/demand balance hat had not been seen since the early 1990s. Currently, average charter rates for Panamaxes, which hit a low in 1999 of $15,475, have climbed their way back to $18,750, and world traffic growth is expected to register eight percent in 2000. Despite the good news, there is not compelling proof that the worst is over yet. In mid-1999, a post- Panamax ordering boom began, which has pushed the orderbook past the one million TEU level for the first time since 1997, and the expected scrapping of 48,000 TEU does not even put a dent into the problem. While deliveries for 2000 are only equivalent to 11.5 percent of the current fleet and will not likely have a major impact on the fundamentals of the fleet, the psychology of what is to come over the next two to three years could. 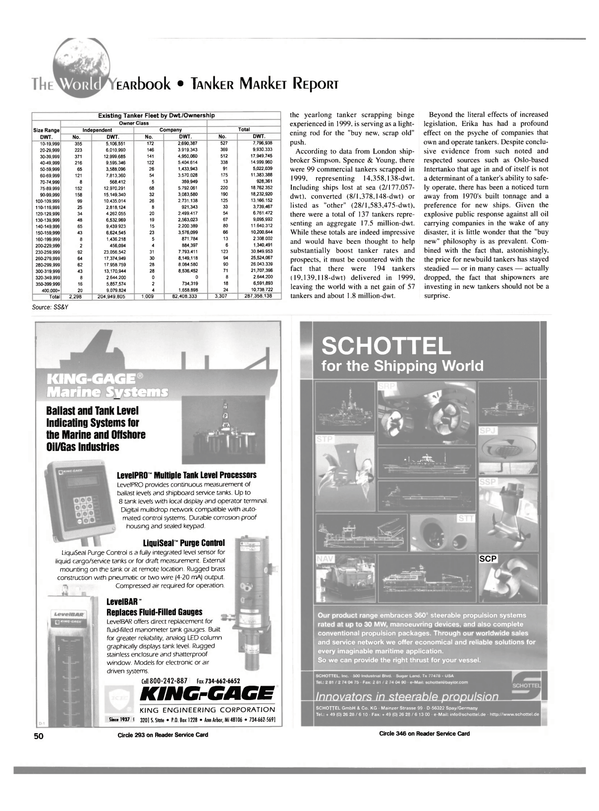 Read The New Age of Containerization in Pdf, Flash or Html5 edition of June 15, 2000 Maritime Reporter