The event, which is one of the industry's top social and philanthropic events of the season, drew a record 954 guests, and raised more than $550,000 for the Seamen's Church Institute of New York & New Jersey.

"We are grateful for the support of the maritime industry and our friends," said the Rev. Dr. Jean R. Smith. SCI's Executive Director. "Mariners are a vulnerable workforce and this strong show of support for the Institute's programs keeps our worldwide safety net strong." Richard T. du Moulin, President of Intrepid Shipping and Silver Bell Dinner Chairman since 1996, reported that 11 new companies joined SCI's loyal supporters.

Mid-way through the evening, the main event began — the presentations of the signature "Silver Bells" from SCI to Admiral Loy, and Grace Allen - both of who hold the backgrounds and contributions to merit this award.

Allen, who is the Chairman of SCI's Arts and Artifacts Committee, is an avid sailor, who has orchestrated many of the Institute's maritime art openings in the Water Street Gallery, located at SCI's headquarters in Lower Manhattan.

Through her efforts, she has given the general public an opportunity to appreciate a mariner's life through art and artifacts.

McMullen, a 1940 graduate of the Naval Academy, who served in the Pacific theater during WWII. He was awarded the Asiatic Pacific Campaign Medal and the World War II Victory Medal. His civilian career includes leading the U.S. Maritime Administration's Office of Ship Construction and Repair, and working as president and CEO of United States Lines — all before establishing the naval architecture firm that bears his name — John J. McMullen Associates. 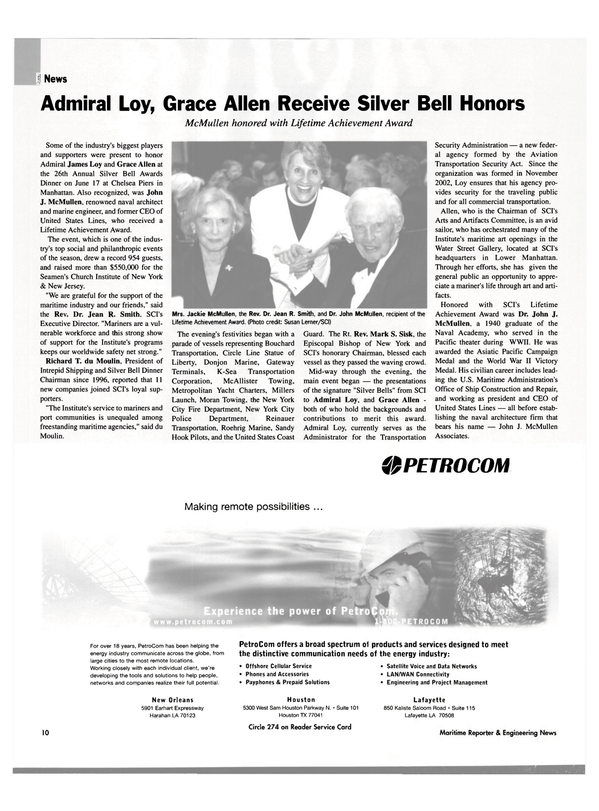