Coast Guard implement some (but not all) of the MTSA requirements and impose some additional requirements.

In other words. Congress has imposed various requirements on the owners and operators of ships navigating waters of the United States and the U.S. Coast Guard has not provided full guidance on how to comply with those legislative mandates.

Foreign ships subject to the International Convention for the Safety of Life at Sea (SOLAS Convention) seeking to operate in waters subject to the jurisdiction of the United States will have to undertake their ship security assessments earlier than might be necessary under the ISPS Code. Likewise, they will have to prepare their ship security plan not later than December 29, 2003 (rather than July I. 2004, as provided in the ISPS Code). All commercial ships will have to include in the vessel security plan submitted to the Coast Guard several items that were not listed by the agency in its July 1, 2003 interim rulemaking. As of July 1, 2004. all ships navigating U.S. waters must be operating in compliance with their vessel security plans. There are also differences between the implementation dates of the SOLAS Convention and the U.S. maritime security regulations for carriage of AIS equipment. Specific recommendations for navigating through these confused seas follow. Commence ship security assessment and ship security plan process immediately. Because the U.S. deadline for submittal of vessel security plans is six months sooner than the international deadline, the ship owner/operator must start the process immediately. Even if the process has been initiated, the timeline must be adjusted so that the plan is complete and ready for submittal to the U.S. Coast Guard on or before December 29. 2003.

The U.S. Appendix must contain the following elements, which are in addition to the international requirements: • Identification of the Qualified Individual with authority to implement the ship security plan.

• Explanation of how the ship security plan is consistent with the national and area maritime transportation security plans.

• Identification of security measures available under contract or other means approved by the U.S. Coast Guard, necessary to deter to the maximum extent practicable a transportation security incident or substantial threat of such a security incident.

• Provisions for a comprehensive response to a transportation security incident, including notifying and coordinating with local, state, and federal authorities (including the Director of the Federal Emergency Management Agency), securing the ship, and evacuating persons on the ship.

• A copy of the ship security assess- ment.

Recommendations on how to deal with the five elements of the U.S.

Identification of Security Measures The U.S. Coast Guard has not identified any specific security measures (other than those to be implemented by the company and the ship, under the ISPS Code), which should be included in the U.S. version of the ship security plan.

Rather, the Coast Guard has broad authority under the MTSA and elsewhere to mandate additional specific security measures to meet identified threats. It is therefore recommended that the U.S.

Appendix to the ISPS Code ship security plan include a provision to the following effect: The master, the vessel security officer, and the company security officer each have authority to implement additional security measures that may be directed by the U.S. Coast Guard. As necessary, these additional security measures may be implemented by means of contract or other means approved by the U.S. Coast Guard.

• A provision for securing the ship, addressing issues such as securing power and water; terminating cargo-handling operations; bunkering, and loading of stores; and doubling up of lines and other means of enhancing the ability of the ship to remain at its current location.

• A provision for evacuating all persons on the ship, including means for assembling in a safe location and accounting for all persons.

AIS The SOLAS Convention, as amended, has a timeline for carriage of automatic identification system (AIS) equipment, depending on the type vessel and its size.

The MTSA has a similar, but not identical, timeline. The maritime security regulations generally follow the SOLAS approach, but have special compliance dates for vessels transiting various vessel traffic service (VTS) areas. As most vessels engaged in international trade must be capable of entering all major ports, it is recommended that AIS be installed not later than July 1, 2004. unless an earlier installation date is mandated by SOLAS.

It is highly unfortunate that the U.S. Congress adopted a unilateral approach to addressing the multilateral problem of maritime security. The U.S. Coast Guard attempted to convince Congress that vigorous port state control efforts of international requirements would provide the nation (and the world) with a high level of security. Those efforts, though, fell on deaf ears, with Congress insisting on full compliance with the provisions of the MTSA. The owners and operators of ships operating in U.S. waters are stuck in the middle - with two masters issuing similar, but not identical, orders. The above recommendations are intended to address the gaps between the MTSA and the maritime security regulations promulgated by the U.S. Coast Guard. 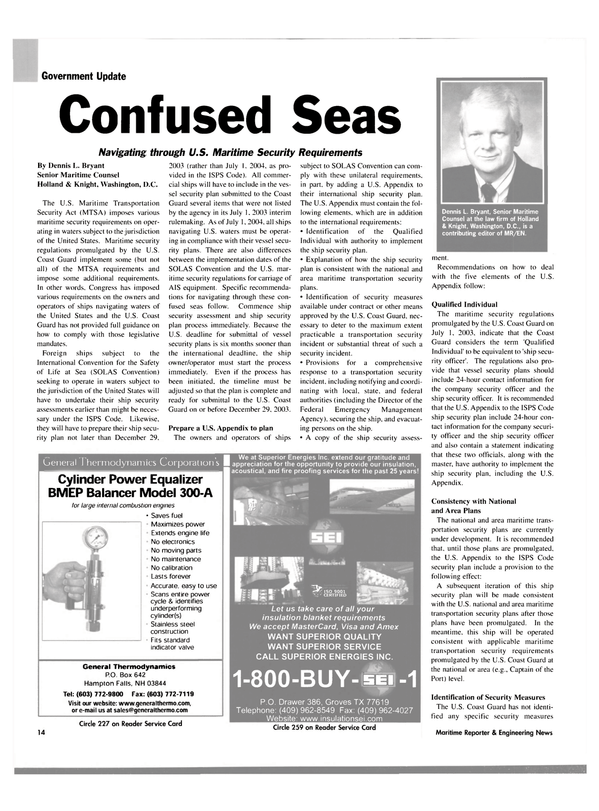